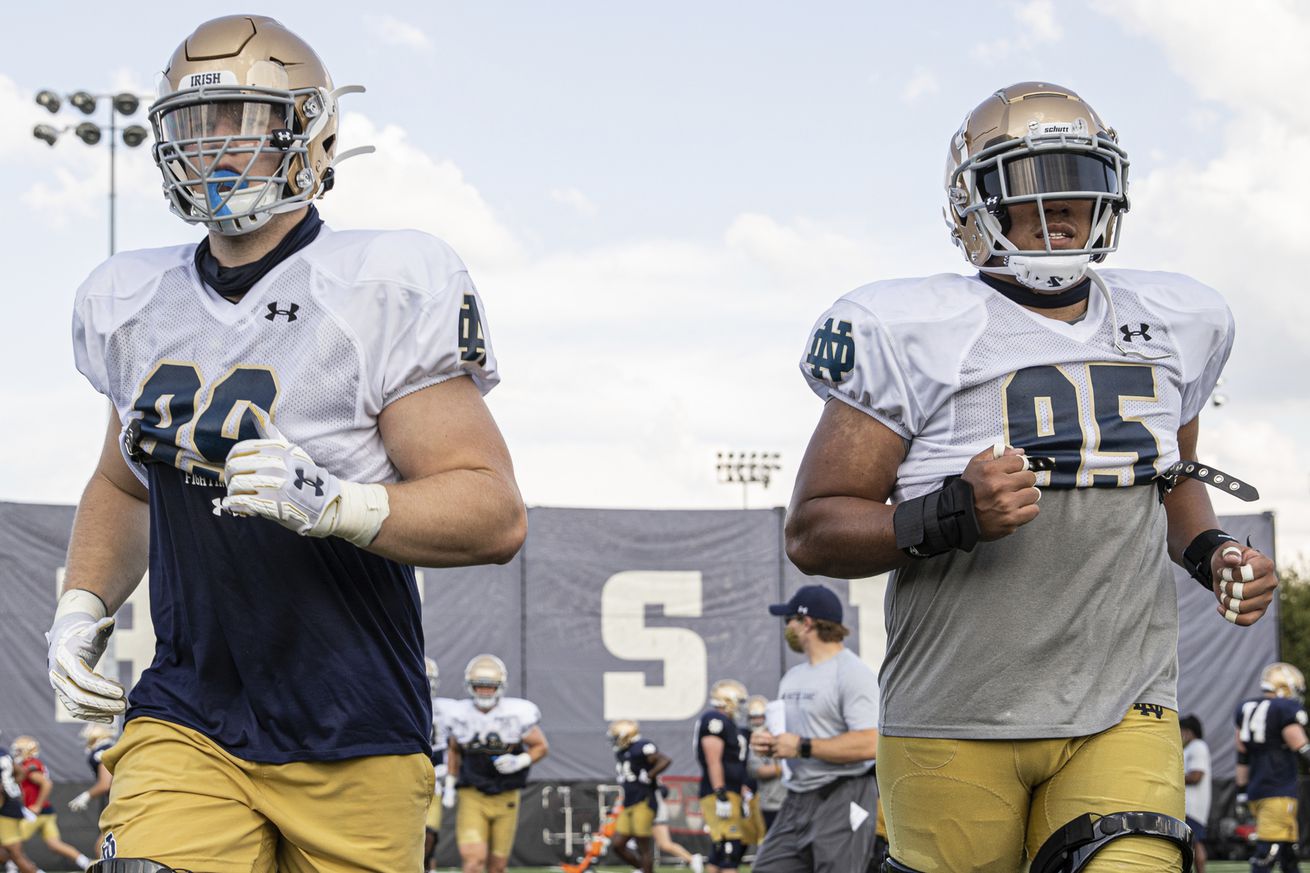 The Notre Dame Fighting Irish have started their fall camp practice to prepare for the 2020 football season. Because of the coronavirus pandemic, normal media coverage has pretty much been scrapped by Notre Dame. Only bits and pieces have been fed to us, so let’s take a quick look at what they put in my inbox last night.

Jordan Johnson is making quite the splash as a freshmen early on in fall camp. In this clip, Johnson takes a WR screen pass from Brendon Clark all the way to the house using speed and vision. Trailing him are his fellow freshman teammates Xavier Watts and Michael Mayer. What’s interesting and full of good feels is seeing Ian Book run over to celebrate with Johnson. Fans were often noticeably quiet about the 5-Star from Missouri on signing day — which is just weird. Johnson may very well become the biggest freshman contributor in 2020, which isn’t weird. (Special shout out to Zeke Correll hustling his ass downfield for the block).

To be perfectly honest, before spring practice was ready to start, I put Kyren Williams on a watchlist as a possible transfer candidate. When I looked at the running back depth chart and what was coming in — I wasn’t sure there was a place for Williams in his sophomore campaign. He is obviously proving my winter thought wrong right now in fall camp. Here’s a really nice run with the first team offense where he shows some of the shiftiness we craved when he was a recruit. (Special shout out to Javon McKinley down there blocking like a beast).

I love the Brendon Clark footage from practice, and this one doesn’t disappoint as he finds Lawrence Keys III in the back of the endzone. Keys looks like he beat 6th year senior cornerback Shaun Crawford to the punch on this one — well done. Keys is looking to lock up a starting spot in the slot this fall, and continued growth in camp will allow him to achieve that goal.

One of the most important defensive drills is the tip drill. How many games have been decided on an interception that was first touched by a different player? (Quite a few). We see the fruits of this labor in this clip as Ovie Oghoufo picks off a ball that wide receiver Micah Jones was unable to handle cleanly. Props to Ovie, but for as rocked up as Jones is, his hands may be what’s holding him back — I mean the dude is a freaking specimen.

That’s all for now, but we can expect more short clips in the coming days and weeks as we creep towards the season.