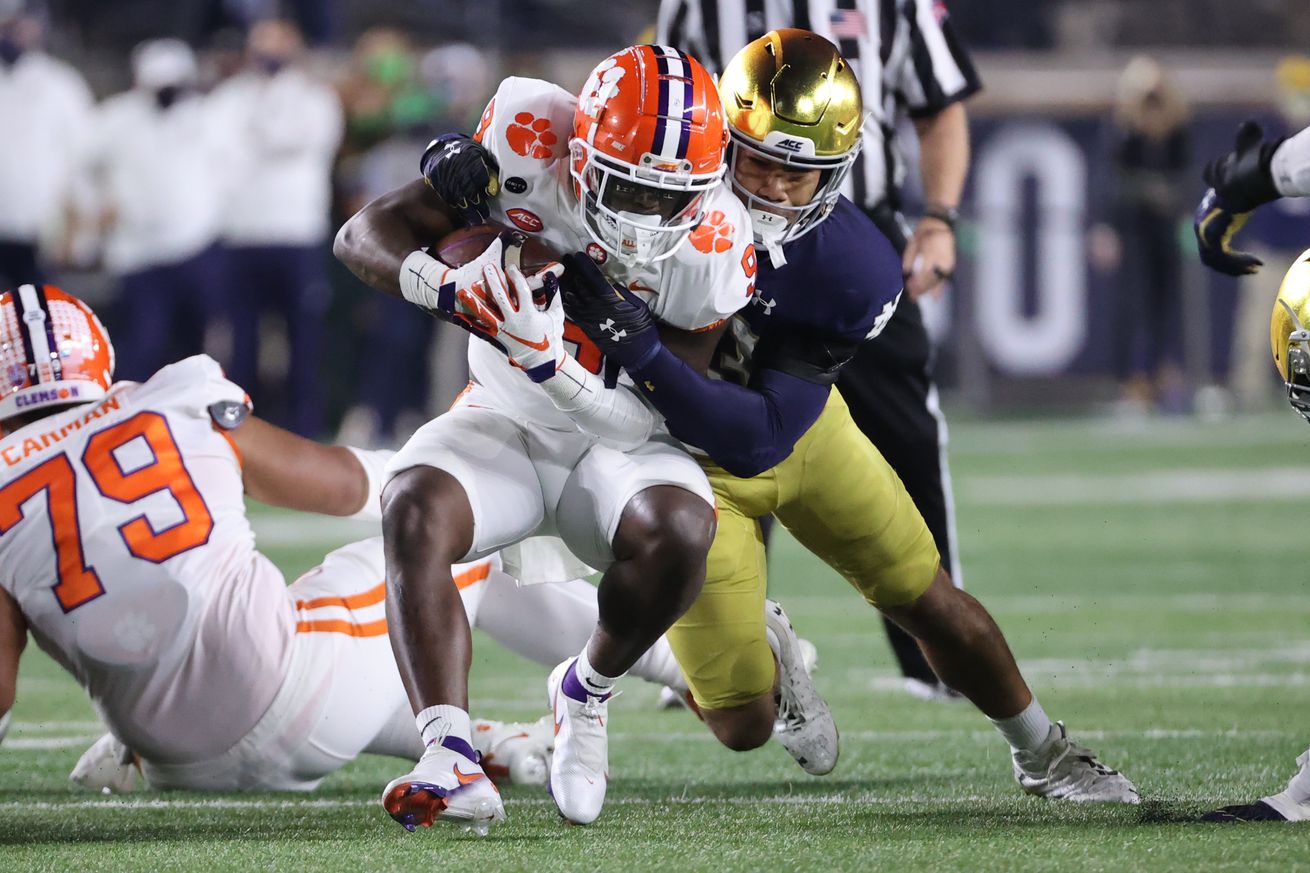 Legends were born – let’s talk about them

Folks, your Notre Dame Fighting Irish just got their biggest win of this century and took down the #1 Clemson Tigers. I was babysitting my 4-month-old niece for the entirety of this game, which kicked off just after her bedtime, and I was therefore required to yell into a pillow while leaping out of my chair and jumping up and down at numerous points. Worth it? Absolutely.

It was a win for which Irish players, coaches and fans had been waiting for years, and an instant classic. Let’s talk about three of the biggest narratives coming out of this game as the Irish prepare to confront some ghosts next week in New England.

As the third quarter wound to a close in this game, Ian Book was at a crossroads. His red-zone turnover on the last drive for the Irish was every quarterback, leader and athlete’s nightmare come to life. We have seen Notre Dame quarterbacks over the years shrink after moments like that; we have seen those plays be the death knell of many a valiant effort.

Not so for the Irish captain, who was unfazed by the moment and led a near-perfect stretch run late in the fourth quarter and in overtime. He made one play after another, both through the air and on the ground, every time it was needed. Playing with poise amid the highest of stakes, he rose to the occasion and etched his name into Irish legend. Whatever happens in the rest of Book’s career, whatever flaws he may have as a quarterback – no one can take this night away from him.

The Running Game Passes The Test

Coming into this game, pundits critical of Notre Dame pointed out that its prolific rushing attack hadn’t been tested by an elite opponent, and speculated that it wouldn’t hold up against Brent Venables’ masterful defensive schemes. But while Clemson certainly forced the Irish into a more balanced attack, the Irish rushing attack absolutely made a powerful imprint on this game behind a rugged offensive line and a terrific effort from the Bellyman himself, Kyren Williams.

It’s hard to overestimate the impact of a play like Williams’ second-play touchdown on a team trying to pull an upset; beyond the obvious early lead, it lit up the Irish crowd and sideline and made the prospect of a victory immediately real. Following that electric opening, Williams continued to rack up tough yards throughout the game while putting up a Herculean effort in pass protection, giving Ian Book time to find receivers and space to run. And when the Irish found the red zone in overtime, it was the Bellyman who punched the ball in both times.

Against a Clemson defense that, despite injury depletion, was still loaded with talent and physicality and led by one of the best minds in the sport, this running game proved it could produce on the highest level. Look forward to seeing them run over some lighter competition moving forward.

On Defense: Dynamism, Then Adversity, Then Heroics

The Irish defense gave up some points in this game, which comes as no surprise. A team like Clemson is always going to score points, but the Irish accomplished several things on defense in this game that completely changed its texture. They completely neutralized the best player on the field for either team in Travis Etienne, holding him to an incredible 1.6 yards per carry. Credit Kyle Hamilton and Jeremiah Owusu-Koromoah with shutting down the most dangerous man on the field, forcing Clemson to lean on the young DJ Uiagaleilei. JOK also played created points by generating turnovers early, helping the Irish build a lead they would absolutely need later on in the game.

While Clemson started to break through in the second half, the Irish defense didn’t quit and stepped up massively when needed. They got key stops after Book’s fumble and after the Irish turned the ball over on downs with only a few minutes left – stops without which the Irish could not have won. And when Clemson took the ball in the second overtime the defense emphatically shut the door, with consecutive sacks by Adetokunbo Ogundeji and Daelin Hayes making a turnover on downs all but inevitable. I sincerely don’t know if I’ve ever felt a greater sense of elation or anticipation while watching a football game than I did after Hayes’ WWE-esque leaping takedown of DJ Uiagaleilei, as Tiger blood finally seemed to be in the water.

The usual suspects will talk about injuries and asterisks; let them. The Irish earned every bit of the glory they will get from this game, and they did it against an opponent that absolutely looked the part of #1 in spite of the challenges they faced. What follows this epic victory? A matchup with the Boston College Eagles, which as we all know has never gone wrong before. But for now, let’s enjoy the most beautiful sight any of us have seen in some time.