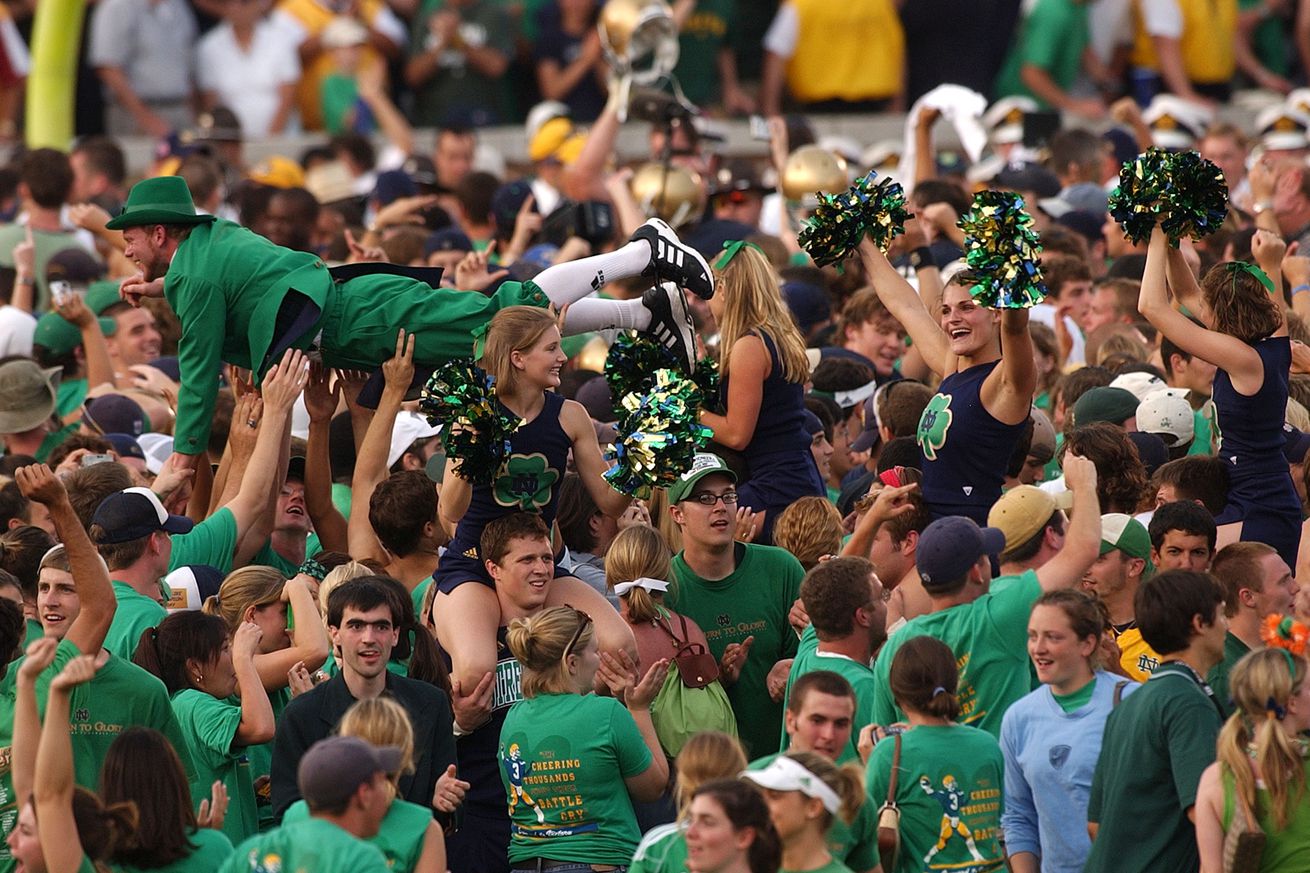 Just in case you need a new team because strangeness.

This whole coronavirus thing has everyone thinking outside the box — which isn’t a terrible thing in itself. There could be trouble on the horizon if our worst fears become reality (as far as college sports are concerned) and there is no college football season. These thoughts have my brain twisting and turning in a way that I haven’t felt since freshman year in college.

So let’s get really weird. Let’s imagine that for some reason the Notre Dame Fighting Irish end up being the only school NOT to have a 2020 season and then they disband the football program altogether for lawn darts. You’re going to need a new school, so here are twelve perfectly acceptable options moving forward from every conference in the FBS.

Here’s your chance to go back home. If your actual alma mater (or school you attended for whatever period of time) or your parents alma mater is in the FBS, you have every right to go in that direction fully-full on. This means that Notre Dame fandom would lose Ty Hildenbrandt to the Penn State Nittany Lions, Jessica Smetana to the Clemson Tigers, and myself to the Eastern Michigan Eagles (Hurons Forever).

If you’re sick and tired of Notre Dame losing the “big” game, here’s a program that will double your losses BUT give you that adrenaline rush of slaying top programs when there is no earthly reason why. Regardless of anything else… the uniforms are worth it.

Now that Notre Dame is no more, maybe Cincy can lock in more on its hometown prospects. It’s pretty Catholic down there, and Nippert is lovely. For people insisting that Navy should be played every year and still believe in Wookie life debts — well at least the Navy Midshipmen are in the same conference.

By this point we are on team 3 and haven’t left the Big East. Notre Dame fans are used to being outsiders, and no other school is more of an outsider in their own conference than West Virginia. BONUS: Singing Country Roads at the top of your lungs while setting multiple couches on fire is a great fit in a post-apocalyptic world.

At least you’re staying in the same state and now you turned the most boring game on Notre Dame’s schedule into the most exciting game on Indiana’s schedule — yes we’re talking about the Purdue Boilermakers. (All of you bastard double-sweater fans can come out of the closet now).

You love Joe Montana. Here’s your chance to go all in and do it in a very beautiful city. Honestly, this conference is an enormous grab bag and there’s no right choice, because there’s no wrong choice.

Maybe you want to keep your Independence that you loved so much with Notre Dame AND you crave that Navy high. This is your only real choice unless you’re LDS (BYU Cougars) or love believing terrible things (Liberty Flames). Also… that CAMO absolutely DRIPS.

I know there’s a pull here to want to go to Miami-Ohio Redhawks, but you can fight that urge and blaze a new route. If you’re lucky, Frank Solich will be coaching until he’s 132 years old.

Again… get your ridiculous Navy fix here. AFA also has an incredibly gorgeous stadium setting, and once we get into WWIII — the talent will just FLOCK to Colorado Springs. This is a sleeping giant.

Not quite what you were thinking, but it should be. In a world where Notre Dame no longer has football, how long will it be before the west coast falls into the Pacific Ocean after an earthquake? Look who’s laughing now [rolls up a legal fatty].

If national championships are the only reason why you watch college football, then buddy here you go. If Bama doesn’t have enough right now to suit ya — or if they never win another one — don’t you worry. Some Bama S.I.D. will just add 3 or 4 more in about 20 years anyways. You also get the added bonus of looking back at 2012 and not curling up in a ball of despair. ROLL TIDE!

Most Irish fans adopted Appy State back in 2007 anyways after they beat the Michigan Wolverines — so this is an easy transition (and the only real reason to pay attention to the Fun Belt).

Now that you have your options… who are you rolling with?