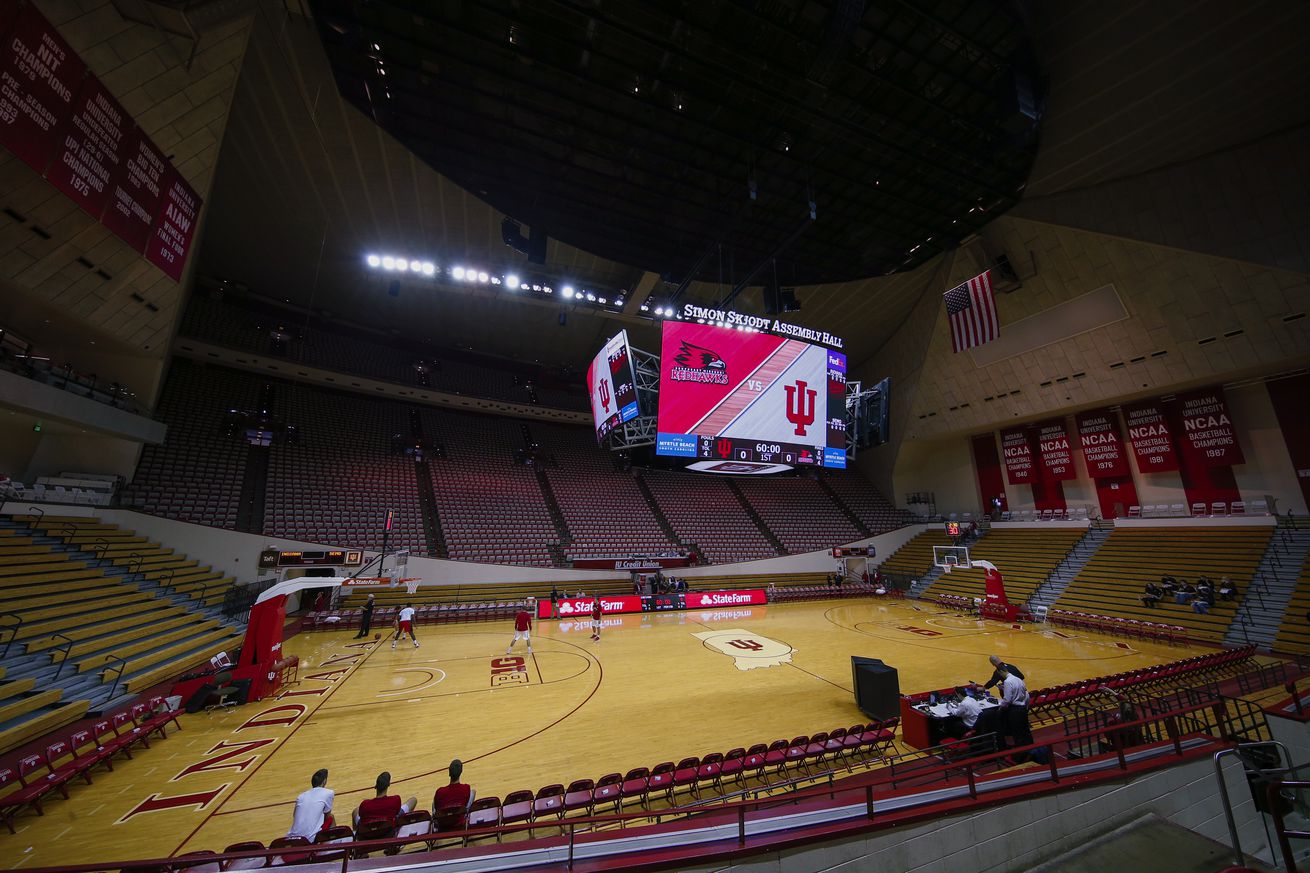 It’s a good thing there aren’t any historic rivalries that have been put on hold in recent years for unnecessary, self-preservation reasons!

We have no idea what the 2020-21 basketball season is going to look like and anyone who says they do is lying. But it’s a safe bet to assume it’s going to look and feel different from a normal year, whether the biggest change is that arenas operate with limited attendance or something much more drastic, like the season being canceled completely.

While reporting another story, I emailed Ken Pomeroy, the mastermind behind kenpom.com, and he said he believes “people are in denial about how many cancellations there will be and programs are going to be looking to find games with other healthy teams based on opportunity, whether they are conference games or not.”

So this is your advanced warning that a couple of IU’s currently scheduled basketball games might get nixed and a few new opponents might be late-adds to the Hoosiers’ schedule. Assuming geography is important in this scenario because of travel costs, state health laws and exposure concerns about the virus, what would IU’s ideal non-conference schedule look like in a world where college basketball scheduling turns into the first high school dance of freshman year and schools start desperately reaching out to the closest thing to them?

That’s right, it’s time to pull up Mapquest, hop on a Greyhound bus with questionable stains on the seat cushions and play those regional schools that you wished IU played more often.

Here’s IU’s ideal non-conference basketball schedule in a world where the Hoosiers can only play schools from neighboring states.

Imagine, for a second, that there’s a scenario where college sports thread the needle of a global pandemic this fall and winter, where it’s deemed safe enough to play sports, but too unsafe for schools to travel in ways other than charter bus or charter flight. In this world, many non-conference games, if not entire non-conference schedules, are thrown out the window by schools or their conferences, forcing healthy programs to schedule replacement games against regional opponents on the fly.

Now think about the lengths that John Calipari might go to in order to prevent Kentucky from playing IU under these circumstances, even though the Hoosiers are the ninth-closest DI school to Lexington and the biggest potential regional matchup for the ‘Cats outside of in-state rival Louisville.

Without fans in attendance, even an IU-Kentucky game played in Bloomington or Lexington essentially becomes a neutral-court contest, and isn’t that what Coach Cal wanted all along?

when john calipari is presented with a reasonable plan to bring back the IU-UK seriespic.twitter.com/KwumVWadFj

Call this the Jordan Crawford-Remy Abell Classic. Somehow, the two programs have played just nine times ever despite being separated by only 127 miles, with IU holding an 8-1 all-time advantage against Xavier.

Despite the creation of the Gavitt Tipoff Games in 2015, the Hoosiers and Musketeers haven’t been matched up in the Big East vs. Big Ten series in the five years that it has existed. Somehow the Big Ten school from south-central Indiana has played the Big East teams from Nebraska, New Jersey and Milwaukee, but not the one from [checks notes] southwestern Ohio.

“Hey, John. We’re thinking about doing something good for the community. What do you say, IU vs. Kentucky, and our share of the TV revenue goes to local charities?”

Oh, and our previous offer for these dates still stands. Play us and we’ll give the full guarantee check to charity to help within our state. https://t.co/WXfdxdPxJT

Haha, remember when IU turned down an invite to the CBS Sports Classic with Kentucky, North Carolina and UCLA because it already had the Crossroads Classic on the books?

It’s all good though. People forget that Butler played in the national championship game in 2010 and 2011, yanno?

If IU is going to remain committed to the Crossroads Classic, then why not make the most of it in a tough situation. Turn it into a two-day event – and maybe even three days if we want to give the Hoosiers an extra shot at beating the Boilermakers for the second time since Cody Zeller and Victor Oladipo left Bloomington – where every school gets to play the rest of the field in a round-robin format. Put all the teams up in Indy hotels for a night or two, pray no one breaks curfew to hit the town and break into the old Cadillac Ranch building thinking the mechanical bull is still up and running, and give IU a crack at Butler and Notre Dame (and maybe even Purdue in a rare non-conference game) on consecutive days.

The good news with this idea is that by allowing every team to play at least two games in the Crossroads Classic, Purdue will have a chance to double its win total in the event since the Classic started back in 2011.

Coach Cal’s order at Arby’s is the two-for-$6 classic fish sandwich deal. That’s as heinous as his avoidance of scheduling IU since the Wat Shot. Never trust seafood from a fast food restaurant, let alone one in a landlocked state.

Some people are saying that.

Let’s put the man behind the mic to the test and have IU schedule Bowling Green in the most milquetoast border battle ever. We’ll spice things up by requesting the Falcons be coached by the former coach who was there four head coaches ago.

Kentucky, but IU gets to be coached by Tom Crean for one (1) game that’s played retroactively in the 2016 NCAA Tournament

“The NCAA’s tournament’s hottest pod is the second round in Des Moines. This game has every-thing. The highest-paid coach in the sport melting down in the final eight minutes. Tyler Ulis with more turnovers than assists. Tom Crean shooting finger guns. Yogi Ferrell’s mom wearing customized t-shirts. The No. 2 recruit in the country putting up an offensive rating of 63 in the final game of his college career.”

Ah, simpler times. The things I would do to watch IU right now take between 30 and 40 3-pointers in a game, commit about 11 dumb turnovers in a 10-minute stretch and play generally fun, free-flowing basketball for 40 minutes, even if it meant I had to wait 45 minutes for the head coach to show up to his post-game press conference.

IPFW (or whatever they’re called now), but Tom Crean is not involved

In principle, the scheduling of this home-and-home series was great. There are 10 DI men’s basketball schools in Indiana, so the Hoosiers should play some of those teams often, even if it means the occasional road game. Better to play at Valpo than waiting to play your first road game at the Kohl Center, or something.

Even if IU loses, Fort Wayne has proven to be enough of a wild card of a fan base that maybe they’ll leave us with a gif that keeps on giving, like ol’ buddy who brought a big-ass roadie in a Clorox bottle back in November of 2016.

Kentucky, and Coach Cal gets a blank game contract to decide the terms of the series

IU basketball scheduling ambassador Mark Cuban tried to reignite the rivalry when he appeared on Coffee with Cal in April, which is ironic, because the only people tougher to strike a deal with than Kentucky after the ‘Cats lose in humiliating fashion to a regional, non-conference opponent are the sharks on Shark Tank.

“Hey sharks, I’m asking for a five-year series with a guarantee of 65 percent of the gate revenue, with the games being played in Lexington, Indianapolis, Las Vegas, Dubai and the International Space Station. Tom Crean, Yogi Ferrell and Victor Oladipo aren’t allowed to attend, or to even watch the games on TV.”

By the way, let’s revisit the transcript of what Cuban and Coach Cal said about the series.

Cuban: “Cal, I’m talking about right now. As we try to transition out of this, we need to get those first games — Lexington and Bloomington are so close. We flip a coin, decide where the game is played that way, we get on buses, we take the buses to whichever arena, and then we just throw the ball up, with fans or without, made for TV. If the NCAA doesn’t want to go for it, I’ll figure it out. … Let’s just do this. Let’s be that first game coming out for college athletics that gets the ball rolling.”

Hey, that Cuban guy seems pretty smart. Wonder how his career turned out.

Now we wait and see what comes next.