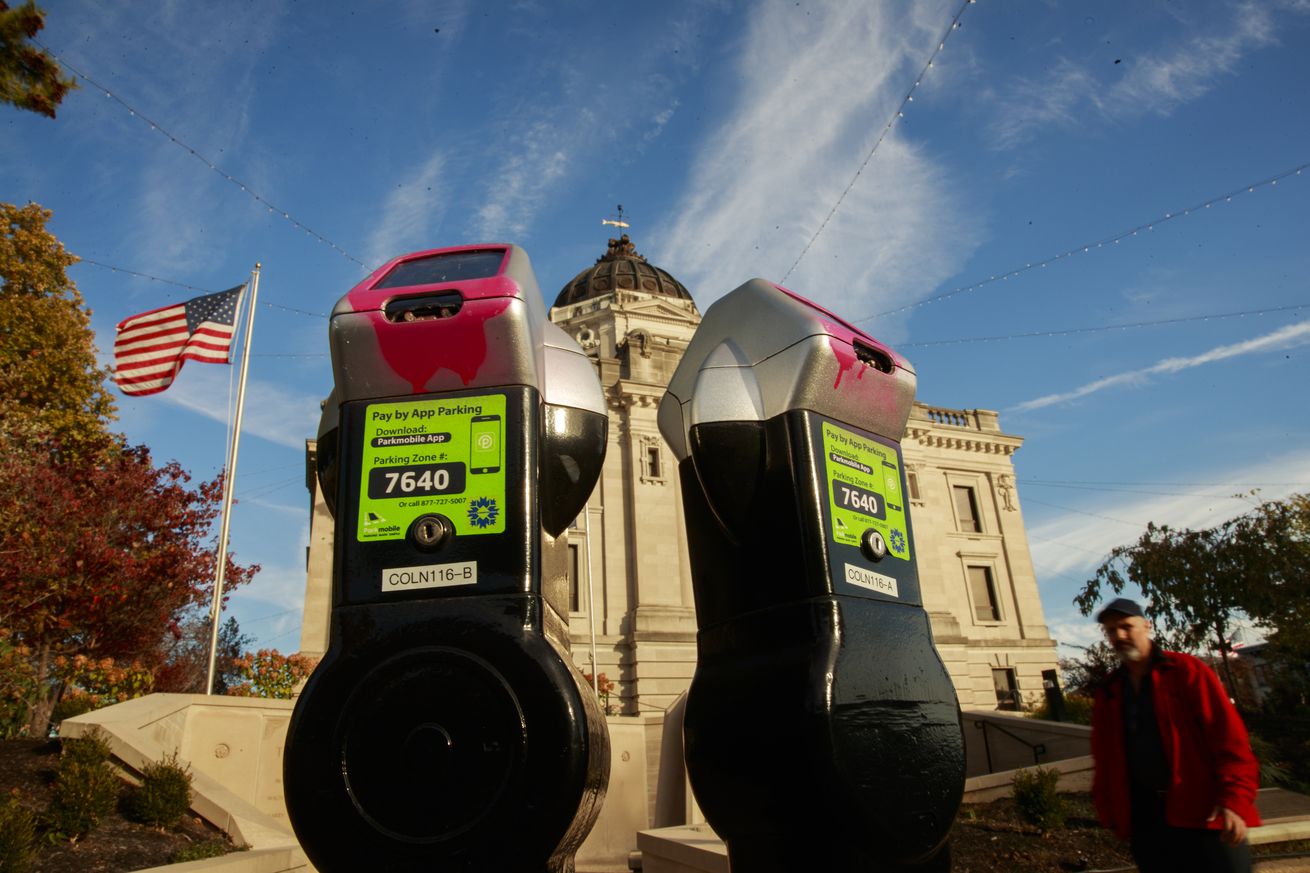 Pink paint covers parking meters on the square in Bloomington on Oct. 23, 2019. | Photo by Jeremy Hogan/SOPA Images/LightRocket via Getty Images

No, I’m not out of sports topics to write about, why do you ask?

Here’s another Lifestyle blog post from the people who brought you the Taco Bell on Walnut Hall of Fame. Man, it feels pretty good to be the first blog ever to cover sports, pop culture, music and tech, all in one place.

No worries if you stopped reading the last paragraph somewhere in the second line, because that’s about where I gave up on writing it.

The point being, there’s nothing going on in IU Athletics, at least in the ways we’re used to.

Maybe soon we’ll get back to a place where the IU men’s soccer team hasn’t allowed a goal in seven games, a grassroots Michael Penix Heisman campaign is building in the darkest crevices of Twitter, and IU’s top-25 college basketball team, coached by Teri Moren, is preparing for a 25-win season and an NCAA tournament appearance.

But today isn’t that day.

So we’re going to talk about parking tickets instead.

Thanks to the power of the law, CQ has obtained IU’s parking ticket data from the last four years (from the 2017-18 fiscal year to present), and we’re going to rank all 44 categories of them.

Quote from man towed: “What are you gonna do, tow me?

3. Citation Circumvented (186 total): This sounds like a failed James Bond reboot. “007: Citation Circumvented.” I’d watch a six-part docu-series about the people who got these citations, because the fact that they’re listed on the spreadsheet means they did, in fact, still get a citation in addition to their original citation.

4. Overnight Garage Parking (1,035 total): This is just classic 20-year-old galaxy brain thinking right here. “I’m in Bloomington for the night and I need a safe place for my car, surely the university won’t check one of [checks notes] the two main parking garages near campus to see if anyone is parking there overnight.”

This is like the summer when one of my roommates and I refused to actually invest in a downtown parking spot or buy a bus pass, so every morning we’d drive to work, park in the casino parking garage next door to our office, fully dressed for work – slacks, collared shirts that were tucked in, work bags, etc. – then walk through the casino at like 8 a.m., passing the people who were still up from the night before or who just needed a little jolt to start their work day. We’d walk past the casino greeters and security, who clearly knew we hadn’t walked in through the front doors of the casino, then we’d go to work. At the end of the work day, we’d do the opposite, walking back through the casino, taking the elevator up to the parking garage and going home.

Eventually, sensing the heat from casino security, I bought a bus pass. A few weeks later, my roommate’s car got towed from the casino.

You know better and yet you still do it. This is the Overnight Garage Parking experience.

This is the experience of being 20 years old.

5. Altered/Counterfeit Permit (80 total): For better (for the IUPD) and for worse (for our entertainment), these citations are decreasing at an alarming rate. Just look at these advanced analytics:

I’m pretty sure during my fifth year at IU, a parking pass was like $10 for a calendar year. Even on a college student’s budget, the cost was negligible. If anything, it was more annoying to have to go to city hall and fill out the form, especially when we had two extra ghost tenants in a five-person house and we had to provide proof of residence for everyone in the house.

But despite the Chipotle burrito’s worth of cost for a Bloomington parking permit, you have to respect the dedication of those who try to forge a parking pass, complete with the one-sided adhesive and shiny lettering.

By the way, there’s still one unpaid citation for an altered/counterfeit from the 2018 school year, which you know is being used as a pickup line at last call in a Broad Ripple bar.

“Yeah, that’s really sad about your roommate’s dog. Anyway, did I tell you about the time I used a fake parking pass in college and never got busted? Yeah, it was no biggie. Bartender, two more rum and cokes. What do you say we get out of here?”

6. Fraudulent Permit Displayed (108 total): Hold on, there are fraudulent permits, which are somehow different than altered/counterfeit permits?

How does it feel, sir or ma’am?

There was one tailgate where we fit, I think, 14 people in a car ride to the tailgate fields and no one batted an eye. My question now is just how many people does it take in one car to get a car pool violation?

9. Parked Opposite of Traffic (33 total)

10. Bicycle (118 total): The open-endedness of this category is intriguing.

16. Meter Expired (7,524 total): To everyone who’s come 25 cents short or 15 minutes too late on their parking meter, just know that your citation has been avenged, whether you know it or not. One of my friends in college, [redacted], once accidentally backed into a parking meter, knocking it to its side and partially uprooting the base of it. This friend, one of those people who lifted biceps/back four times per week at the SRSC, then pulled out the parking meter by hand, took it home and broke it open to get the change out of it. He then took the tracking device, drove to Lake Monroe and threw it to the depths of Davy Jones’s locker.

He did this for you.

20. Non Payment of Garage Fee (78 total): This is kind of like refusing to pay for the tow service. Without shifting space or time, how, exactly, do you get your car out of a garage without paying or taking off the mechanical arm at the garage?

25. Parked in Drive/Blocking (1,617 total): Surely, this classification is shorthand for cars that were parked in a driveway and were otherwise preventing someone from getting in or out of a driveway.

extremely Stephen A. Smith voice: HOWEVER.

There’s a 1% chance it could referring to someone “parking” their car but actually leaving it in “Drive,” which is way more exciting.

27. Permit Balance Due (336 total): Slap it on your student bursar and make your parents pay for it, right?

29. Vehicle Relocated (11 total): The word “relocated” feels like it’s doing a lot of work here, right? It sounds like the vehicle wasn’t stolen but it wasn’t moved with the owner’s consent, either. It was just “relocated.”

35. Event Parking (1 total): Once again, who are these people who are the only ones, out of more than 64,000 citations, who find a way to get cited for something that no one else has?

43. Other (See Comments) (1,801 total): If there’s anything I’m not going to do, it’s reading almost 2,000 comments about why some college kid got a parking citation. No thanks.