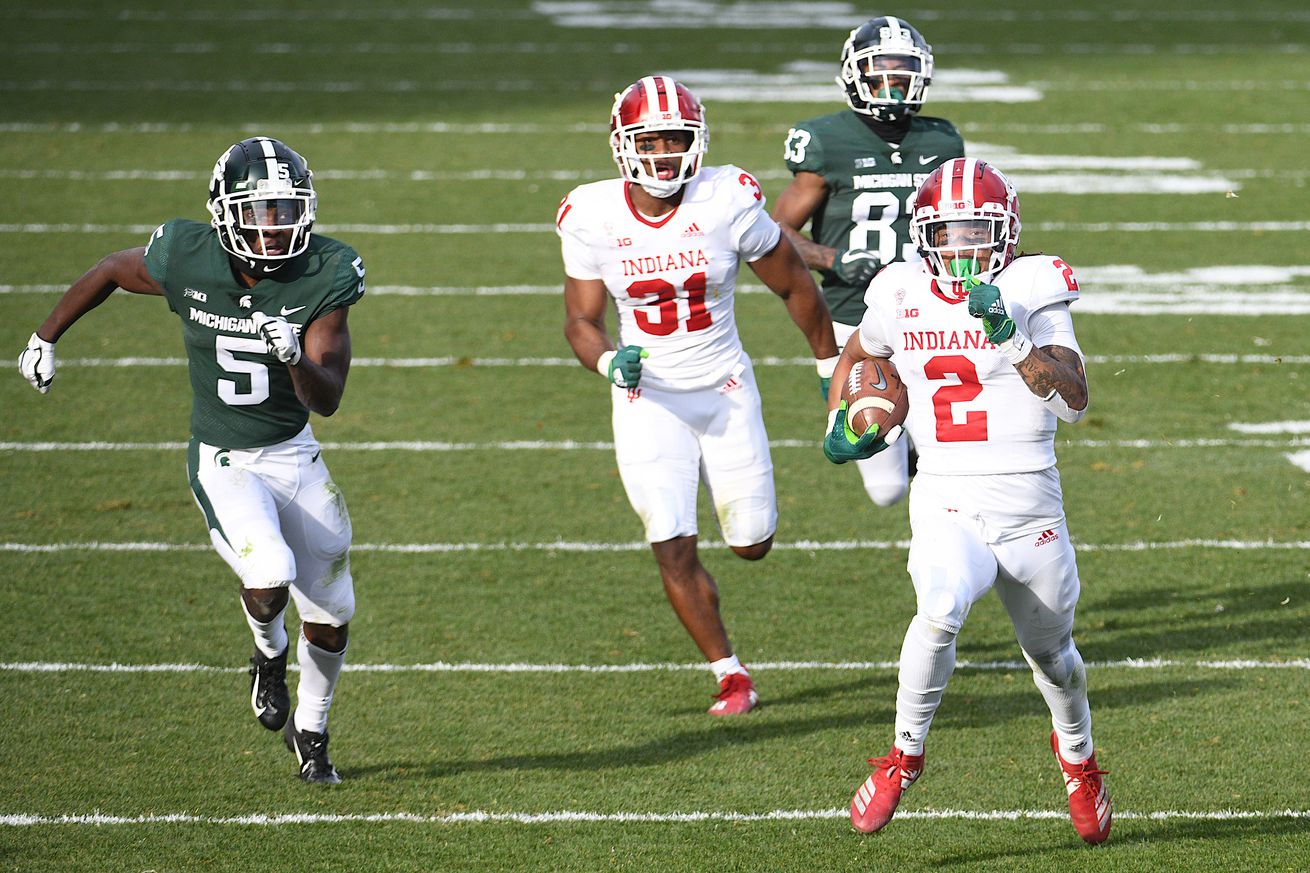 The Old Brass Spittoon is coming back to Bloomington. Just don’t spit in it this year.

For the first time in 19 years, Indiana is leaving East Lansing with a football victory.

And for the first time since 2016, the Old Brass Spittoon is in Hoosier hands.

Except that, this year, there won’t be any spit in it. Consider it another COVID casualty. After No. 10 IU’s 24-0 victory over Michigan State on Saturday, Tom Allen solemnly informed his team that launching spit into the most disgusting trophy in sports rivalry trophy was forbidden.

Somewhere in Texas, a single tear is rolling down the cheek of Ralph Green III.

Or maybe that’s spit — Big Ralph loved to spit. Yeah, it might be spit.

Ty Fryfogle is kind of a dude, isn’t he?

OK, so last week I wrote this:

The senior isn’t the first name that comes to mind when thinking about the Indiana receiving corps.

Well, Fryfogle might be now. In fact, he probably should. Saturday saw one helluva performance from the senior, whose career-high 200 yards are the seventh most in a single game in IU program history. For Fryfogle, 178 of those yards came during the first half, during which he hauled in nine catches and scored a pair of touchdowns, including this beautiful effort:

Ty Fryfogle would not be denied for No. 10 Indiana pic.twitter.com/EN6aE2RA44

Over the last two weeks he’s totaled 342 yards — or, in other terms, 56 percent of his total production from a season ago, when he posted only two games with at least 75 yards.

He’s been targeted 24 times in the past two games, which is telling. Fryfogle is asserting himself as a go-to player inside the offense, and his quarterback trusts him to be there when needed.

Once again, Indiana’s defense paved the path to victory. This isn’t the first time in Tom Allen’s IU coaching tenure that we’ve seen a strong and, at times, overwhelming defensive group, but it’s certainly a sight to behold.

The Hoosiers’ penchant for takeaways have earned the headlines so far this fall, and rightfully so. Indiana was right back at it again on Saturday, finishing with three interceptions and one fumble recovery. IU made the most of those moments, too, scoring 20 points off of turnovers and seizing upon Michigan State’s habitual sloppiness.

Tiawan Mullen recorded two of those picks, the first of which was — incredibly — the first of his career. Indiana has now intercepted passes in five consecutive games. On Saturday, the ability to keep that streak alive helped negate some of the miscues on the other side of the ball.

There’s a lot of room for improvement

If you didn’t watch the game, it might not be apparent. But Indiana’s offense was … not good. Michael Penix wasn’t sharp — he threw two interceptions — the ground game was unimpressive and, just overall, the ability to finish drives was lacking.

The combination of Michigan State being Not Good and Indiana’s defense being Very Good helped bring this victory into port. The Hoosiers’ offense? Well, they didn’t offer as much help as they could have.

This had the potential to be — and you can certainly argue that it should have been — a 45-0 win. Or something thereabouts. But Nick Sheridan’s unit struggled to consistently find the right gear.

The rushing attack probably tops the list of needed improvements. Up front, it didn’t feel like the Hoosiers were winning the matchups they needed to win, especially in short-yard situations. At the same time, it should be noted that IU was without both starters on the left side of its line, tackle Caleb Jones and guard Mike Katic. Even so, it’s been an area where consistency has been missing across all four games.

There will be plenty to clean up once IU gets home and reviews the film, and the Hoosiers will need to do a lot of tidying ahead of next week’s trip to Ohio State. But, as we mentioned three weeks ago, it’s a lot easier to coach when you’re coming off a win.

It’s off to Columbus, where the Hoosiers and Buckeyes will match up for command of the Big Ten East. Just as we all expected. Ohio State took an unplanned bye this weekend after a spike in positive COVID-19 cases forced Maryland into a pause, so the Buckeyes will be well rested. Will that help or hurt Ryan Day’s group? Either way, it figures to be an interesting afternoon at Ohio Stadium.