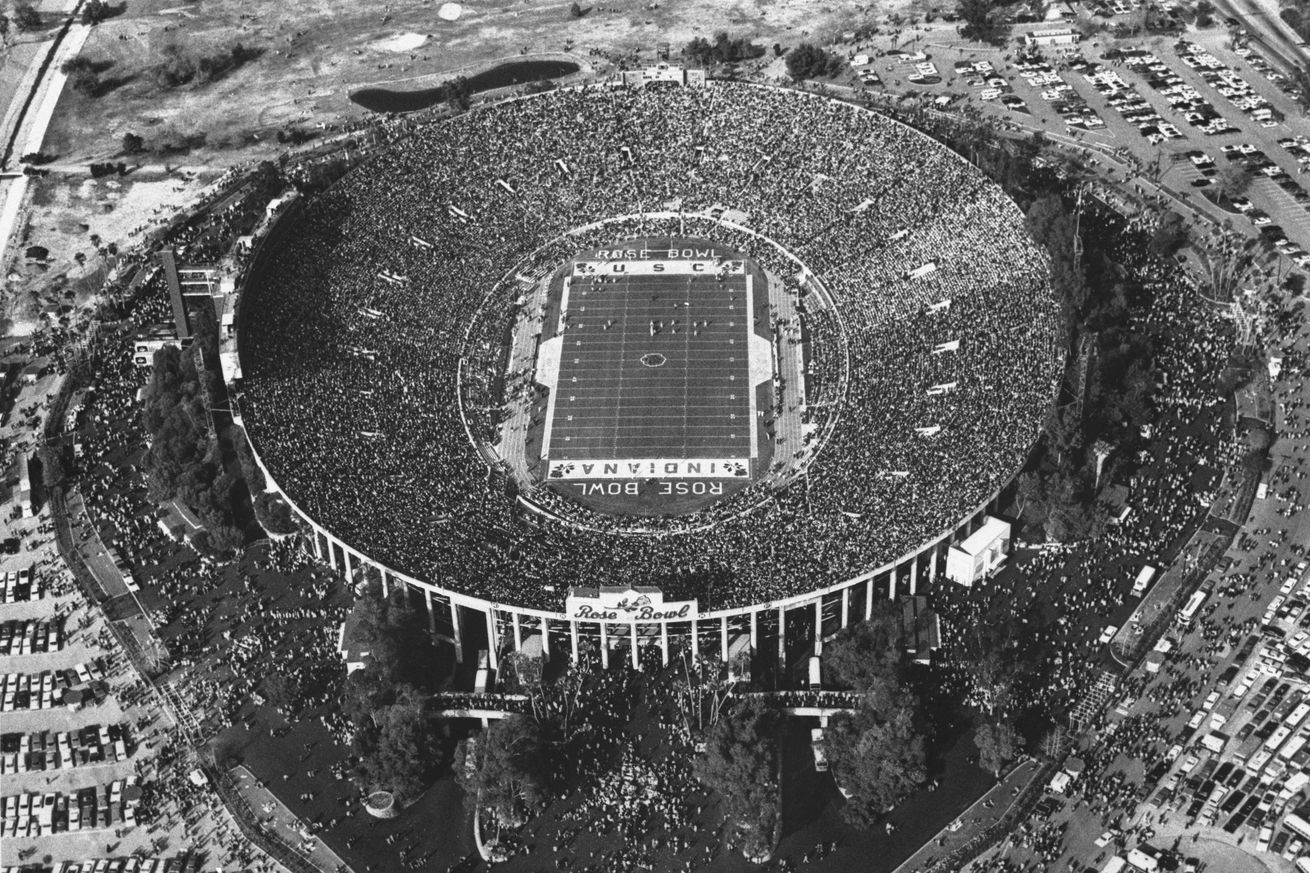 Yesterday, we started our countdown of the biggest games in IU football history. You can read Part 1 here.

I’m already getting cold sweats and painful flashbacks about writing about a bowl game in which IU lost to Tennessee while scoring 22 points. The Hoosiers’s magical 1987 season, which is the only season in program history (so far) where they beat Ohio State and Michigan in the same year, ended with a Peach Bowl berth.

It was the program’s first of two Peach Bowl appearances in a four-year span and it was part of a five-bowls-in-six-years stretch that brought the highest level of sustained success IU has ever had as a program.

A win would’ve brought IU a 9-3 season that featured its first-ever Peach Bowl win and arguably its most impressive bowl win ever, along with wins over No. 9 Ohio State, No. 20 Michigan and No. 17 Tennessee. The Hoosiers, who spent six weeks in the AP poll that season, likely would’ve finished the year in the AP poll, which only ranked 20 teams back then. That had only been done four times previously in IU history.

Similar to IU this season, the Hoosiers’s 1988 team was coming off of an eight-win campaign and likewise, they took an unbeaten record more than a month into their season.

The Hoosiers visited No. 20 Michigan in mid-October, when they had the chance to earn bowl eligibility before Halloween, while having beaten Ohio State and Michigan in back-to-back seasons and for just the second time ever.

It was a chance to improve to 4-0 in the Big Ten with four conference games to play, including three at home.

Instead, the Hoosiers got rolled 31-6 as they lost three out of four games to finish the regular season 7-3-1.

What was at stake: A path to a potential second-place finish in the Big Ten

1987 was a special year for IU athletics, because in addition to the men’s basketball team winning a few games, the Hoosiers went 8-4 in Year 4 under Bill Mallory, as he took a team that went 0-11 in 1984 and turned them into a team that three years later peaked at No. 11 in the AP poll and played in the Peach Bowl.

The ‘87 Hoosiers are the only IU team in history to beat Ohio State and Michigan in the same season, and they went to Iowa City for a game on Halloween with a 6-1 record and 4-0 start in Big Ten play.

Having earned bowl eligibility in their first seven games, the Hoosiers were now playing for a potential conference title and a really good bowl game. They could’ve cracked the top 10 in the AP poll if they had beaten the Hawkeyes, rather than losing 29-21, and they were staring at a potential 5-0 start in Big Ten play with three games to go.

Ultimately, IU finished with a 6-2 conference record, which was the same as Iowa, as Michigan State went 7-0-1 to win the Big Ten.

What is at stake: A potential 1.5-game lead over Ohio State with three regular-season games remaining; tying the program record for the highest-ranked opponent ever beaten (No. 3 Purdue in 1967)

Ohio State is the opponent that currently holds the longest winning streak against IU with 25 wins in a row and 27 straight games without a loss (due to a tie in 1990), as the Hoosiers haven’t beaten the Buckeyes since 1988. So it doesn’t need to be stated that beating Ohio State in any year is a big deal.

But the timing of this year’s game is what could arguably make it the second or third-biggest game in program history.

As previously stated, IU has already beaten Penn State, Michigan and Michigan State, which typically enter every August as contenders for the Big Ten East, or at the very least, really tough outs for the teams that are contenders. A win over Ohio State would give IU a 5-0 record in conference play, while the Buckeyes would be 3-1, with IU’s remaining schedule consisting of Maryland, at Wisconsin and Purdue, before the Big Ten’s championship week.

Even if IU, say, beat Ohio State and Maryland but then lost at Wisconsin, the Hoosiers would still hold a head-to-head advantage over the Buckeyes, putting IU in the driver’s seat in the Big Ten East if it could at least win two of its final three regular-season games.

Many IU football fans hoped that 2020 would be the year when IU could be Penn State or Michigan at home. Well, the Hoosiers went out and won both games, along with victories over Rutgers and Michigan State.

That’s what allows Week 12 of this season to be a monumental blip, if not an earthquake, on the timeline of IU football’s 122-year history. A win would remove yet another potential Aflac trivia question related to IU football, and give the Hoosiers a legitimate chance to play for the Big Ten Championship, which comes with playoff hopes, too.

Yes, it’s mid-November and we can at least bring up the playoff for IU football.

What was at stake: First place in the Big Ten with one game left in the regular season; a potential Rose Bowl berth

In that magical 1987 season, IU beat Ohio State and Michigan, and when you do that – almost regardless of the year – you give yourself a shot to play in the Rose Bowl. The Hoosiers started 7-2, but only one of the two losses was in the Big Ten, as they dropped a road game at Iowa.

Two weeks later, IU visited No. 13 Michigan State with the Spartans leading the Hoosiers by just half a game in the Big Ten standings. The winner would be in the driver’s seat to win the conference and to earn a pot in the Rose Bowl.

Michigan State, which had started its season with a ridiculous schedule of No. 19 USC, at No. 9 Notre Dame, No. 6 Florida State, at No. 17 Iowa, No. 12 Michigan, prevailed 27-3, ultimately winning the Big Ten with a 7-0-1 record and a 9-2-1 record overall. IU tied for second along with Iowa, which had beaten the Hoosiers but already had two conference losses when IU and Michigan State met in East Lansing.

What was at stake: A conference championship; an unbeaten season; a potential Homefield shirt that would do NUMBERS three-quarters of a century later

Is this blog post about to award an 75-years-retroactive national championship to Indiana?

You’re damn right it is.

In late November 1945, IU entered the Old Oaken Bucket game against No. 18 Purdue with a conference championship and an unbeaten season on the line. The Hoosiers were 8-0-1 with their tie coming in a 7-7 game against Northwestern in September.

The Boilermakers were all that stood between IU and its first and only unbeaten season in program history. IU also had to beat Purdue to win the Western Conference because Michigan had just one loss in conference play (coming against IU), and a loss would give the conference title to the Wolverines by a half a game.

Because the Western Conference abstained from bowl games, not a single team from the conference played in a bowl, so an IU team that allowed less than six points per game, while averaging nearly 30, never had the chance to prove itself on a national stage in a marquee bowl game.

What was at stake: IU’s first bowl win; a win in the Rose Bowl; a case for a national championship, potentially

The saying “The Rose Bowl runs through Bloomington” has been hot in the streets for about half a decade now, maybe longer. It is most typically uttered between the hours of 12:01 p.m. ET and 6:30 p.m. ET on Saturdays in August or September, after somewhere between three and seven light beers, and any number of natural or foreign substances.

But there was one time in IU football history when the Rose Bowl did run through Bloomington, and not in the self-indulgent, Keystone Light-fueled sense.

That was in 1968, as the culmination of a 1967-68 season for the Hoosiers that ended with a 9-2 record, a No. 4 ranking in the final AP poll and a berth in the best bowl game in which IU has ever appeared.

IU arrived in Pasadena with a 9-1 record, having beaten rival Purdue, which was ranked No. 3 at the time, 19-14 in the regular-season finale. IU’s only loss of the season came the week before that in a 33-7 defeat at Minnesota.

There was a three-way tie in the Western Conference that season between IU, Minnesota and Purdue, with each school going 1-1 against the other two and finishing 6-2 overall in conference play.

In the Rose Bowl, IU played No. 1 USC, featuring Heisman Trophy runner-up O.J. Simpson. The Trojans had lost just once all season – 3-0 to Oregon State – while beating Texas and Notre Dame, both of whom were ranked No. 5 at the time of the matchup, as well as No. 1 UCLA.

A win against the Trojans not only would’ve given the Hoosiers their first and only Rose Bowl win in program history, but with a win, IU would’ve finished the season 10-1, including wins over the No. 3 and No. 1 teams in the country in its final two games, respectively.

If IU had beaten USC, the national championship claim would’ve come down to IU and Oklahoma, which was ranked No. 3 when it beat No. 2 Tennessee in the Orange Bowl.

To this day, college football is sort of the Wild West, but it was especially lawless and even more of a free-for-all back in the ‘60s, which is why important distinctions such as the national championship came down to the opinions of technology-strapped writers who were scattered across the country.

But in 1968, IU played in one of the two closest things to a modern-day national championship game that existed in that era of college football, making it the biggest game in program history.