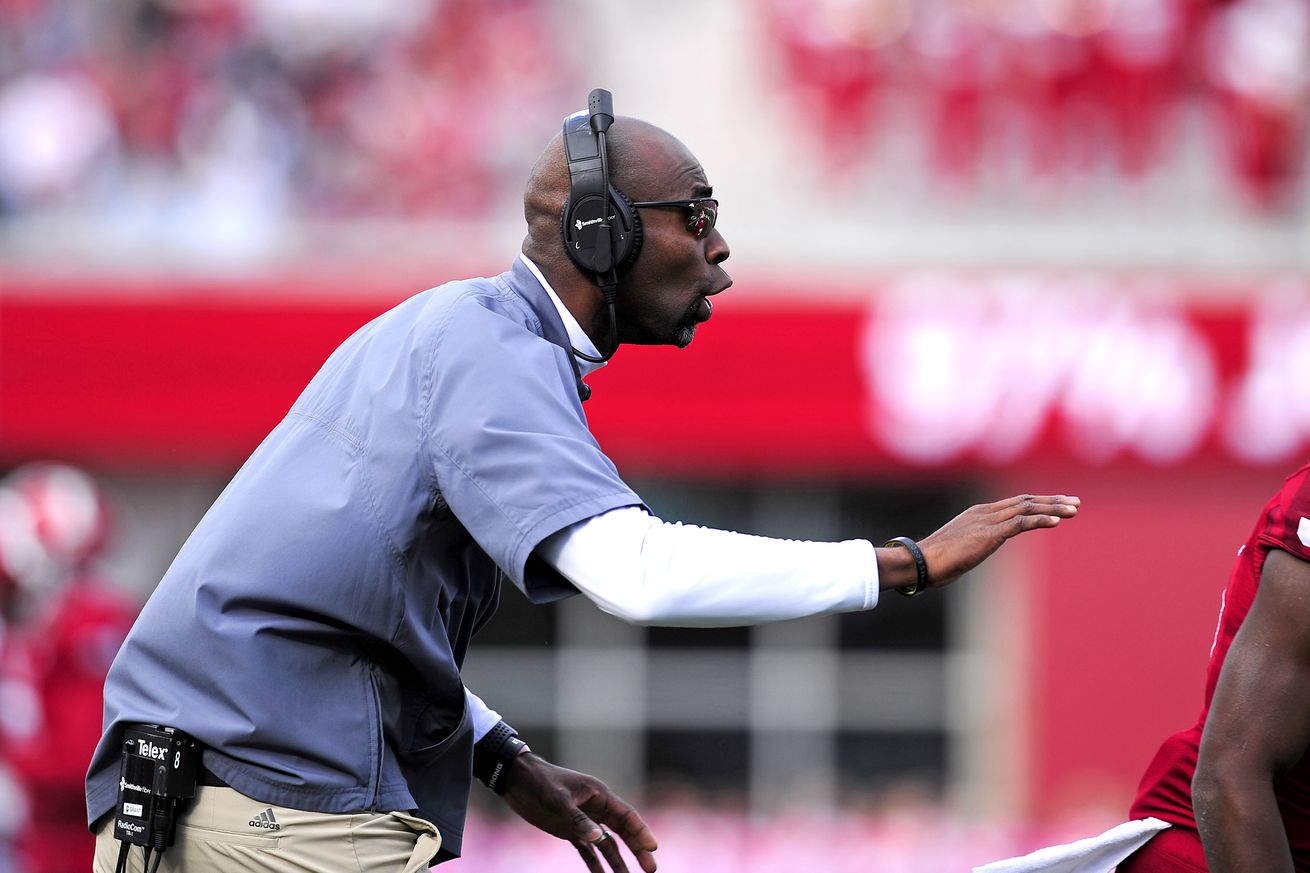 IU receivers coach Grant Heard makes a call during a game against Penn State in Bloomington on Oct. 20, 2018. | Photo by Michael Allio/Icon Sportswire via Getty Images

Freshman has been one of the standout newcomers in fall camp

You know names like Whop Philyor, Ty Fryfogle and Miles Marshall, the players atop Indiana’s depth chart at receiver. But do you know about Javon Swinton, the freshman from Virginia?

Well, you probably should.

Because as fall camp draws to a close, few newcomers this month have had their contributions praised more than Swinton.

“He is going to play,” IU coach Tom Allen said.

Swinton’s work this preseason has earned him that privilege. Week after week, it seems, Swinton’s name has come up in conversation. Which young players are making a good first impression? Which offensive players are making plays? Who looks good? Swinton has been an answer to each question.

The praise can even be traced back to Fall Camp Version 1.0, when Allen mentioned the 6-foot-2, 170-pound Swinton first among all the freshmen who are surfacing early.

“He has come in and picked up the offense,” receivers coach Grant Heard said. “He has his freshman moments where it starts to pile up on him quickly, but for the most part, he knows what to do.”

Indeed, the early returns are encouraging for a player who arrived on campus this summer with the “athlete” designation. When Swinton signed with IU in December, Allen and his staff weren’t sure where he would end up. Swinton played both corner and receiver in high school, and the former was a possibility for him in Bloomington.

It was Swinton’s request to at least start at receiver and then evaluate where things stood. So far, it seems the role suits him well.

“He showed so much maturity through (the summer),” Allen said. “He’s always doing everything he is supposed to do, learning the playbook, which is big. That is a hard thing for guys, especially offensively at that position. There is a lot going on, you are trying to find the signal, you are trying to find this, get the call, learn where you are supposed to line up. Every call has adjustments to it based on splits and the route you are running. There are a lot of things you have to process quickly, so he has been able to do that.

“Obviously, at the end of the day he is making plays. He is very talented in the ball skill area. He is able to make difficult catches at times and consistent catches. Sometimes guys can make those tough catches and they drop the ones that are right there, but he has been very consistent in all those areas. His mindset and preparation, as he has tried to do everything right off the field, has led to him knowing what to do on the field. When he has had those opportunities, he continues to come up against guys we are trying to get ready to play, ones and twos, defensively, and he is making plays on the ball.”

For the most part, Swinton has been running with the second-team offense this month. Because he has well-rounded experience on both sides of the ball, IU has been inserting him on some of its special teams units, too.

The objective right now, Allen says, is to simply find a way to get him on the field.

After all, Swinton his earning his way out there.

“He has the ability to make plays,” Heard said. “It is not always pretty, but he finds a way to get to the ball and he has really good hands. We are trying to get him to understand the pace of the game, how physical the Big Ten can be, and as he progresses, I think that he is going to be really, really good.”