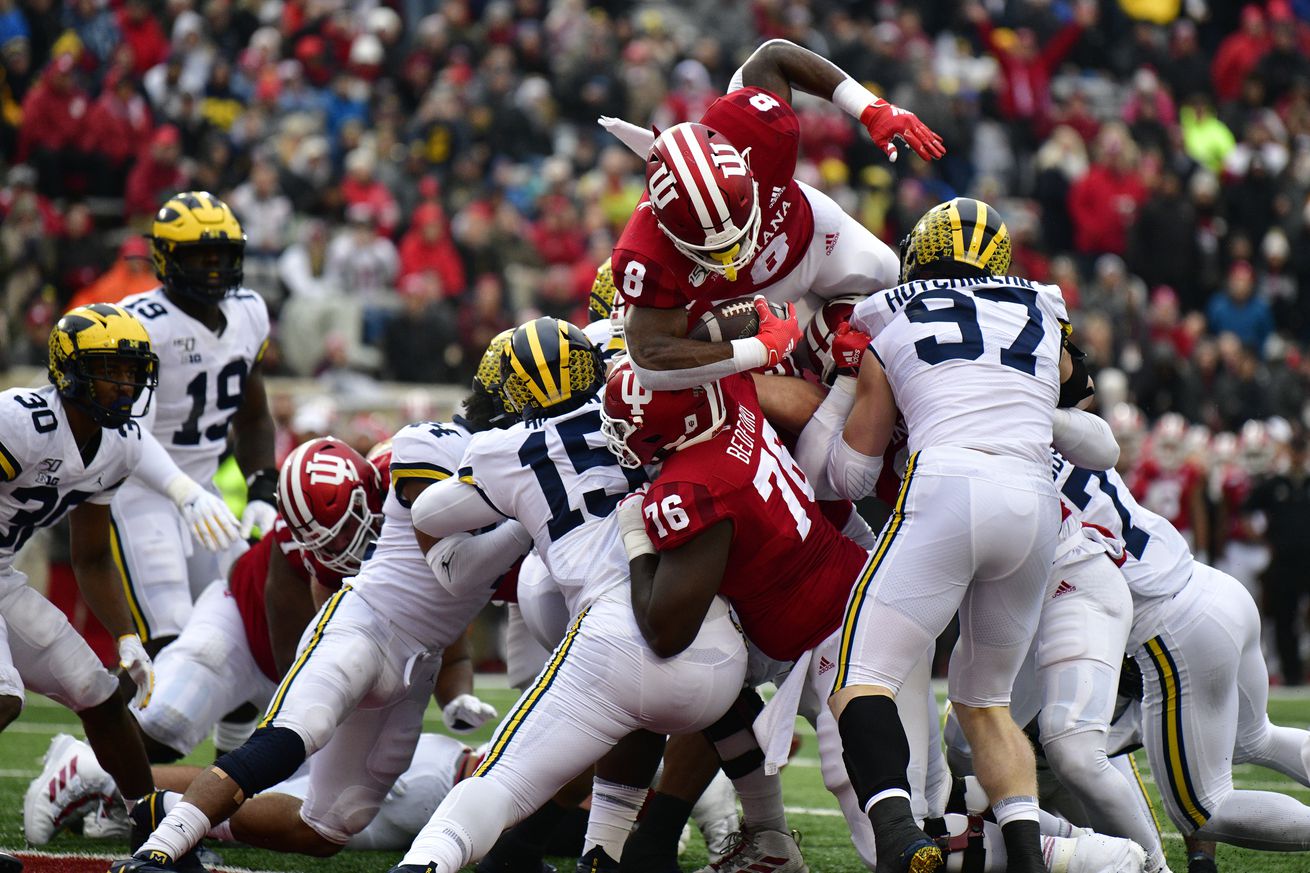 Indiana Hoosiers running back Stevie Scott III (8) jumps over the entire defensive line to score a touchdown during the first quarter of the game against the Michigan Wolverines at Memorial Stadium on Nov. 23, 2019. | Marc Lebryk-USA TODAY Sports

This blog operator has been predicting an IU win over Michigan every season since 2014. Is this the year he finally looks like a genius?

Indiana has already ended one 33-year-old skid this season.

On Saturday, can it erase another?

That 1987 IU football season keeps coming up around here. After all, until two weeks ago, it was the last time the Hoosiers had upset a top-10 team. The ‘87 campaign was also the last one that saw IU topple Michigan. Tom Allen has already spoken at length this week about ignoring IU’s ugly, unfortunate history in the series with the No. 23 Wolverines, and it’s obviously the top storyline in a game where the No. 13 Hoosiers are the higher ranked team.

Here are three other thoughts heading into Saturday afternoon’s kickoff:

Man, oh man, oh man. There’s been a lot of hand wringing this week in Ann Arbor — and rightfully so. Last week’s stunning loss to Michigan State saw an embarrassing performance from Don Brown’s group, a systematic failure that seemed to turn up the heat on the seats inside the Michigan coaching offices. Beyond Brown, the brunt of the criticism has focused on a secondary that was carved up by … ummm … * checks notes* … Rocky Lombardi to the tune of 323 yards. It was true freshman receiver Ricky White who supplied the bulk of those yards on the receiving end. Youth has burned Michigan in more ways than one, with the Wolverines adjusting to a brand new set of corners in their own defensive backfield. So it sure feels like a week to test Michigan deep and hurl the ball downfield. We know Michael Penix has the arm to do it, but will he have the time? Indiana’s offensive line will be tested, particularly on the interior, against Michigan’s defensive pressure.

The Hoosiers feel good about what they’ve seen out of their defense through two games. For good reason. After buoying the team in the season-opening win over Penn State, the IU defense held Rutgers to 247 total yards and 3.6 yards per play last week. That group has certainly been a point of pride for Tom Allen and Kane Wommack thus far. Perhaps most encouraging, the Indiana defense has been flying around, making plays. The Hoosiers have been aggressive with diverse blitz calls and they are seizing the ball when opportunities surface. IU has produced six takeaways on the year, and the defense ranks first in the league in takeaway margin (plus-four), second in interceptions (five) and third in total takeaways.

We noted a few weeks ago that Indiana’s camouflage “Salute to Service” alternate uniforms were objectively terrible. Just the worst! So it was heartening to see the Friday afternoon news dump from the athletic department stating that the Hoosiers, in fact, will not be wearing those unis when they take the field against Michigan. In a statement, IU announced that after consulting with the conference, the lack of contrast between its alternates and Michigan’s road whites made the plan a no-go. You hate to see it.

Game Info / How to Watch