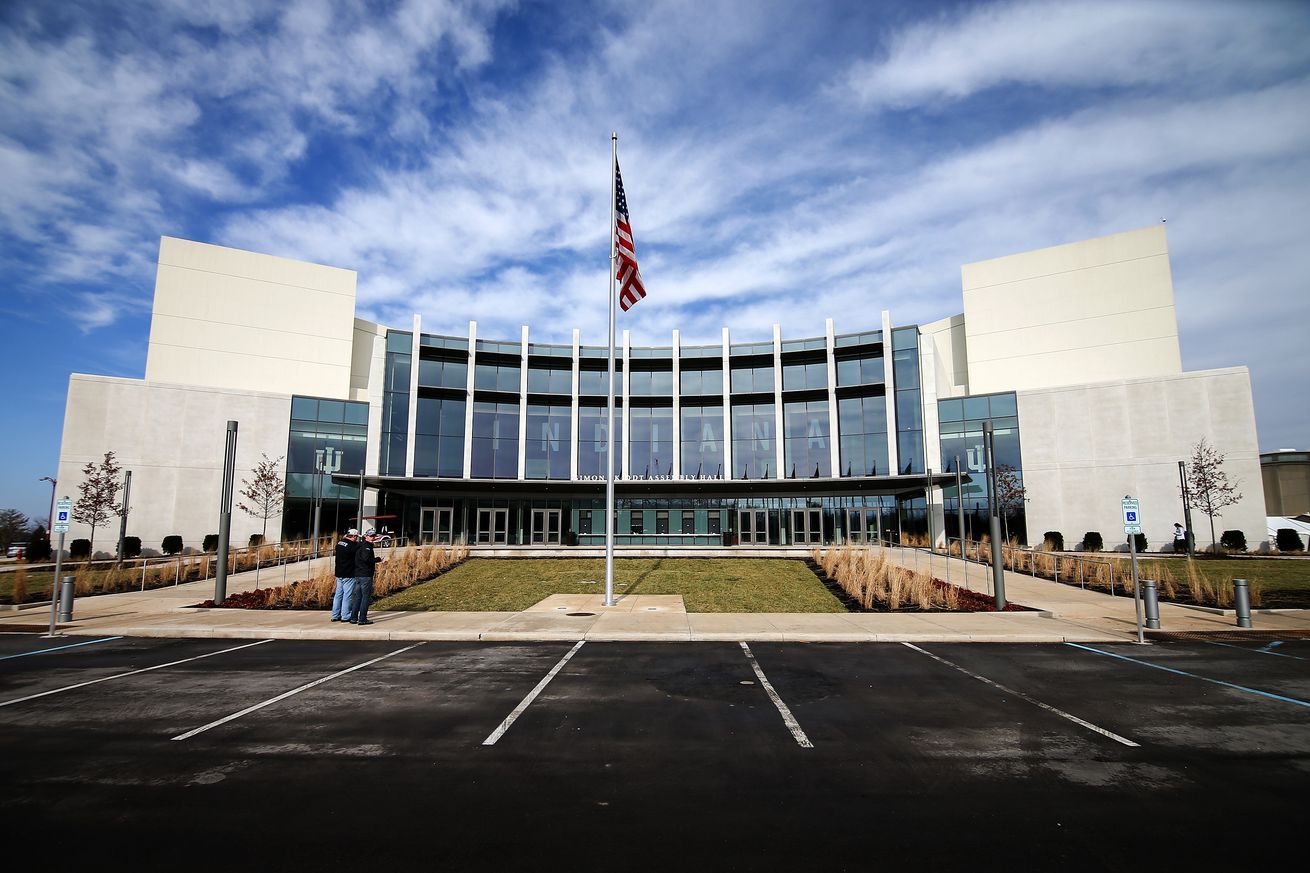 Other new initiatives include making Election Day a mandatory off-day, racial inclusivity training and more, per email obtained by CQ

One of the first tasks for newly-appointed Indiana University Athletic Director Scott Dolson is something that can’t be measured in terms of wins and losses, but is far more important.

On a campus with a student body that was made up of just 4.4 percent Black students last fall, this mission is especially important. Crimson Quarry obtained via public records request a joint email sent by former IU AD Fred Glass and Dolson to “all staff and students” on June 8, with a subject line of “Ongoing Efforts to Fight Racism and Promote Racial Justice and Equality.”

“As our statement last week said, while almost any action seems insufficient given the overwhelming challenge that racism poses to all of us, that can’t deter us into inaction,” wrote Glass and Dolson. “We need to be the change we want to see in the world. This first round of action items is a good start, but it’s just a start. We will stay committed, engaged, and active in fighting racism and securing racial justice and equality.”

The department held Zoom calls in the first week of June “to hear from you through the Athletic Director’s Council on Diversity and Inclusivity.” Glass and Dolson noted the large number of participants in the meetings in their email.

The email sent by IU’s outgoing and inbound ADs outlined six action items that will take effect in the 2020-21 school year:

1. “Annual mandatory, in-person racial inclusivity training for all of our staff and students. This was a specific suggestion expressed by students during our meeting. The need for it was also underscored by concerns expressed by staff members about being subjected to subtle, indirect and/or unintentional racially discriminatory words or actions. We expect that this training will, among other things, lead to better understanding of how various words and actions are perceived, provide tools for improved communication on issues relating to race (especially how to effectively raise such issues, listen, and show support), and teach approaches to effectively prevent and address both overt and unintentional racist words and actions. Just as our mandatory, in-person, annual sexual assault prevention training reflects an effective commitment to battle that scourge, so will this training in combatting racism.”

The line that stuck out here was “The need for it was also underscored by concerns expressed by staff members about being subjected to subtle, indirect and/or unintentional racially discriminatory words or actions.” We’ve seen serious cultural allegations in the Big Ten made against the University of Iowa’s football program, which showed in a report issued by Iowa’s Diversity Task Force that “African American student-athletes do not feel comfortable being their authentic selves.”

That bold was added in the report by the Diversity Task Force, by the way.

This Diversity Task Force was formed two years before recent allegations made against the program, which prompted Iowa AD Gary Barta to say at a press conference, “Frankly, the past few weeks have been a wakeup call for me, I know [for] Kirk (Ferentz).”

It’s hard to have a “wakeup call” a year and a half after you’ve been presented with a report that details alleged racial disparities.

Then, in a tweet sent in early July, former Penn State men’s basketball player Rasir Bolton, who transferred to Iowa State, alleged that Penn State coach Pat Chambers referenced a noose around Bolton’s neck in a conversation with Bolton.

Hopefully inclusivity training, which, once again, was specifically suggested by IU athletes and the need reinforced by IU staff members, will prevent any similar situations to those at Iowa and Penn State from happening in Bloomington.

2. “Major new Excellence Academy program on civics, citizenship, and voter education for students. Students have expressed a strong desire to have their voices heard through the electoral process, but some also expressed the concern whether they were personally informed enough to vote for the candidates most likely to represent their views. This training and education program will be comprehensive, voluntary, and non-partisan. It will ensure that students understand the fundamental legislative, executive, and judicial operations of government; how to get information on and evaluate officeholders and candidates; and logistically to register to vote and vote. We will also collaborate with the Big Ten’s Voter Registration Initiative which seeks to educate, empower, and excite student-athletes regarding the power of political and civic engagement.”

While learning more about the life and activism of former U.S. Senator John Lewis, who recently passed away at the age of 80, I learned that he was just 23 when he spoke at the March on Washington. There’s probably a few current IU athletes who are 23 years old or will be soon, which means not only are they old enough to vote, but they’re likely establishing or reaffirming their own political identities and potentially taking leadership roles in their political activism.

Any non-partisan programs designed to inform and empower athletes are good.

3. “Election Day (Tuesday, November 3, 2020) as a mandatory day off for students for all athletically-related activities. Consistent with the above-described student interest in informed voting, we will make Election Day a day off for them from all athletically-related activities to help facilitate them executing that right. Voluntary academic and health services will be available. We will also support calls from the National Association of Basketball Coaches and others to make this mandatory around the country so as to avoid competition scheduling conflicts with the day off.”

We’ve seen this idea take effect in athletic departments and entire conferences across the country, and there should probably be a bigger discussion nationally about why Election Day isn’t a national holiday in order to allow as many Americans as much time as possible to make it to a voting booth.

Athletes shouldn’t be concerned with, or unable to vote because of, 6 a.m. weightlifting or a 4 p.m. practice after class if there’s an important local or national election in which they’d like to vote.

4. “Establish the ‘Indiana University Athletics Anti-Hate and Anti-Racism Coalition.’ With the express support and endorsement of Big Ten Commissioner Kevin Warren, this will be the first institutional entity inspired by the conference’s ‘Big Ten Anti-Hate and Anti-Racism Coalition’ he recently founded. The IU Athletics Coalition will be made up of our students, staff and coaches as well as representatives of faculty, campus administrators, former letter-winners, and others. The Coalition will set its own specific agenda, but it will be generally charged with continuing to foster communication and understanding within IU Athletics on issues related to race and, building upon that, help develop and implement action to make significant progress in combatting hate and racism. The establishment of the Coalition will help address concerns shared by students and staff that we not lose momentum as time moves on in pursuing and securing racial equality and justice.”

CQ clarified with an IU spokesman, and the Indiana University Athletics Anti-Hate and Anti-Racism Coalition is the first entity in the entire conference to be inspired by the Big Ten Anti-Hate and Anti-Racism Coalition. The last sentence of the excerpt above is especially important: “The establishment of the Coalition will help address concerns shared by students and staff that we not lose momentum as time moves on in pursuing and securing racial equality and justice.”

The coalition’s agenda and actions will be worth following.

5. “Maintaining Athletic Director’s Council on Diversity and Inclusivity. Notwithstanding the establishment of the Coalition and the July 1 athletic director change, the Athletic Director’s Council on Diversity and Inclusivity created in 2016 will continue going forward. Students have repeatedly expressed their desire to have such a forum for sharing the unique challenges for, and perspectives of, students directly with the athletic director as well as each other.”

The action verb here is “maintaining,” so there’s not much new to read here. But athletes deserve to have lines of communication directly to the athletic director and it’s good they have one.

6. “Institute staff-wide and student-wide conversations at least once every semester on issues relating to race similar to those conducted last week. Both during and after last week’s conversations, students and staff expressed strong support for such conversations and the desire that they continue on some regular basis.”

I’d be interested to listen to these conversations, especially as the country gets closer to a COVID-19 vaccine and the death of George Floyd moves further in the rearview mirror. As things return to normal — whatever “normal” looks like — how will IU Athletics discuss race and racial injustices nationally and locally? These conversations are especially relevant in the IU community after arrest warrants were recently issued by the Monroe County Prosecuting Attorney Erika Oliphant following the alleged criminal confinement, battery and intimidation of a Black man near Lake Monroe on the 4th of July, and after protestors were struck by a vehicle at a resulting protest?

Due to those events, Bloomington, Indiana, has become a focal point of a larger national discussion, and IU Athletics could play an important role in continuing discussions and actions to fight racism and hatred.