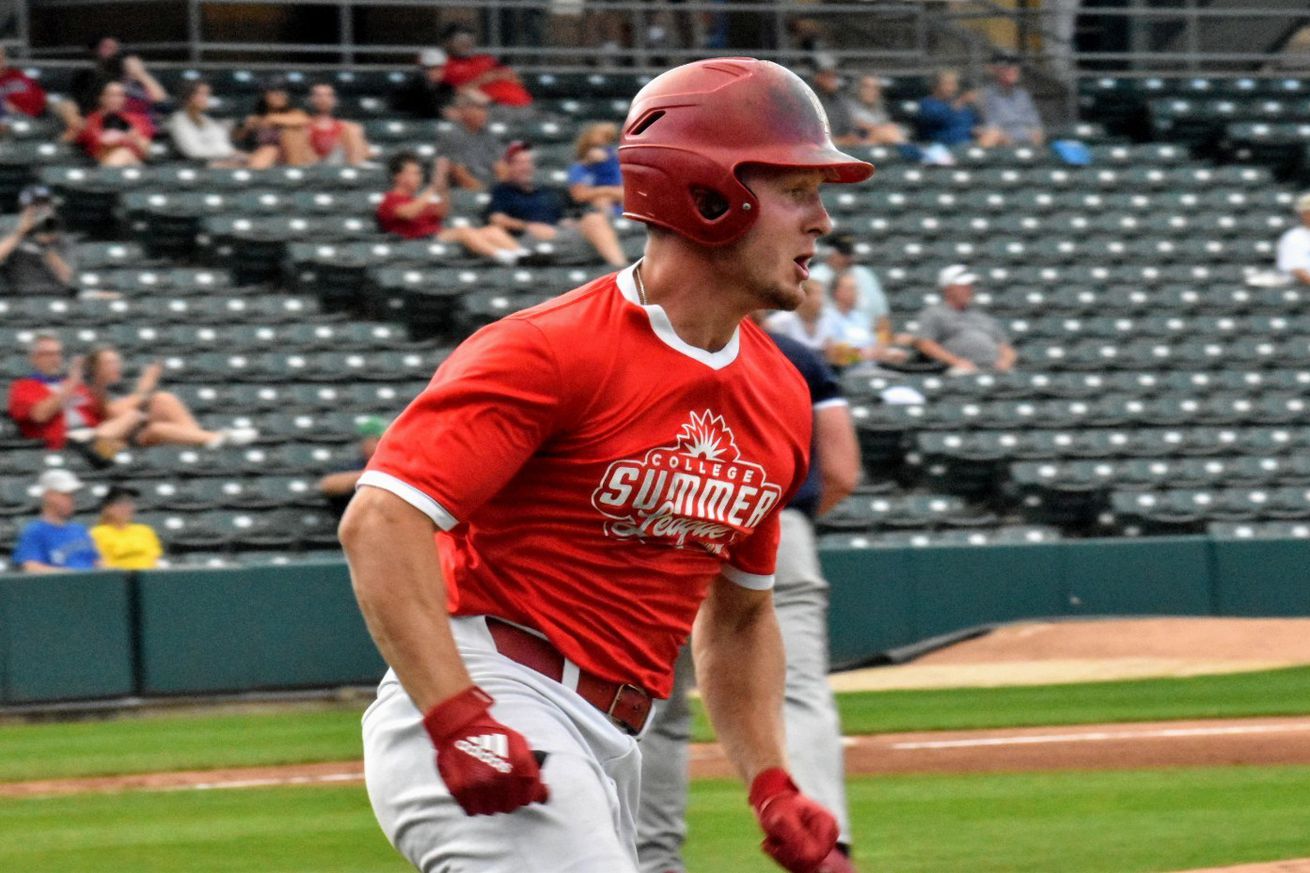 Cole Barr hustles around first base on his way to a 3-run triple during the sixth inning of Thursday night’s College Summer League All-Star Game. | Auston Matricardi

Cole Barr started the evening with two strikeouts. His third at-bat, however, turned out differently.

With his Red team finally starting to get some momentum in the sixth inning, loading the bases after being offensively silent for much of the evening’s College Summer League All-Star Game, Barr stepped to the plate with a chance to give his squad its first lead of the evening.

Barr shot a pitch to the right-center gap and took off out of the box. The Victory Field crowd came alive for really the first time in the evening and by the time a relay throw was made, Barr was sliding into third base and three runs had crossed the plate.

After the two whiffs to start the game, it could’ve been easy for the IU junior to fall into a slump and lose his focus. Instead, he got back in the box and put together what would inevitably prove to be the game-winning at-bat as the Red team picked up the victory 4-2.

#IUBase‘s @colebarrr with a three-run triple in the @GP_SummerLeague All-Star Game to help lead his team to the victory! pic.twitter.com/K8m9bQyaJ7

The approach that Barr took wasn’t a complex one. Heading into the at-bat, he was looking for a fastball over the plate. When he got one, he knew just what to do with it.

“Jared [Poland] throws pretty hard, he’s got a little ride on his fastball,” Barr said. “[I was] just looking for one down, hoping to get one in the zone and put a good swing on it and send it over to right-center.”

Barr wasn’t the only Hoosier who took part in the event. In total, there were 10 IU players named to the league’s all-star game.

Cooper Trinkle was the first Hoosier to get on base as he managed to push a single through the middle of the infield in the fifth inning off of teammate Braydon Tucker. All in all, he went 1-for-4 for the evening, but in the ninth inning he also drew a two-out walk to keep the game alive for the Blue team.

Incoming IU freshman Kip Fougerousse started at third base for the Blue team and made an impact in the field. In the sixth inning, he got IU teammate Reese Sharp out of a jam as the front end of a 5-3 double play. At the dish, he’d end the evening 0-for-4 with a strikeout, but in his final plate appearance he managed to draw an errant throw to first on a ground ball by hustling down the line, helping the Blue team’s second run to score.

The blue team is battling back. They trail 4-2 after Kip Fougerousse hustles down the line to force a bad throw and a run comes around. They’re down to their last 4 outs. pic.twitter.com/dNgr8ioQQI

Drew Ashley started behind the plate for the Blue team; he’s been playing there more this summer than he has in years past. Ashley went 0-for-2 with a pair of strikeouts. Outfielders Grant Richardson and Ethan Vecrumba were both named to the all-star game, but did not participate as they both spent the evening in shorts in the dugout.

There were also four IU pitchers who took the mound throughout the game.

Tucker and Sharp each threw scoreless half-innings in the fifth. Tucker allowed one hit, but faced the minimum three batters thanks to a 5-4-3 double play started by Barr. Sharp walked a pair of batters, but he also notched a strikeout. A double play got him out of the inning with just four batters faced.

Tommy Sommer had perhaps the most impressive performance of the night among the IU hurlers. He needed just four pitches to get a pair of flyouts to left field and a groundout to short.

To round out the evening for IU on the mound, Zach Behrmann also faced three batters. He came on in relief after Barr’s triple to get a pair of strikeouts, as well as a fielder’s choice.

Fans looking to catch a little baseball action will have a handful of opportunities to do so. There will be two more College Summer League games held at Victory Field, the next being between The A-Team and the Snapping Turtles on Thursday, July 23. That matchup will feature six Hoosiers.

The rest of the league’s games will be split between Grand Park and Kokomo Municipal Stadium. You can find the schedule for those games here.