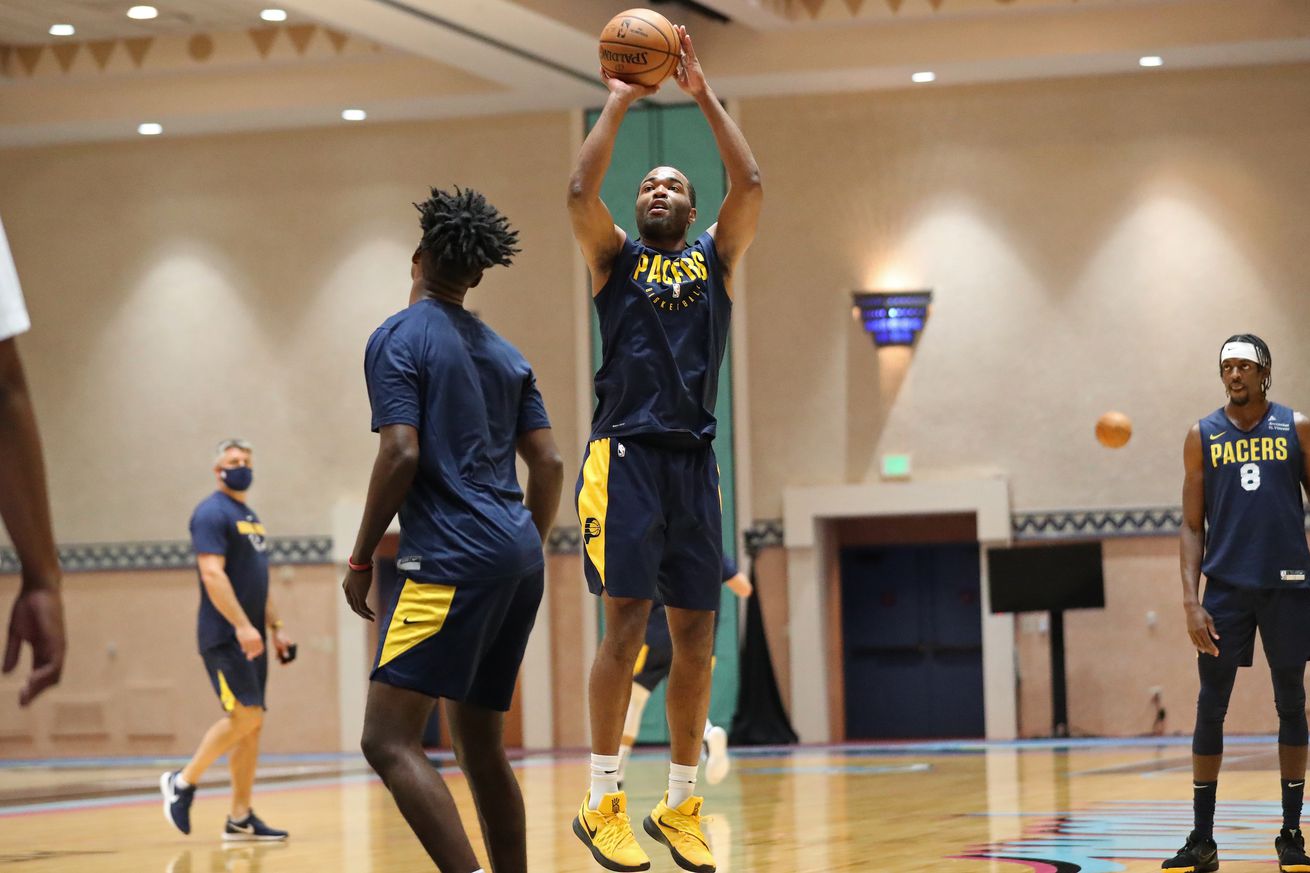 As reported by ESPN’s Adrian Wojnarowski yesterday evening, Domantas Sabonis has left the Orlando bubble to seek treatment for a left foot injury. Woj is back, but this is not how we wanted him to make his re-entry to the Twittersphere. In his report, Wojanarowski say that Domas “hopes to eventually rejoin the team in Orlando, but he could miss the rest of the season.” A return hasn’t been ruled out, however it’s important to keep in mind that he’ll have to quarantine for four days upon (if) re-entering the bubble.

It goes with out saying that this is a huge blow to Indiana’s bubble aspirations and opportunity to gather more data on the Turner/Sabonis pairing in high-level play. While this is unfortunate for the team, our thoughts and well-wishes go out to Sabonis.

As our own Caitlin Cooper hit upon yesterday, this leaves a significant hole in the Pacers frontcourt, rebounding, playmaking, and playoff viability. There are a lot of directions Nate McMillan and co. can go in regards to trying to fill Sabonis’ unfillable void; are there any options that would be more stitches and less band-aid?

The most likely option to replace Sabonis in the starting lineup is the high-energy wing. Sampson already got the nod in the first scrimmage and had his number called all three games that Domas missed during the regular season. He also filled in at the four in the games Myles Turner missed as Sabonis was bumped to the five.

Tony East had a really great piece on Jakarr right before the season ended, check that out here https://www.forbes.com/sites/tonyeast/2020/02/25/jakarr-sampson-brings-fight-indiana-pacers/#391d91db307d

As Caitlin so eloquently put on Twitter, playing Jakarr is sort of like “diet-Thad”(I laughed while a fighting back tears) which isn’t an indictment of either player, more of a reality check.

He’s not the same level of defender and he’s even less capable of spacing the floor in a playoff scenario. Jakarr attempted 13 threes in 23 appearances this season and has shot slightly over 25% from deep on low volume (227 total) since his rookie year.

In the games he started, Jakarr played ~20 minutes, leading to more run from bench players to fill out the rest of Sabonis’ minutes.

While it’s not official, I would bank on Jakarr keeping the starting nod at the four for the rest of the scrimmages and the majority of the seeding games. But, given the nature of the Orlando Bubble and the precarious position the Pacers find themselves in, is this the chance for the team to commit to small-ball with the starters?

Warren at the Four

Moving T.J. to start at the four opens up a host of opportunities for the offense, but also some question marks on defense and the glass.

I recently wrote about T.J.’s improvement on the defensive end, and while I’m still confident in his ability, it’d be difficult for him to match-up with true fours. Ben Simmons is now (finally) playing the four, and has a significant size up on T.J. The size of Milwaukee will be extremely difficult to contend with.

On July 8th, the Pacers play the Lakers. Who guards Anthony Davis? If Myles takes that assignment, who is guarding JaVale McGee? I’m both eager and anxious for that date to see how Nate McMillan tries to work through the size deficiency of the depleted roster.

With all due respect to Myles, who is better suited to play the five, this obviously sucks and should probably make Oladipo’s decision for him.

When Sabonis is off the floor, the Pacers have the equivalent of the league’s worst offense and rebounding rate. https://t.co/bVHltrhBOs

To compound upon this; in 767 total possessions with Warren at the four and Myles at center, the Pacers are a -5.4 net rating per Cleaning the Glass, among the bottom 24% of 5-man lineups league-wide. The offensive rating grades out to about league average (111.1 ORtg) the defense is porous (116.4 DRtg) and opposing teams swallow up offensive rebounds at absurd rates, gathering roughly 29% of all potential defensive rebounds, in the bottom 11th percentile.

It’s important to keep in mind that this is an aggregation of 14 lineups that all played relatively few possessions: so look at it more as well-based trends rather than the gospel. The Pacers very clearly struggle to rebound and to play effective offense without Sabonis, but anything can happen given the circumstances. Maybe a scheme change occurs, or McMillan decides to go small.

SO what’s the positive here? There has to be one right? Funny you should ask, there are some!

If the coaching staff opts to shift T.J. up to the four, I’d bet on Justin Holiday being inserted into the starting lineup. This would likely improve the floor spacing tremendously for Indy. According to B-Ball Index, he currently has an openness rating slightly below average (45%), meaning that his shots from three are contested slightly more than the average player.

T.J. more open from three could mean… more Three.J.’s!!! I’ll walk myself out.

With the current state of the roster and season, now seems like an ample time to shake things up. This team has the personnel to be a lethal outside shooting team on higher volume.

Out of necessity, I think it’s likely we start to see the Pacers gun it from three.