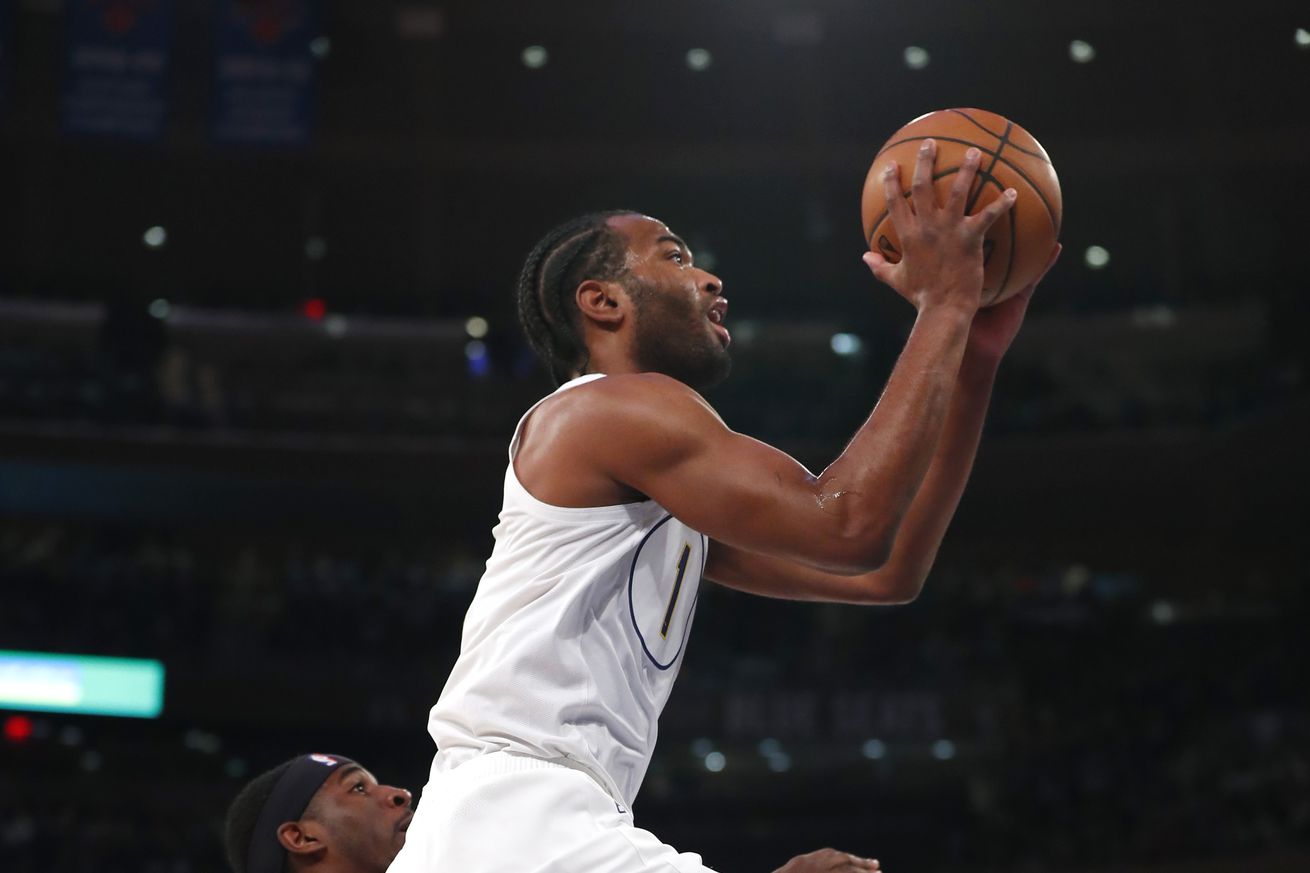 And… why the mid-range specialist could stand to be more specialized from mid-range.

Shaking out the cobwebs with every soft, high-arching teardrop and turnaround, fadeaway jumper, T.J. Warren isn’t just home, home on the mid-range; he regularly takes up residence in mid-range’s ghost town: the baseline — otherwise known as one of the most desolate shot zones in the modern NBA. In fact, according to ESPN’s Kirk Goldsberry, just one of every 43 NBA shots taken through January of this season was attempted as a baseline two. For Warren, who ranks seventh overall in total field goal attempts between 8-16 feet, that figure is closer to the league-wide mark from two decades ago, coming in at roughly one of every 14 shots, compared to one of every eight in 2001-02.

The Game Has Changed: The Death of the Baseline 2.

Over the last 2 decades, no shot has vanished as much as the baseline 2. pic.twitter.com/3KDu5tvhkU

At first blush, as a buttery, throwback scorer who prefers to take what the defense gives him, the fact that Warren is attempting to do damage from an area of the floor that most of the league has abandoned shouldn’t exactly come as much of a surprise. After all, though the 26-year-old forward has barely attempted over 50 percent of his shots this season as threes or at the rim, his ability to shovel pull-up twos into the soft spots of opposing drop coverages nevertheless has the potential to add value in high-leverage moments. In this case, however, when he isn’t driving out of contested corner threes, he isn’t so much keeping the game simple as he is at times making it unnecessarily complicated, either taking lower-percentage shots or leaving points on the table.

On the season, Warren has shot 34 percent on baseline twos — a significant drop-off from his overall conversion rate on field goals attempted in-between the paint and the three-point line (43.5 percent). After reviewing all 63 of those shots, here is what I learned.

Kawhi Leonard may make it look easy, but dribbling hard toward the baseline, stopping on a dime, powering back up and then either fading away or stepping back to clear space is tough stuff — especially without the benefit of the backboard’s forgiveness.

Whenever Warren hoists these atmosphere-piercing moon-balls, you can typically bet on it being a result of the on-ball defender attempting to force him toward the sideline and away from Domantas Sabonis. As strange as it may sound, this is one area where the 26-year-old forward’s ability to make quick decisions without over dribbling actually works against him.

Here, for example, if he had stayed patient and waited just a beat longer for Sabonis to change the angle on the screen, the mid-range specialist could’ve veered laterally in front of Robin Lopez and still snaked his way to his sweet spot at the elbow for a pull-up two.

Instead, because he hastily attempted to challenge Wesley Matthews to a lopsided footrace with help waiting, Warren basically played into the defense’s hand and ended up having to force up a contested shot off one leg while practically falling out of bounds.

So…why do the Pacers run a baseline out of bounds play specifically designed to get Warren these types of shots?

Good question. Setting a dummy pick at the elbow before doubling back off a middle pindown and leaning into a shot from every which way, Warren generally requires a friendly bounce in order to get these acrobatic looks out of the short corner to go down.

Interestingly enough, back during Kawhi’s college days, San Diego State ran a similar set to get their star player open coming off a screen, except with one subtle difference: Rather than looping out and around the elbow, the now reigning Finals MVP, for the most part, would curl tightly around the pick to get a shot nearer to the basket.

Now, take a closer look at this possession against Boston, when Jeremy Lamb entered the ball to Brogdon in the corner. If Warren had taken a more direct path around Sabonis toward the ball, a la Kawhi in the first clip, he could’ve used a quick shot-fake to get to the front of the rim (and possibly the free throw line!) against Daniel Theis instead of catapulting a shot over the top of Jayson Tatum’s outstretched arms.

To that point, there’s no reason for Warren not to be more selective with his court placement.

When the Pacers run floppy for T.J. Warren, Indiana’s bigs generally set their screens closer to the basket than they do for Doug McDermott and Justin Holiday so that the stop-and-pop scorer can run, curl, and attack rather than run, curl, and fire from deep.

Given that the 26-year-old mid-range specialist generally doesn’t shoot from above the break after coming off a screen, this tweak makes sense because it plays to his strengths as a powerful driver. That said, on the occasions when he has to fade in order to get himself open, he could certainly stand to make himself more aware of the three-point line.

In each of these instances, all he has to do is spot-up a few steps further back before he catches the ball. This isn’t asking him to change who he is; it’s opening the door for him to do what he already does while also generating an easier shot that doesn’t require him to put the ball on the floor and immediately rise up for two against a rotating big. Plus, he’s shot above 43 percent on corner threes this season, which means his shots from deep on the baseline are worth roughly 0.61 points more than his twos.

This is true, and when he can get all the way to basket out of either a ghost cut or when the defense pinches in on Sabonis as the roll-man, then there’s obviously reason to excuse him for not staying glued to the three-point line. Why would anyone turn down points that are this free?

All of which is to say that Warren doesn’t need to stop gliding up and down the baseline; he needs to adjust where it is that he stops on the baseline’s sliding scale. There’s a difference between drilling the shots that the defense is designed to give up and working to get open in spots that the defense will most likely still be able to contest. In the latter case, whether manipulating the pick-and-roll to avoid getting pushed to the sideline, fading to three, or simply making a beeline straight to the hoop, Warren has it within his power to make himself a more effective weapon operating out of the area of the floor that most of the league abandoned — so long as he does so while merely passing through rather than putting down roots.