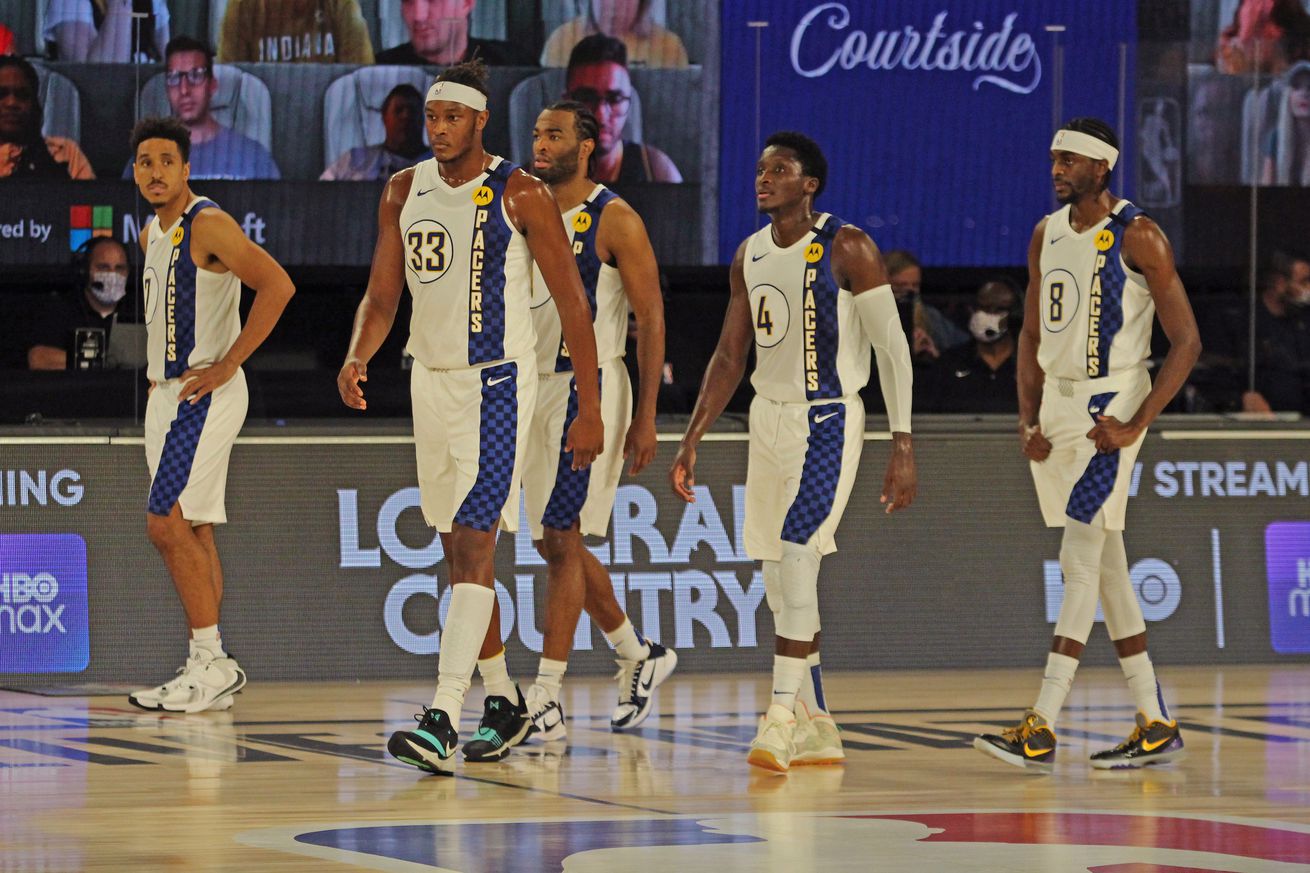 On the multitude of confounding factors that led to T.J. Warren’s explosive start and the team’s disappointing finish.

Before the Pacers got swept from the playoffs for the second time in two seasons, their eight-week stay in Orlando began vastly different than how it concluded. For a six-game stretch, T.J. Warren’s star shined brighter inside the NBA’s campus at Walt Disney World than the nightly pyrotechnic shows that normally would have been taking place across property at the Magic Kingdom. Averaging 31 points on 57 percent shooting while doubling his per game volume of three-point attempts, the 26-year-old, typically mid-range inclined, forward emerged from the league’s shutdown functioning like an unsustainably incandescent mash-up of Paul George mixed with Kawhi Leonard, dashing around off-ball screens with the easy cadence of the former while getting to his spots with all the steely, unbothered resolve of the latter. Taking on increased usage from a still-recovering Victor Oladipo at the same time as power-and-polish big man Domantas Sabonis went down for the season with plantar fasciitis; Warren had his coming out party playing as part of a smaller attack for the Pacers at the four spot – a conundrum for a team with two starting centers.

As was foreseeable, the non-All-Star’s god-like scoring numbers regressed in the playoffs, dipping to 20 points per game against increased defensive attention, but the otherworldly nature of his All-Bubble performance, especially in the wake of yet another first-round exit, still raises an important question for the Pacers headed into the offseason: How much of his play can be attributed to who was, and wasn’t, on the floor with him?

To begin with, given that some of the bubble teams were in a fight for their playoff lives while others were treating the initial seeding slate merely as a tune-up; a certain degree of circumstantial weirdness has to be factored into how Indiana’s breakout performer managed to torch so many opposing defenses. For one thing, with the exception of his relatively mortal outings against Phoenix and Miami, both of whom swarmed him on occasion with multiple defenders, very few adjustments were made. For instance, a tiebreaker was on the line when he went off for 53 points against the Sixers; and yet, with Ben Simmons dying on nearly every screen, Warren scored numerous times out of the same curl play without ever being encircled by extra bodies – let alone confronted at the level of his release.

Likewise, much of the defensive film in Indiana’s win over the top-seeded Lakers was similarly unkind to Anthony Davis, who lightly trotted up the floor in transition as Warren racked up yet another 35-plus point scoring outing.

Admittedly, the intensity from the Lakers shifted during crunch-time, when the 26-year-old forward came up huge, scoring seven points over the final 1:25 of the game, but a thought was never given to actively forcing the ball out of his hands. Nevertheless, the fact that he wasn’t blitzed, and arguably should’ve been, is a testament not only to his incredible shot-making over that stretch, but also his modernized shot-selection.

According to PBP stats, prior to the hiatus, Warren took 20.3 percent of his shots as threes in the 380 minutes he played in spread lineups at the four with Myles Turner. In the bubble? That number ballooned to 33 percent; with the 26-year-old forward not only spotting-up and weaving through screens but also sprinting to the line in transition and pulling up from deep rather than inside the arc.

Playing with the same amount of acreage of space in those pre-shutdown units as he was in Orlando, notice how Warren took all of these shots as twos, even though the big was dropped well below the level of screen.

Now, compare and contrast those to this clutch dagger over Anthony Davis.

That’s not about which center is on the floor; that’s Warren making a concerted effort to expand his game. After all, of the 186 points he scored during the seeding games, over 45 percent came when one of Goga Bitadze, T.J. Leaf, or JaKarr Sampson was manning the middle – the latter two of whom rarely spend time out on the perimeter, let alone command serious attention from deep. Furthermore, even in some of the instances when Warren was arguably most impressive, going 1-on-1 and converting tough shots against stiff defenders, Turner wasn’t spread to the corner; he was planted in the dunker’s spot.

That said, playing with only one big at a time clearly had its benefits. With Oladipo sliding into somewhat of a secondary role, Warren had more opportunities to pilot the pick-and-roll as a small-ball four while also dabbling in the mid-post and attacking out of clear outs – all things which would be more cumbersome, and in some cases impossible, with two centers wrestling each other for elbow room.

Per Synergy, here are some of Warren’s most used actions during the seeding games compared to his season overall. As you can see, not only is the order different. The percentage of how frequently each was used varied quite a bit as well.

Putting opposing stretch-fours in the position to fight over screens isn’t an option when Myles Turner and Domantas Sabonis are playing at the same time and neither is out running-and-gunning bigger power forwards in the open floor. Stepping into threes in transition with a greener-than-usual greenlight, Warren averaged 2.5 shot attempts from deep within the first seven seconds of the shot-clock during the seeding schedule. For the season, Indiana as a team launched fewer than four per game.

Still, a lot of those positive developments eroded during the playoffs. Stymied by switches and congested driving lanes, the Pacers essentially needed Warren, in his first-ever postseason (while dealing with nagging injuries), to make the next evolution of his game at warp speed in order to overcome the fact that he was routinely being treated like a magnet. Without Sabonis available to consistently crunch inside mismatches, Bam Adebayo lurked around every corner, playing goalie at the edge of the lane and suffocating even those match-ups that were fair to be perceived as favorable.

In effect, this type of coverage, along with the obvious downsides of switching Adebayo directly onto the ball, divested the diversity from Warren’s scoring profile and reduced him to playing mainly an off-ball role while being found spottily in rhythm.

Admittedly, Sabonis isn’t about to pull defenders out to the three-point line, but he does actively yank attention away from his teammates with his dual-ability to both score and pass out of the post as well as on the roll. No longer with someone on hand to shift and scan the defense, playing five-out wasn’t enough to dissuade the Heat from loading up on penetration and communicating their unbelief that the Pacers could win on the back of their center shooting jumpers.

Even during the waning moments of Game 3, when but a few minutes earlier Turner had hit a three from this exact spot on the floor, Adebayo wasn’t making a quick jab at the ball: He was completely abandoning the strong-side corner to envelope Brogdon on the drive; while at the same time, Warren was marginalized on the opposite side of the floor.

Much to his credit, aside from some struggles at the free throw line, Turner did what he is capable of doing at a high level, scoring efficiently for the series on low-volume while providing a strong source of anti-gravity around the rim, but he has a tendency to self-check, and Miami was largely content with allowing him to beat them from perimeter. In Game 4, the 24-year-old shot-blocker finally realized he could slip and was aggressive on the offensive glass, but look at how many times Adebayo roamed off of him on this possession in order to track the ball.

Once again, the message sent with this strategy is clear: The Heat were willing to surrender Turner’s individual offense in the name of shutting everything else down because they knew the reward of clamping down on dribble penetration and encouraging more of the same fitful, hold-swing-hold ball movement would be greater than the risk.

From a coaching standpoint, Nate McMillan made a few (very) minor tweaks with weave actions up top as a crowd-control measure; however, without a lubricating roll-threat, it was still mostly too easy for the Heat to shrink the floor on long drives.

That’s why, with his inverse-gravity and skills for facilitating above the paint as both an expert screener and slick passer, Indiana’s less modern starting center shouldn’t be seen as the reason for Warren’s explosive start inside the bubble, but rather as a possible answer for how the Pacers could move forward with less positional overlap, instead enhancing the strengths of their suddenly more modern, and offensively diverse, starting forward, outside the bubble.

After all, while we likely didn’t see a fully healthy Oladipo during the playoffs, the version of him we did see — aside from some encouraging bursts in Game 4 — looked far from ready to round back into form as a primary scoring option. In addition to shooting 7-of-26 in the lone seeding game he played without Malcolm Brogdon and T.J. Warren, his handle crossing from right-to-left was messy throughout and, whether a product of fatigue or lack of confidence in his body, he routinely settled from the perimeter. On this possession, for instance, though he had the whole left side of the floor clear against a favorable match-up in Tyler Herro, he opted to step away into a three instead of knifing to the rim.

For the series, after beginning and ending his strange, rocky stint in Orlando as seemingly a perpetual game-time decision, Oladipo finished with more turnovers than assists and took nearly 60 percent of his shots as threes despite the fact that he shot 31 percent from deep.

Sure, Sabonis isn’t going to fast-track Warren into being a playmaker, or magically restore Oladipo to what he was two years ago, but he is capable of raising all boats and could at least mitigate some of the burden to constantly generate points with detached drive-and-kick. Plus, on the flip side of this, with the way the Pacers already struggled to contain the three-point line through the first three games of the series, how much more of an uphill battle would they have been up against chasing shooters with Turner and Sabonis on the floor at the same time?

Either way, whether the front office makes a bold leap to balance out the roster around a smaller attack with greater offensive dimension and a more perimeter-oriented defensive identity, or ultimately holds tight to the idea that health will be their great equalizer next season, playing hard (which wasn’t always the case in the playoffs — oh, hi, 74-point first half!), can’t continue to be the defining characteristic for a team that currently lacks in cohesive vision even at full strength.

Winning at least 45 games in each of the last two injury-riddled seasons is commendable; however, with Oladipo about to enter a contract year, at what point does just being good stop being good enough?