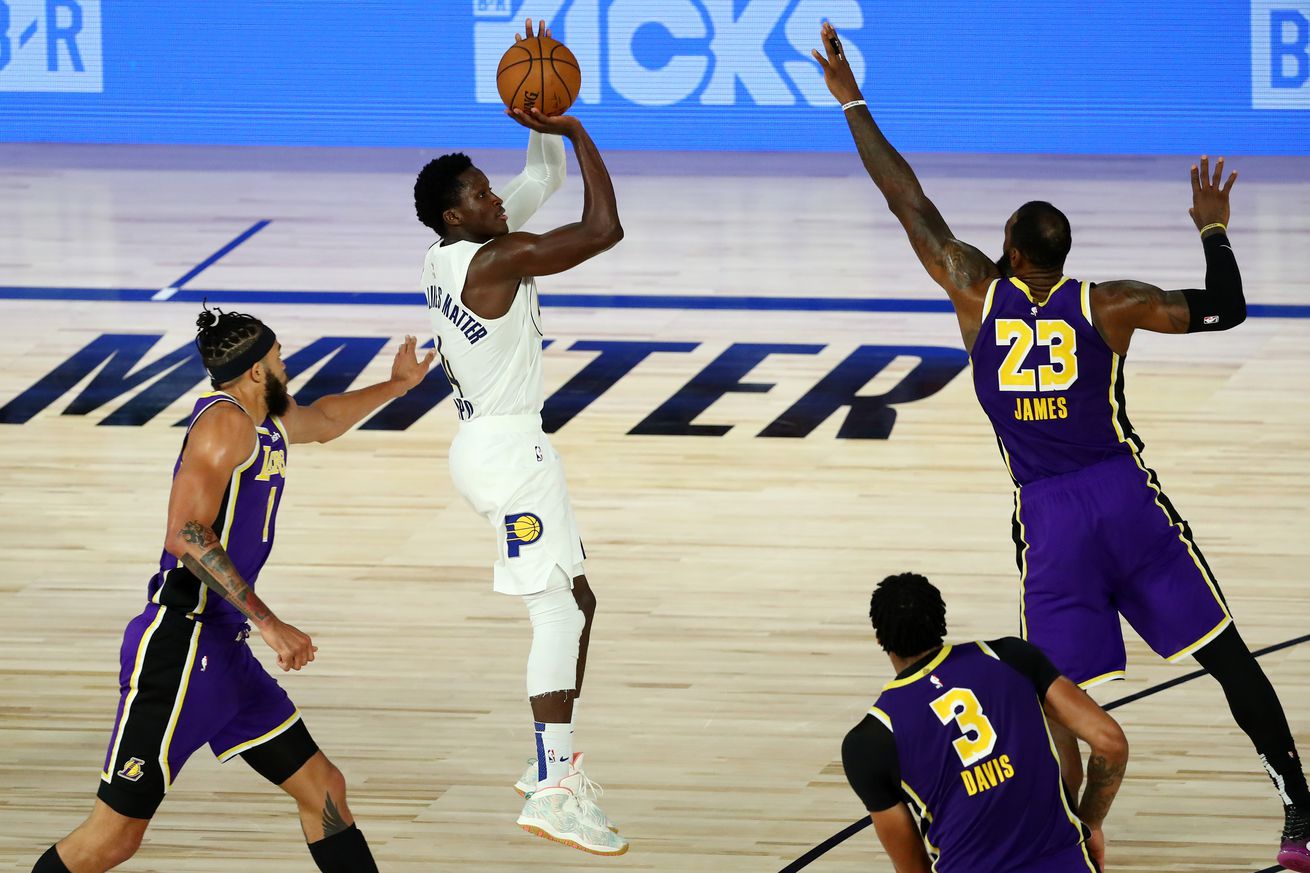 T.J. Warren continues to torch the bubble. While much of his scoring is still coming from the same mid-range mastery we’ve become accustomed to, T.J.’s new found propensity for pull-up threes is what’s feeding the fire.

So normally when looking at a pull-up jumpshot, you think of this.

This is textbook. However, T.J. is taking a shot that’s not technically a pull-up by second spectrum tracking, in which he catches the ball and steps into his shot rather than from a stand still.

These can end up having similar difficulty and motion to a pull-up minus the dribble action. So, I went back through all of T.J.’s three-pointers pre-hiatus and in Orlando to quantify what’s been different.

First of all, that jump is remarkable showcases T.J.’s newfangled solace from beyond the arc. In five games, T.J. launched nearly half as many pull-ups as he did in 61 games prior. That’s a significant shift.

Even more interesting to look at; T.J. has taken a grand total of five corner threes in five bubble games accounting for about 14% of his three-point attempts. He took 90 of his 213 attempts beyond the arc from the corners pre-bubble (44.7% of total attempts).

T.J. is taking more threes, but the shift in where and how he’s been taking them is fascinating. It’ll be interesting to see how this trend continues.

Davis finished 3/14 from the field against the Pacers with four turnovers. In a match-up I was certainly weary of especially with a depleted front-court, the Pacers defensive gameplan came through.

The Pacers doubled AD anytime he got the ball inside 20 feet and forced Davis to settle for long range bombs. This was an uncharacteristic performance from Davis, that’s important to note. But, Indy’s execution was phenomenal.

As highlighted by Caitlin this morning, Aaron Holiday was a menace on the defensive end last night. Justin Holiday, whose shooting woes unfortunately continued, provided some excellent help defense and T.J. Warren fronted AD whenever he found his way into the post.

Jakarr Dunks on Everyone

Jakarr Sampson’s energy is so infectious. I mean come on.

I can’t speak highly enough about how well he’s performed in his role and stepped up for this team. No matter how long he’s on the curt or who his match-up his, he’s going to give you all he’s got as a defender, rebounder, and finisher on the offensive end. He seemingly was the only big who could get a defensive rebound with Dwight Howard on the floor.

Jakarr Sampson is more than deserving of a long-term contract as an energetic rotation player. The Pacers books are fairly locked up this upcoming off-season, so I’m uncertain of the likelihood of a Jakarr return, but

Goga Bitadze finished with 7 points, 2 boards, and two stocks in a little over 12 minutes of play. While he’s certainly had bigger box scores during his rookie year, this may well have been the most impactul NBA game of his young career.

He played some solid defense on Anthony Davis. Yes, I did actually type that, we’re not dreaming.

Oh! And he blocked LeBron James.

Ok, I’m done gushing. It’s a small sample-size, but it’s exciting and it’s been so cool to see Goga’s growth this season. If you’d told me five months ago that Goga would play meaningful minutes against the #1 seed Lakers and play a part in the win, I would’ve been hard pressed to agree.

He flashed real comfort on the court last night, and he stepped into a three! Goga is still a ways away from becoming the player Kevin Pritchard and co. envisioned when drafting him, but he’s showing that he was worth taking a shot on.

Maybe the weirdest/worst/most blah basketball moment came last night early in the fourth quarter in what I will now forever refer to as The Long Possession.

In adopting it’s moniker from the longest Game of Thrones episode in the series, there are many glaring similarities, yet one stark difference; we could actually see what was happening on screen and my god I wish that wasn’t the case.

The Lakers took possession with 9:50 left in the fourth quarter after a Malcolm Brogdon three and the ball would not be back in Indiana’s hands until 9:07 in the fourth. That on it’s own, yeahhh not great.

The possession took 3 minutes 34 and one half seconds of screen time. It resulted in 3 fouls including a technical on Goga, a game delay violation on T.J. McConnell, a loose ball careening off Justin Holiday out of bounds to keep the ball in Laker possession, and two Dwight Howard offensive rebounds.

The possession is long, and full of terrors.