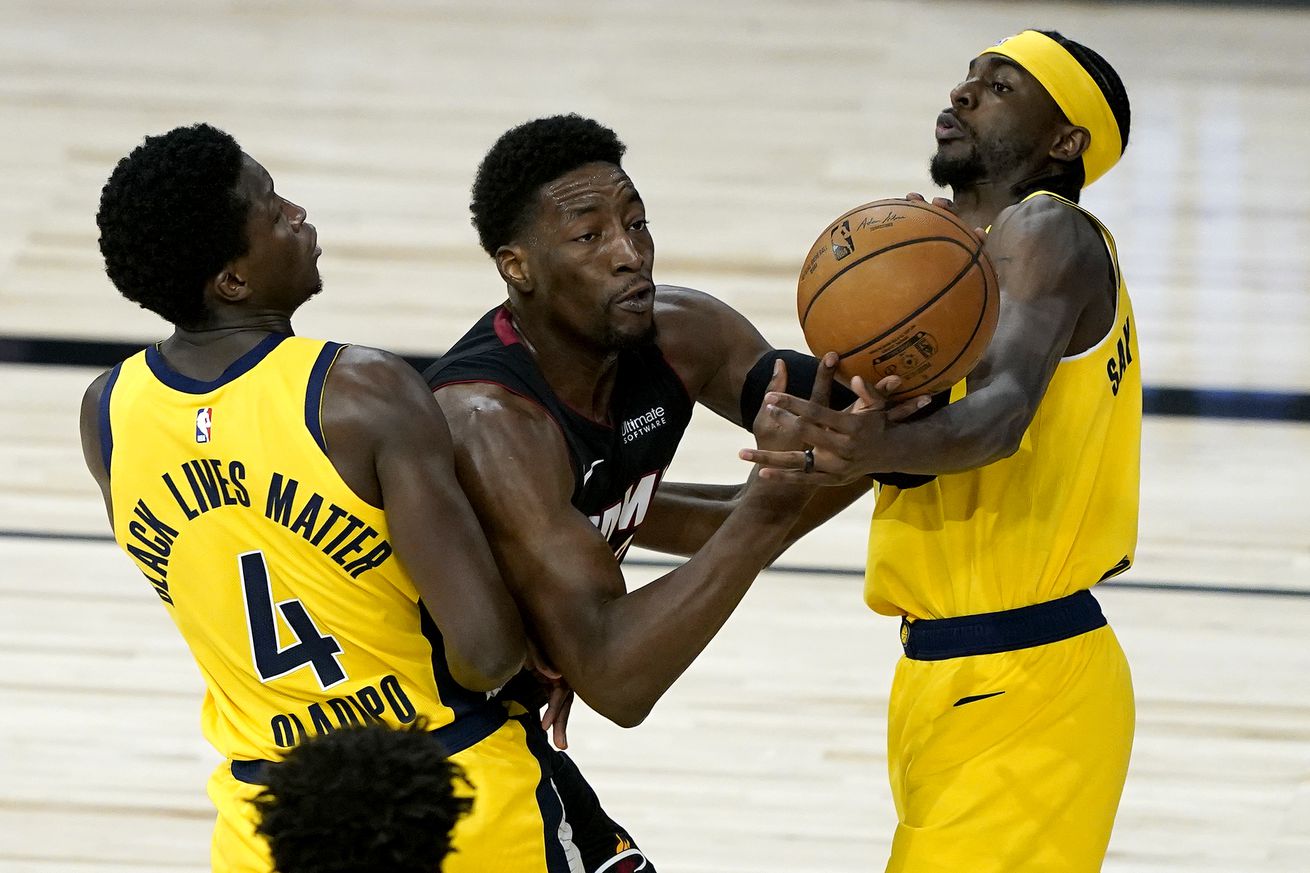 Miami loaded up from three point range, burying Indiana 109-100 in Game 2, putting the Pacers in a difficult 0-2 hole. Victor Oladipo had 22 points.

The Indiana Pacers quickly find themselves in an 0-2 series hole with another disappointing loss to the Miami Heat in Game 2. The Pacers were, in some aspects, better than they were in Game 1, but it didn’t seem to matter much, especially in the second half, as the Heat again put a stamp on the game when it matters most.

Duncan Robinson put the Heat on top with three straight threes barely 70 seconds into game, giving Miami a quick 9-3 lead. Though the Pacers would lead at times, the Heat never really looked back from that start as they just punished Indiana on both sides of the floor. The Pacers would be at their best early in the game, however, when Victor Oladipo and the starting unit led Indiana back, putting them ahead 24-19 late in the first.

The wholesale switch to the second unit at that point didn’t do the Pacers any favors, though Justin Holiday was a fantastic spark in the minutes leading up to it. Indiana went scoreless in the final two minutes of the first, missing their three attempts and turning it over to end the quarter, allowing the Heat to cut the lead to two.

JaKarr Sampson passed on a couple shots in the first, but was more involved offensively to start the second, scoring the first six of the quarter for Indiana to put them up by four. The same adjustment wasn’t granted to Doug McDermott, who continues to be completely erased from the Pacers offense due to Miami’s defensive focus.

The Pacers weren’t able to build on that lead as the Heat tied the game at 30-30. Myles Turner broke the tie with a three, but as was the trend all night, offense came far too easy for the Heat, hitting back-to-back threes to put them up three. The Pacers did a pretty good job keeping pace with Miami for the next few minutes, but that was about the best case scenario, tying the game on another Turner three at 44-44.

Jimmy Butler would ensure that would be the closest the Pacers would get, scoring the next seven, hitting a buzzer beating three and then attacking the basket for two trips to the free throw line. The five point Heat lead at half quickly became nine on back-to-back threes to open the third. When Indiana hit a pair of threes themselves to bring it back to four, five straight points from Goran Dragic and Robinson pushed the lead back to nine.

Stops were again a major second half issue for Indiana, not only allowing the Heat to hit their first eight shots of the third quarter, but failing to record a single stop for the first five minutes of the half, allowing the Heat a 21-13 advantage out of the break. It didn’t get much better for Indiana after that, as the Heat continued to torch them from deep, going into the fourth ahead by 11.

The second unit provided Indiana with much better minutes to start the fourth, cutting into the lead ever so slightly. J. Holiday was fouled on a three point attempt with a chance to cut the lead to seven, but missed two. Butler scored next on a three pointer to effectively put a stamp on Game 2, allowing the Pacers to do no better than simply tread water across the remainder of the game, resulting in a 109-100 loss.

As was the case in Game 1, the Pacers were just run out of the gym in the second half. Dragic scored 16 points in the third and fourth quarters to fuel Miami, a task made easier by how lethal the Heat were from three. For the game, Miami went 18-35 from deep. It was a bit of a shock it was that low of a percentage for they had one locked and loaded any time the Pacers appeared to find a run.

The ease in which Miami could score just goes to highlight how difficult things are for Indiana in the same sense…and the Pacers did hit 12 threes themselves. Turnovers continue to be a struggle for Indiana, tying the Heat with 17 miscues on the night. While they did outscore the Heat 22-17 off those turnovers, they still allowed 17.

Every starter sans Malcolm Brogdon had multiple turnovers. Oladipo racked up a game high six in an effort to attack, getting caught trying to split the defense. He finished with 22 points to lead the Pacers in scoring, but was just 5-14 from the floor. He did get to the line, going 8-8.

Oladipo hit a three halfway through the fourth quarter to bring the game to nine. Desperately needing a stop, Oladipo was spun out of a play by Dragic, who despite missing, was still able to hit a three of his own off of an Andre Iguodala offensive board. One of the most common themes these first two games are things like that: no one is stepping up to be a killer. The Heat, meanwhile, are running a surplus.

The Heat were effective again in minimizing the damage T.J. Warren could do, holding him to 14 points on 7-15 shooting. Warren was effective inside, but could not buy a shot from deep, going 0-5. Turner on the other hand, could. He was a perfect 3-3 from deep, finishing with 17 & 8 with five blocks in a solid bounce-back game from him.

Unfortunately, again, it just wasn’t enough of what Indiana needed. Brogdon again took to attacking Bam Adebayo early, somehow drawing a second foul in the first quarter, but despite having that kind of head start, Indiana was unable to keep him in foul trouble as the game progressed, allowing him to still log 32 minutes.

A. Holiday was quick to pick up two fouls, but he also managed to avoid staying in foul trouble. Unfortunately, his impact wasn’t quite on point. He had 12 points on 5-9 shooting, but was a bit loose with the ball, especially in a second half stretch where an outlet pass to Justin sailed just a bit far and he switched possession again when he tossed the ball aimlessly at the rim in hopes of drawing a foul (and not doing so).

The Pacers have now lost seven straight playoff games, breaking a franchise record of six from 1991-1993. The loss also drops Nate McMillan to 3-14 in the playoffs as head coach of the Pacers, which seems not great, even considering some of the difficulties he’s dealt with in his tenure. Indiana will look to get themselves back in this series when they tip off in Game 3 on Saturday at 3:30 p.m. Eastern.