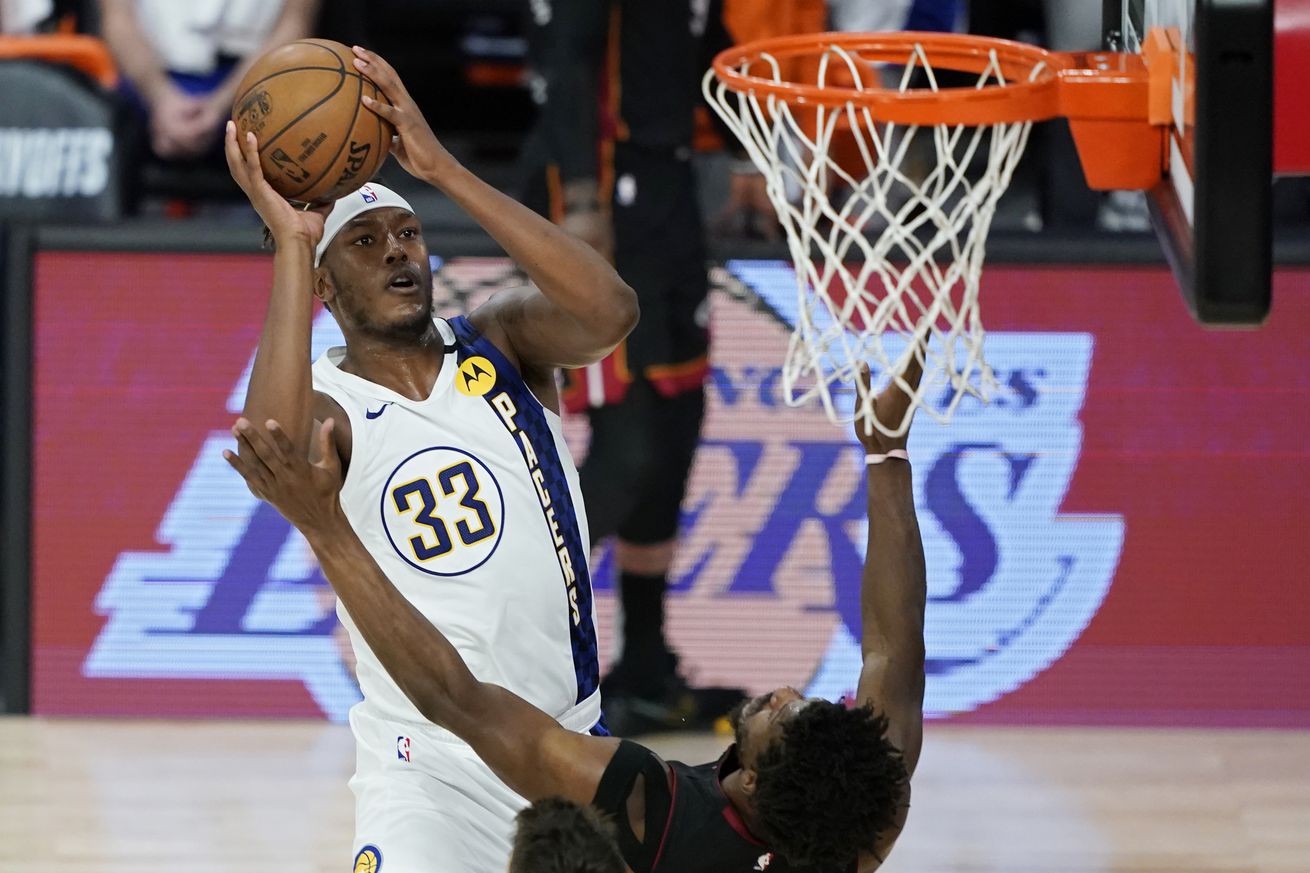 Indiana fell 99-87 to Miami in the deciding Game 4, sending the Pacers into the offseason on a down note.

The now annual Indiana Pacers first round sweep has seen itself to completion, losing Game 4 to the Miami Heat 99-87. That’s now five straight first round exits, with three sweeps in that time frame. As was the trend throughout the series, Indiana was never really able to seize control of any one game, making the outcome of Game 4 less of a surprise than what felt like an inevitability.

The Pacers had an opportunity to seize control in Game 4 though, using a pair of threes to strike first, jumping ahead 8-3. When T.J. Warren failed to convert on a jumper off of a turnover, that allowed Duncan Robinson to respond with a three, immediately turning the game and kickstarting a 9-0 Heat run. That five point swing would keep the Pacers from ever leading by more than five, taking away their best shot at taking the game for themselves even though they did manage to hold onto a 22-21 lead heading into the second quarter.

After going back and forth for the first four minutes, the Heat countered with Kendrick Nunn, getting his first minutes of the entire series. He stepped in, dished two assists and hit a three on an 8-0 Miami run that quickly put them ahead by eight. With the offense of the Pacers struggling, that lead might as well have been 30 as no matter the successes or failures of the Pacers, they couldn’t get it any closer than four the remainder of the game.

That’s not to say Indiana didn’t have chances. Down six late in the third, Warren was able to draw a three shot foul on Tyler Herro, but a quick coach’s challenge favored the Heat when it was ruled Warren kicked his leg out, resulting in an offensive foul. Goran Dragic followed his own miss with a layup to end the quarter, pushing the lead to eight.

In the fourth, Dragic would score with ease, responding to every single Indiana basket by inching the lead back to seven and up to nine after the Pacers miraculously cut it to five. Warren would finally get his foul late in the fourth, completing the second four-point play of the quarter for the Pacers, bringing them to within six at 91-85.

The Pacers finally forced a miss on the other end, but Jimmy Butler, hampered all night with a shoulder injury, followed with a big offensive rebound to retain possession for the Heat. Another miss by Bam Adebayo led to another rebound by Herro. Dragic would miss his shot, but the Pacers would lose track of the ball completely, allowing Herro to again find a rebound, going in for a soul-crushing layup on a 52 second possession.

Dragic would continue to respond to the Pacers late, scoring 13 of his 23 in the fourth quarter to close out the win, and the series, in favor of the Heat as Indiana’s offense sputtered to just 87 points, their fourth worst outing of the season.

A large reason for the low point total was the complete lack of impact from the second unit (in addition to starter Justin Holiday). The bench scored only three points in the game, getting blown out 41-3. The ineffectiveness limited their time on the court, resulting in just 37 logged minutes combined, fewer than any single starter. Even as a starter himself, Holiday was shockingly out of it, providing nothing in the way of his usual spark. He finished with three points on 1-5 shooting.

Indiana did find success in terms of their main adjustments however. They were able to successfully limit Miami from the free throw line and from three point range. The Heat were just 8-30 from deep and 11-14 from the line, giving the Pacers an edge from deep, hitting 14-37.

The side effect of Indiana limiting the three point shot was that it allowed the Heat to increase their success inside. This led to a massive rebounding advantage for the Heat, a 60-34 advantage to be exact, including 17 on the offensive end. Adebayo led the way for the Heat with 19, with Kelly Olynyk pulling in eight himself.

Even though Indiana was able to outscore the Heat from three point range, they couldn’t replicate that success at the free throw line. They were just 7-11 total, perfect outside of a rough night at the line for Myles Turner. Turner was 2-6 at the line, a lone blemish in an otherwise impressive game. He finished with 22 points, 14 rebounds, and five blocks, coming as close to controlling both ends of the court at times as we’ve seen from his this season.

Victor Oladipo led the Pacers with 25 points, hitting five threes. He also led the way with five steals, helping Indiana to a 15-10 advantage in points off turnovers, but so few of those points came easy, scoring nine in the fast break. Oladipo did continue to struggle with ball control, committing four turnovers when trying to do too much with the ball.

Oladipo, as well as Malcolm Brogdon, weren’t as successful at finding the mismatches against Herro and Robinson as they did in Game 3. Dragic was again able to hold up better than expected in those situations, limiting the easy points the Pacers could score. As a team, Indiana had just 30 points in the paint, which at this point is just another area they fell short in with the season on the line.

Warren had 21 points on 8-17 shooting, but was never able to find a real rhythm as the Heat not only made his shooting difficult, but kept him from picking up hustle plays that might spark the Pacers in any way. His two biggest potential swing plays; the three shot foul and a potential steal in the first half were ruled fouls, taking away potentially five easy points the Pacers desperately needed all night.

The end result of this game was yet another season the Pacers were swept out of the playoffs, bringing them to three sweeps in the last four years. They’re all the first three seven game series sweeps Indiana has had in their franchise’s history.

The common thread in this sweep and the year prior is the injuries piling up on the Pacers in the worst ways, with Oladipo missing last year’s playoffs against Boston and Domantas Sabonis (in addition to Jeremy Lamb) missing this year’s sweep against Miami. Last year’s series made a bit more sense. Without Oladipo, the Indiana offense simply didn’t have any real punch outside of Bojan Bogdanovic playing outside of his usual self.

That was directly addressed by this year’s team, however, which takes away some of the excuse making opportunities in this year’s loss. This team was built to be better offensively, but had just 87 points in an elimination game. Even without Sabonis and Lamb, this had no reason to be a sweep. Yet it was a sweep and it wasn’t even a particularly competitive one at that.

At no point in this series did Indiana appear prepared for the fight the Heat were going to bring. Even after they saw it, they weren’t prepared. Miami was never once uncomfortable on either end of the floor. They knew they could score when they needed to and they knew they could get a stop when they needed to. It’s hard to see how Sabonis changes that entirely on his own.

All of this makes Nate McMillan’s extension that much more perplexing. Losing every game by double figures (well, basically) drops him to 3-16 in the playoffs as Pacers coach, having now coached a franchise worst nine straight playoff losses. This team was built to withstand injuries and did for the entirety of the regular season, which is a credit to McMillan, but this was just a miserable and utterly disappointing postseason showing. Whatever decisions are made in the offseason, simply “getting healthy” and running it back can’t be the extent of it. Not after this series. While this series sucked, this team does not. At least not to that level.

From here, the Pacers will leave the bubble and head into a truncated offseason that will carry far more uncertainties than just roster construction. COVID-19 remains a huge threat in the United States, and the league’s plan to hold a 2020-2021 season sometime around December in home arenas, with or without fans, could see similar outbreaks to those in MLB.

Indy Cornrows will be there through the offseason for news on what the 20-21 season will even look like and on behalf of Tom, Caitlin, and Mark, thanks for another season of Pacers basketball! We’ll always have Warren’s 53!