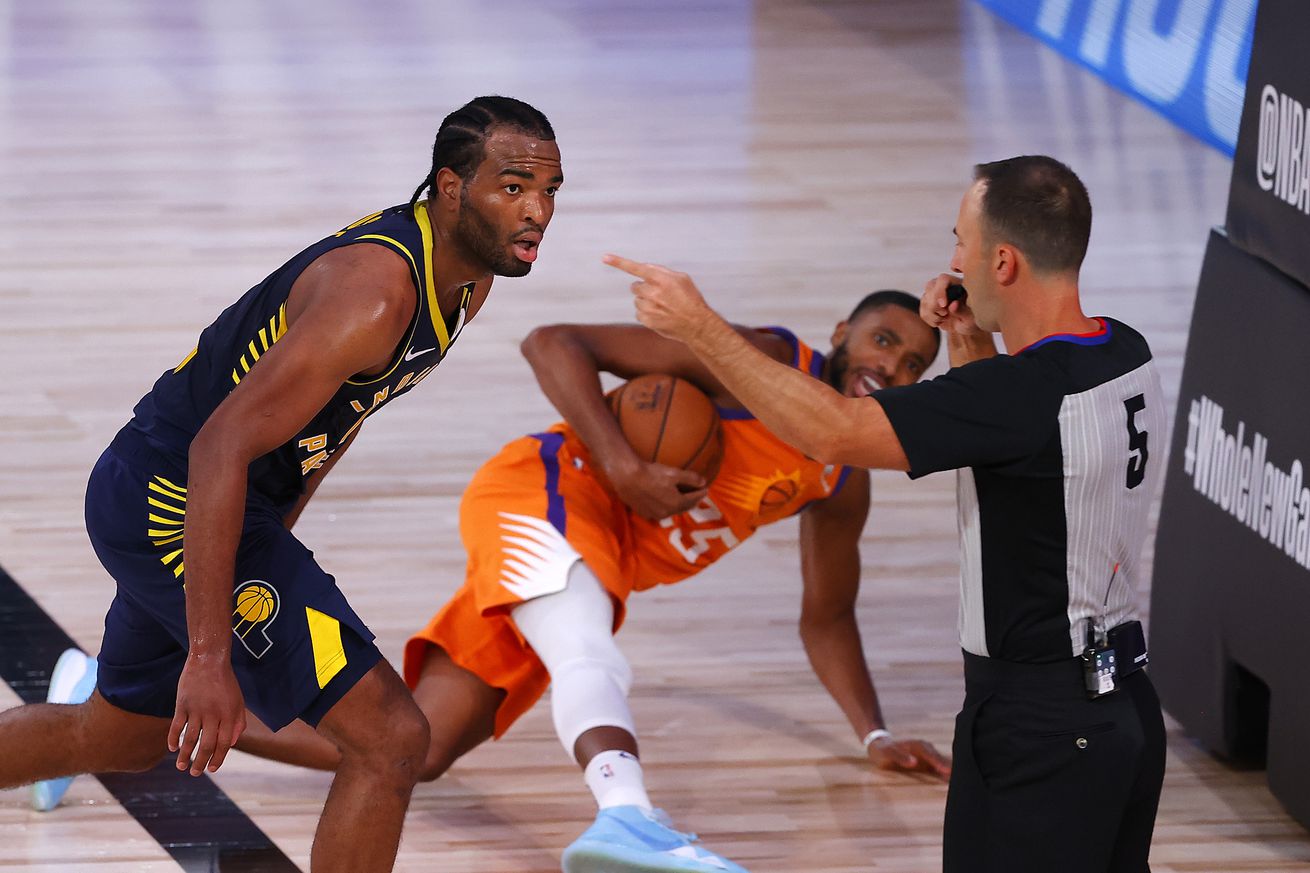 A pair of big Phoenix runs doomed Indiana, handing them their first loss of the bubble. Malcolm Brogdon led the Pacers with 25.

In the battle of bubble unbeatens, the Phoenix Suns got the best of the Indiana Pacers, using a pair of huge runs to keep Indiana at arms length throughout the game. It was a matchup that had some ugly, ugly stretches for the Pacers, unfolding not unlike their win over Orlando, in that they played the role of the Magic while the Suns overwhelmed them.

From the outset, the Pacers simply weren’t sharp enough. Indiana and Phoenix went back and forth for a while, but after going up 9-7, the Pacers immediately surrendered a 15-0 run, putting them down 24-9. Their offense had absolutely no flow during the run. They didn’t get good looks and were one and done on every possession.

That terrible combination wasn’t all that went wrong. After displaying tremendous ball control with a lack of turnovers, the Pacers turned the ball over with abandon in this one, committing six first quarter turnovers as part of 15 for the game, ultimately allowing 18 Phoenix points in the process.

The Pacers, down 15, weren’t completely out of it, however. The second unit brought some much needed life to both sides of the ball, closing the quarter on a 12-2 run that put them within five. T.J. McConnell and Goga Bitadze provided solid minutes and T.J. Warren, who had missed his first four shots, came alive to close the quarter, scoring seven.

The Suns would push their lead back into double figures late in the second, but another strong run from the Pacers late allowed them to pull out the late quarter win, heading into the half on an 8-2 run, down just four. Indiana continued to tread water in the third, taking one step forward and one step back in what felt like perpetuity until Malcolm Brogdon and T.J. McConnell pushed Indiana into the lead and Justin Holiday finally found some life with a three that gave them a 75-72 lead.

From there, it was all Phoenix. The Suns immediately blasted the Pacers for 14 straight points to end the quarter. Cameron Payne and Dario Saric carved up the second unit, carrying it over into the fourth quarter with seven extra points for good measure to go up 93-75 on a devastating 21-0 run.

Indiana’s offense once again fell apart. Forced shots with no hopes of offensive rebounds allowed the Suns to find shots in rhythm, completely eradicating any potential positives from Bitadze and JaKarr Sampson especially. The starters were put back in the game fairly quickly. Aaron Holiday stopped the bleeding with a layup and Victor Oladipo hit a pair of threes to kick off a crucial 11-0 run that put the Pacers back within six.

In need of a stop, the Pacers forced a corner three miss from Mikal Bridges, but the inability to get the rebounds allowed Bridges to follow his own shot for a jumper. Instead of having the ball down six, Brogdon attacked the rim down eight instead. Brogdon had found some success early against DeAndre Ayton with his reverse layup, but this time, Ayton read it perfectly, blocking Brogdon and sending the Suns back down the other way for an Ayton dunk.

While a 10-point deficit halfway through the quarter wasn’t ideal, it wasn’t insurmountable, at least in theory. In practice, however, Indiana’s complete inability to rebound allowed Ayton to pick up a tipped board and find Devin Booker for a dagger three with 5:50 remaining, guaranteeing Indiana’s first bubble loss and allowing the Suns to improve to 4-0 themselves.

The Pacers had done well to minimize the absence of Domantas Sabonis in the first three games, largely doing so by simply getting an elite offensive performance from Warren. That wasn’t the case tonight and Indiana’s offense suffered in a big way. Warren finished with 16 points on 7-20 shooting, forcing shots throughout the night, but also defended far more efficiently than previous opponents.

No doubt this was personal for the Suns, who have heard a number of cash considerations jokes over the course of the restart and credit to them, they showed up in a big way to minimize Warren, and thus, Indiana’s offense. Phoenix did a great job not only covering Warren, but also completely erased his effectiveness in transition, smothering him on every fast break opportunity he had. As such, the Suns were able to remove easy scoring opportunities from Warren and the Pacers, limiting the team to just five fast break points. On the other hand, the Suns had no such issue, scoring 18 themselves.

Brogdon led the way with 25 points for the Pacers, shooting very well at 9-16 and 4-7 from deep. He had six boards and six assists, but did have three turnovers, a common theme of struggle for the starters, all tallying multiple turnovers except for Oladipo. Turner led the way with four, but had some positives of his own with 17 points and three blocks.

Turner, along with Warren, combined for five offensive rebounds. Unfortunately, the Pacers were only able to score four points off of those five boards. They were also unable to get a single offensive board from anyone else on the team. The second unit in particular was a mess on the glass, pulling in just seven rebounds total (five among the regular rotation). Saric alone had eight boards, four offensive.

Oladipo finished with 16 points, coming alive in the fourth to score eight of Indiana’s points in the 11-0 run. It was the only real scoring burst of the night from Oladipo, but he did show more in terms of attacking the basket and getting to the line, going 6-7, and even displaying some signs of burst in attacking Ayton for a reverse layup of his own.

The loss, as frustrating as it is, was minimized thanks to Milwaukee getting a win over Miami, to keep the Pacers a game back for fourth. The schedule really stiffens up from here, however, starting with a matchup against the Los Angeles Lakers on Saturday. The Lakers did clinch the top seed in the West, which could minimize their urgency for the matchup.