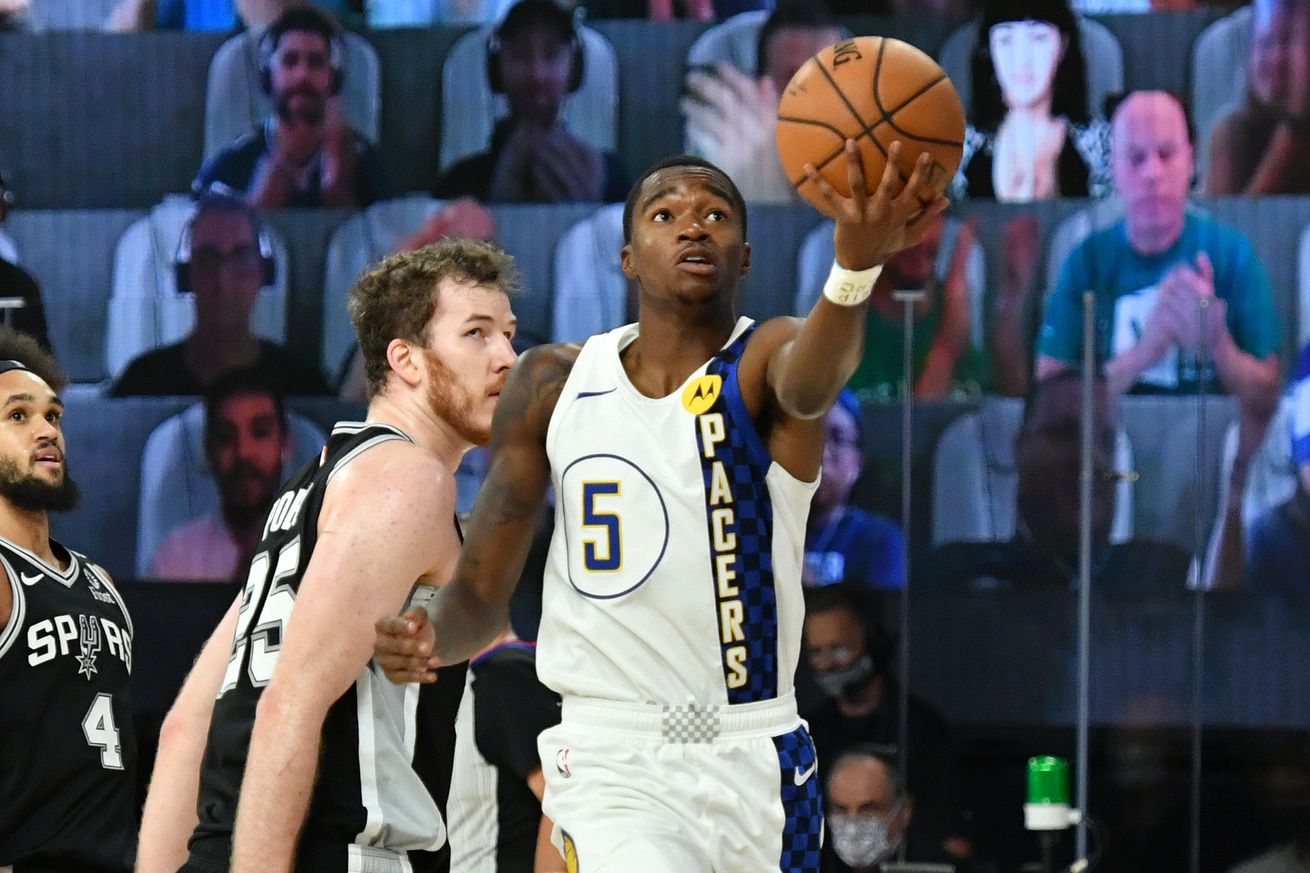 Indiana struggled all night in finding a rhythm, ultimately stumbling just enough to allow San Antonio to win the final scrimmage game. Myles Turner (17 & 10) and T.J. McConnell (14 & 11) each had double doubles in the loss.

The final scrimmage didn’t quite turn out the way the Indiana Pacers had hoped, suffering their lone loss of the exhibition schedule against the San Antonio Spurs. The Pacers reversed course in this one, turning an early lead into a second half deficit, unable to stage a successful comeback late.

In looking to get off to a better start, the Pacers technically did. They didn’t fall behind by double figures right out of the gate, even holding a lead in much of the quarter, but the performance itself wasn’t much better than it had been in the previous outings. It was instead a product of San Antonio’s play than their own.

The Pacers struggled to complete shots around the rim throughout the game, tough finishes weren’t going and San Antonio’s activity on defense seemed to rattle Indiana’s flow. Between it and a healthy dose of whistles, the Pacers had a massively difficult time finding any sort of flow to speak of.

That inability to seize a rhythm caught up to the Pacers in the third quarter, when Rudy Gay and the Spurs took the lead and pushed their advantage to double figures. Positive individual performances didn’t really lift the overall team play, which kept them from getting key stops and ultimately kept them behind late when they were still able to bring it within two possessions.

Poor shooting didn’t help Indiana find any sort of rhythm. Victor Oladipo shot 4-16 for the game while Aaron Holiday was 4-13. Even T.J. Warren was largely kept out of the offense, scoring just five on 2-6 shooting. The Pacers managed to climb above 20 assists with 23, but the entire starting five had fewer assists than T.J. McConnell did on his own (9 to 11), which isn’t great if you’ve got three different players who can initiate the offense.

Myles Turner was active early and often, leading the Pacers with 17 points and 10 rebounds. Turner’s play inside worked in Indiana’s favor, shooting 7-11 overall, but the lack of Domantas Sabonis will force him away from being able to stretch the defense. That along with first half fourl trouble leading to a JaKarr Sampson center sighting could really cause problems against teams with effective bigs.

Turner’s play can’t be discounted, however, especially if Oladipo chooses to opt out from the regular season or on nights like this when he’s simply struggling to find himself offensively. Oladipo did turn things on in the fourth quarter, scoring six straight points towards the middle part of the quarter, attacking the basket twice with success, something the Pacers found little success with throughout the game.

Where Indiana’s starters largely struggled, the bench more than made up for it, getting a trio of double figure scorers to go along with a solid support performance from Justin Holiday, who scored six on a pair of threes with two blocks. Indiana’s issues finding a cohesive rhythm was aided tremendously by T.J. McConnell, who had a big time double double with 14 points and 11 assists.

McConnell created rhythm, especially late in the third quarter, leading the most fluid offensive stretch of the game. McConnell’s favorite target was Doug McDermott, living off a trio of catch and shoot corner threes (and a beautiful cut to the basket) as part of his 13 points. McConnell actually assisted on all seven of Indiana’s bench three pointers, feeding J. Holiday, McDermott, and Edmond Sumner for multiple threes each, helping Sumner to 12 points.

The biggest positive from this one was that it didn’t count. The disjointed nature of the game made it difficult to take in, but it was encouraging to see the positive individual performances were still there. It did feel like a good portion of Indiana’s success was due in part to San Antonio’s shortcomings, which may not be an encouraging sign for games like this when the opponent is vastly superior.

The first of those opponents will await the Pacers in the first game of the regular season restart, facing the Philadelphia 76ers on Saturday. This will be one of the most important games of the restart for Indiana, determining the tiebreaker between the two teams with the Pacers currently holding a 2-1 series edge over Philly.