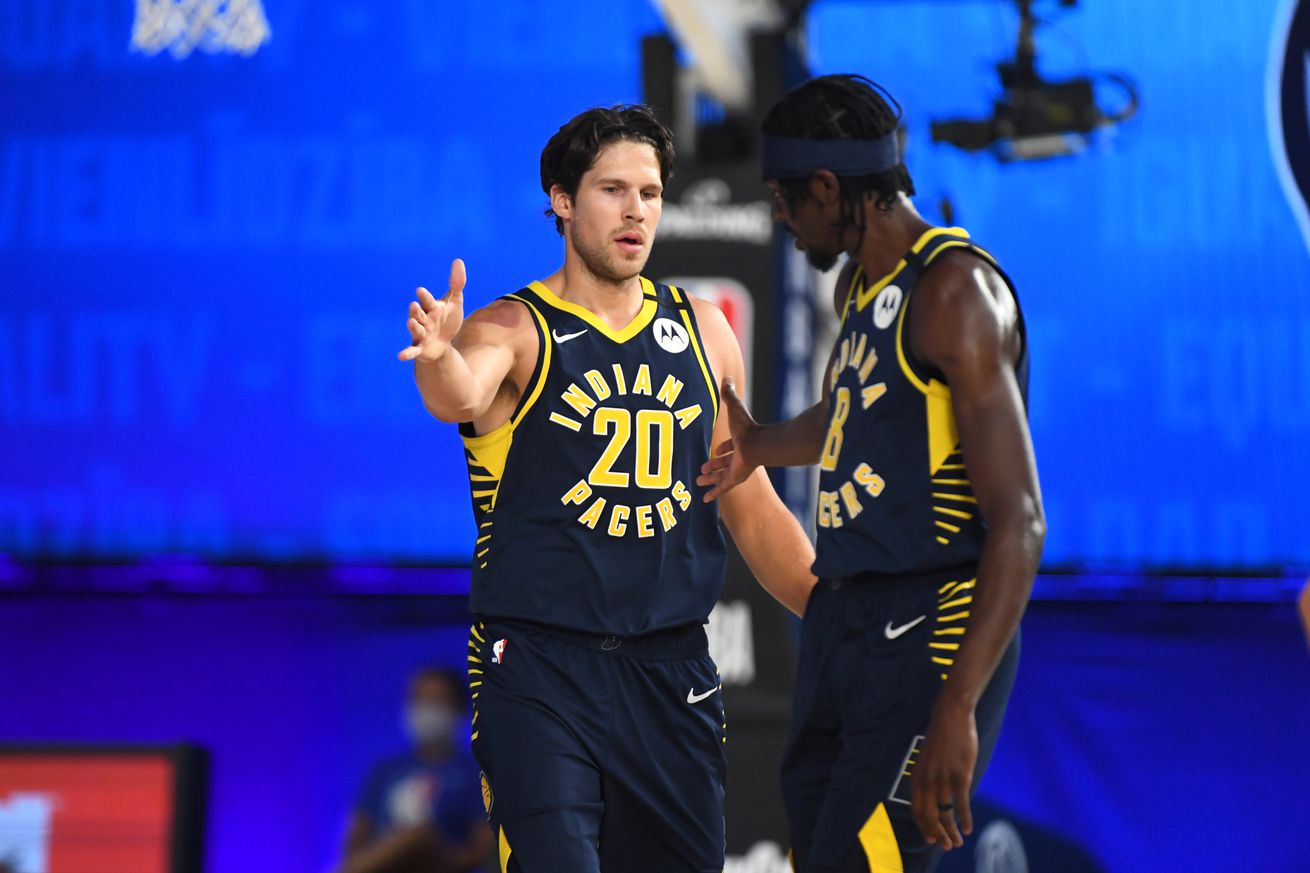 Following the not-so-good news regarding Domantas Sabonis’s foot injury, the Indiana Pacers’ second scrimmage game took on a bit of a different purpose, moving from getting guys in game shape to finding out what rotations are going to work without their All-Star big.

That largely shook out as expected, with Myles Turner returning and starting alongside Malcolm Brogdon, T.J. Warren, Victor Oladipo, and Aaron Holiday. That particular lineup found considerable success in the second half, but was a bit sluggish to start, as the Dallas Mavericks lit up the Pacers from beyond the arc, hitting seven threes in the opening quarter to take a double figure lead.

The game unfolded much in the same way as Thursday’s scrimmage win against Portland, with Indiana slowly climbing back into the game and going up for good in the third quarter. While the starters got them there, the second and third units nearly gave it up when Edmond Sumner stepped in with six big points as the primary ball handler to help close out the win.

After a rocky first half defensively (on both ends), the Pacers managed to step up after the break, allowing only three second half threes to the Mavericks, eventually outscoring them 31-22 in the third quarter. The ability to force stops from three point arc proved useful for Indiana, who shot a lackluster 8-31.

While it was their second game north of 30 three point attempts, the odd statistic of the night was that just four attempts came from Turner, Doug McDermott, and Justin Holiday. Fourteen of those attempts came from Oladipo and Brogdon with Oladipo heating up in a big way, hitting four.

Oladipo in particular was the standout for the Pacers, scoring 16 points with seven rebounds in 28 minutes. He was on point not only shooting the ball, but in other aspects of the game as well, taking a charge in the second half and dishing three assists, including a beautiful wraparound pass to Brogdon for a wide open three.

That was the only three from Brogdon in six attempts, but he did score well, finishing with 17 points and a team high six assists. Much of this game seemed focused on the back and forth between those two and it worked in Indiana’s favor. Four of the five assists the duo had to each other resulted in three pointers, the lone exception resulting in a cutting layup from Brogdon.

Turner’s return was a welcome sight, picking up a pair of blocks in his scrimmage debut. Both blocks came on the same play, leading to a Sumner outlet dunk.

Turner finished the game with 15 points and a team high eight rebounds, shooting 5-8 with his lone attempt from three going in. His offense showed no signs of rust, finding success in the post against the effective Dallas bigs.

Even without Sabonis, the Pacers didn’t show any signs of scoring difficulties, in part thanks to Warren’s seemingly effortless 20-point outing, joining Turner in shooting above 50% at 8-15. With a number of highlights coming around the team tonight, Warren wasn’t flashy, but also showed no real signs of rust heading into the final scrimmage game.

Off the bench, Sumner led the way with 12, getting there thanks to his clutch play late. J.J. Barea came on strong for the Mavericks late, making a layup to cut Indiana’s lead to two points with two minutes left. Sumner took on the point guard duties, completed a three point play, then responded to a Barea three by getting fouled on a three point shot, hitting all three to push the lead back to five. All in all, Sumner scored eight points in the last two minutes, going 6-6 from the free throw line, reminiscent of his game winning free throws last season against Atlanta.

Sumner was effective as the primary ball handler in that situation, which could help Nate McMillan and the coaching staff if A. Holiday is to find himself a starter. That could help give them options behind T.J. McConnell, who was masterful in his stretch in the fourth quarter, hitting a pair of jumpers over Boban Marjanovic and then keeping the play alive to find McDermott for a cutting layup after falling down.

The Pacers have looked good as a team thus far in scrimmage play after picking up their second win. They’ll next play on Tuesday afternoon, facing the San Antonio Spurs. It will be the last of the exhibition portion of the schedule, a final tune-up before Saturday’s crucial regular season matchup with Philadelphia.