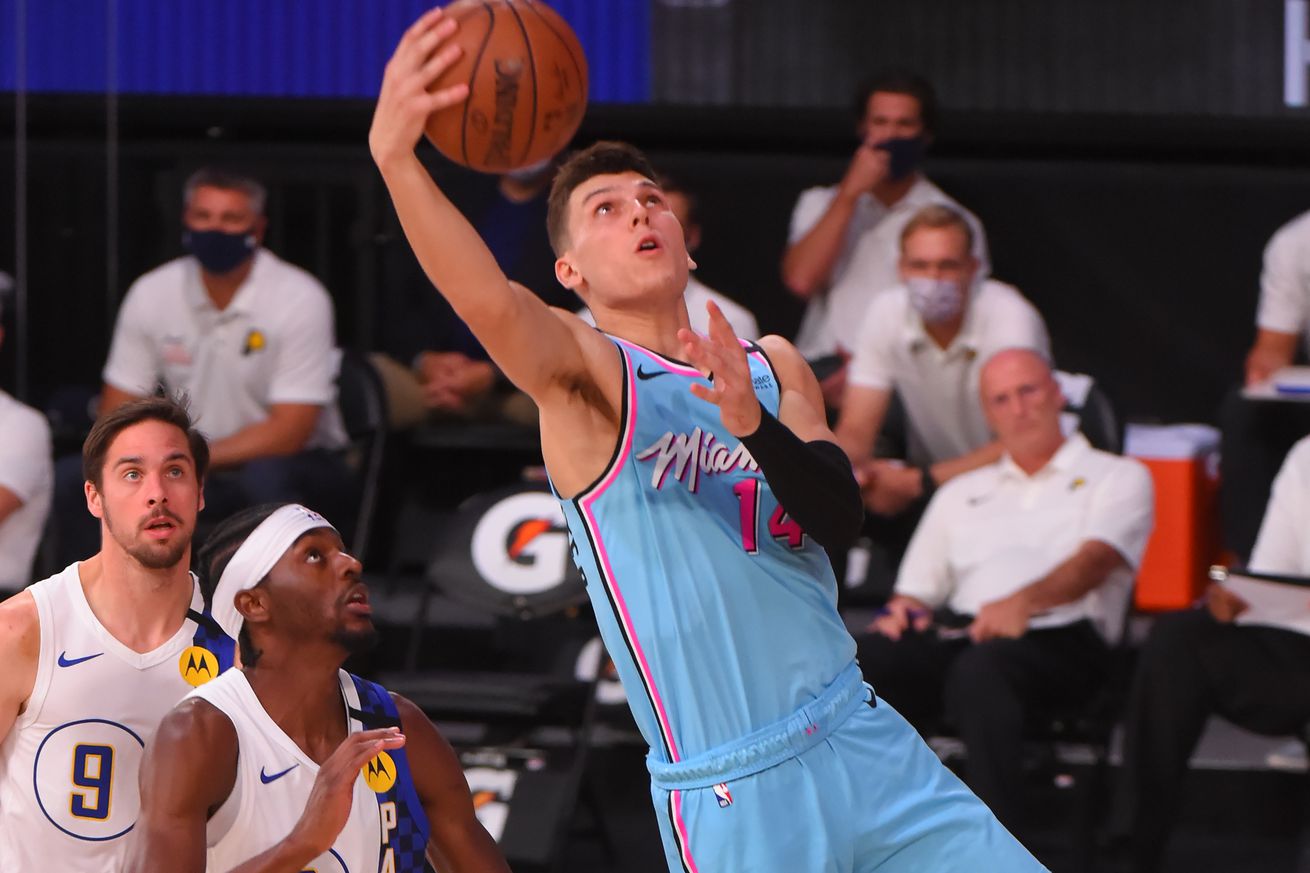 After playing to a draw in the first half, Miami blitzed Indiana out of the break, outscoring the Pacers by 22 and running away with the win. Victor Oladipo led the Pacers with 14 points.

There wasn’t much worth salvaging in the first of two regular season bubble matchups between the Indiana Pacers and the Miami Heat, which may be a problem for Indiana should these teams wind up facing each other in the first round of the playoffs. The Pacers didn’t appear to have any real answer for Miami’s activity on defense, nor their ability to hit threes, especially in the second half.

Indiana stumbled out of the gate, but were able to stay within striking distance thanks in part to a slow start from the Heat. Their (in particular Jimmy Butler’s) ability to get to the line allowed Miami to hold a 21-9 lead late in the first, allowing the Indiana second unit to climb back into it, cutting the lead to within four at 23-19.

In the second quarter, the Pacers played tough, but struggled to string together enough stops to not only go ahead, but to stay there. The Heat seemed to have a response locked and loaded for every Indiana bucket in the second quarter until Victor Oladipo broke a 44-44 tie to put Indiana on top by three.

That lead evaporated almost instantly, forcing Malcolm Brogdon to split a trip at the line to simply tie it up again, heading into halftime tied 48-48. Things fell apart quickly for the Pacers in the third quarter. Duncan Robinson and Jae Crowder hit back-to-back threes to open the half and the Heat were off and running.

The Pacers had nothing as a response. Their shots quit falling entirely while Miami finally found some sort of rhythm on their end of the floor. The six point lead became eight, became 10, and eventually 18 in the third as the Heat outscored the Pacers 37-23 in the third quarter.

The fourth quarter opened with Indiana taking one step forward and two steps back as T.J. McConnell brought some life into the second unit only to have Miami score six straight to make it a 20-point game. By the time the buzzer sounded, Indiana was outscored 66-44 in what was an absolutely abysmal half of basketball for the blue and gold.

The Pacers didn’t win a single statistical battle in this game. Even their 16-13 advantage at the free throw line came at a worse overall percentage despite both teams shooting well below 70% from the line. Beyond that, it was a checklist of weaknesses that were exploited. The Pacers were again dominated again on the glass, losing 59-45, but also 13-6 on the offensive end.

Miami was able to score 24 points off of those rebounds, coming away with points on 11 of their 13 boards. The Heat outscored the Pacers 56-40 in the paint, picking up nine blocks as a team to squelch easy scoring opportunities for Indiana. Things weren’t any better from beyond the arc. The Pacers had just six made threes through three quarters, the same number of triples the Heat made in the third alone.

There weren’t even any particularly outstanding performances. Oladipo led Indiana’s putrid offense with 14 points, a mark matched or exceeded by five different Heat players. Brogdon had 12, but did has some solid stretches defensively, also leading the way with eight rebounds and six assists.

The 12 he scored was the same as T.J. Warren, however, posting his most inefficient game of the bubble, shooting 5-14, only finding some semblance of momentum in the second quarter where he scored eight. Even when he managed to shake free from Miami double teams, his shot wasn’t falling, no matter what spot he hit.

Live ball turnovers were also a problem throughout the game. The passing was rarely sharp or on-point, allowing the Heat to pick up 11 steals. For the few positives, the second unit had a nice punch late in the first and for a brief moment in the fourth thanks to McConnell, but even he had troubles with ball control (committing three turnovers) and allowed Goran Dragic to go right back at him after an impressive start for McConnell.

The loss drops the Pacers to 4-2 in the bubble with two games remaining. The second of those two will be against the Heat on Friday, but in the meantime, the Pacers will face the Houston Rockets on Wednesday. Indiana’s magic number for staying in the 4-5 matchup remains two.