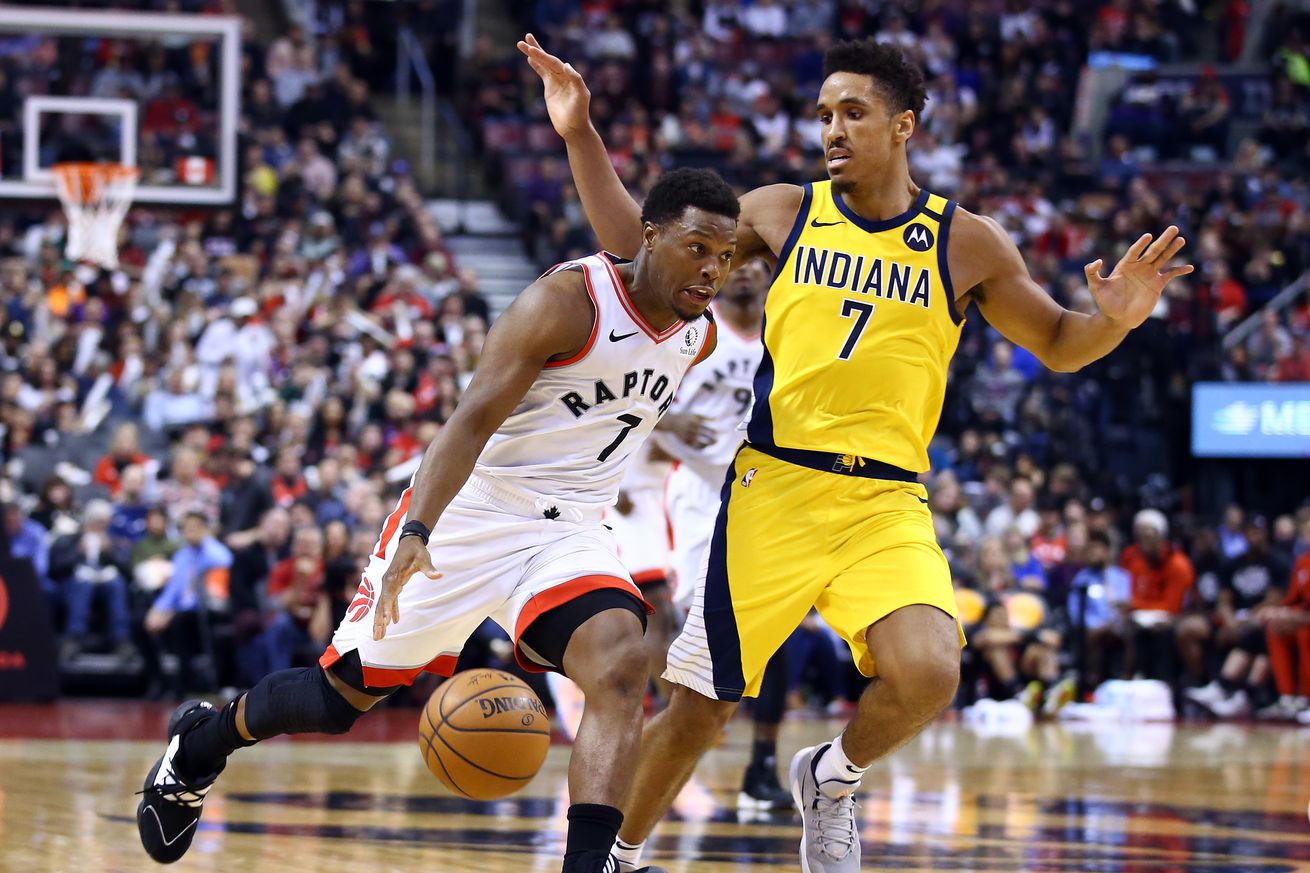 And the pluses and minuses of trying to replicate what Toronto does without Toronto’s roster.

Disruptive and aggressive. Those were the adjectives new head coach Nate Bjorkgren used to outline his coaching style last Wednesday while meeting with the media. Coming from the first branch to sprout from Nick Nurse’s coach tree, however, they’re also two words that aptly describe what the Toronto Raptors were able to bring to life last season in games against the Pacers, whether jumping out to a 13-1 lead in the blink of an eye behind zone defense or deploying a full-court press to spur a late-game, 11-0 run. Like the Raptors, who play a blend of man-to-man and zone and trap the post more than any other team in the league, Bjorkgren’s aim is for the Pacers to distort games by changing defenses and changing defenses frequently — a revolving approach which has the potential to protect against certain weaknesses while perhaps exposing others, if not properly mixed and matched.

Right off the top, the benefits of incorporating some of Toronto’s curveballs at the point of attack and against off-ball screens are clear. Rather than constantly chasing in rearview pursuit or tailing sharpshooters through mazes of picks, the Raptors execute the types of kick-out switches that are normally seen against mismatches in the post on the perimeter.

For example, checkout this defensive possession against the Pacers. Typically, when Justin Holiday flies off of a wide pin, most teams will either lock-and-trail him as the cutter with the big playing higher up the floor to protect against the shot, or the man guarding the ball will stunt toward him once the pass occurs so the big can hang back. But, look at what Fred Van Vleet does instead. This isn’t just a quick lunge at Justin; it’s a full-on switch, which allows Serge Ibaka to stay in front of Sabonis, with Patrick McCaw pealing onto T.J. McConnell.

Now, imagine if the Pacers had employed that type of coverage in on-ball situations against Miami, particularly when Goran Dragic was torching them for 14 points on 6-of-10 shooting in the fourth-quarter of Game 1. Per usual, Malcolm Brogdon was getting screened into oblivion at the point of attack against empty-side pick-and-roll actions, so why not allow Edmond Sumner to bump him over to Tyler Herro on the wing?

That way, Myles Turner wouldn’t have been as hard pressed to contain the ball and his man without, in reality, containing either.

Of course, defense isn’t only played against ball-handlers and another element that has to be considered along with the prospect of throwing a steady diet of change-ups is whether all of the defenders on the floor at any one given time can support rotating between presses and traps and other sorts of defensive concepts. After all, despite boasting the second-best defensive rating in the NBA last season, the Raptors ranked 29th in preventing opponent three-point attempts — a stat which not only reflects a dual-strategy of clamping down on drives and giving so-so shooters space to shoot, but also speaks to their ability to cover ground with length and speed.

Think of it this way: According to data from PBP stats, Pascal Siakam — all by himself — blocked twice as many threes last season (14) as Myles Turner, T.J. Warren, and Domantas Sabonis combined (7). As a team, the Raptors blocked 50 threes, tops in the league and more than twice as many as the Pacers (22). Granted, blocks aren’t everything, but what that number goes to show — even on relatively low volume by comparison to blocks that happen around the rim — is how quickly Toronto’s wing defenders, especially at the four-spot, can track down jump shooters.

Might as well throw three defenders at Devin Booker, when OG Anunoby can still race out to the corner to recycle a shot after providing help on a slot cut.

Or, how about Siakam. He finished this possession meeting Booker at the apex of his release in the corner, despite the fact that he had his his back turned away from the fade in order to focus on slowing down Ricky Rubio.

The Pacers aren’t going to make many of those plays with Myles Turner and Domantas Sabonis on the floor at the same time, and it isn’t just because they ended with blocks. On the season, Siakam led all players with 5.6 contested threes per game. Meanwhile, the Raptors as a whole forced opponents to shoot two percent worse than they normally would on guarded threes, forcing those shots to fall at just a 33.6 percent clip — which was the stingiest mark in the league, although a somewhat noisy stat outside of 6-feet. Even so, turns out, surrendering a high-volume of threes isn’t quite as damaging when the players loading up on dribble penetration and imposing post threats can also spray out to the perimeter like shrapnel, making even open shots seem contested.

Some of this applies to zone coverages, too. Most often, teams will try to attack a 3-2 zone with corner threes to flatten out the big men on the back line. The Pacers saw this first-hand last season in games against Brooklyn, Philadelphia, and Milwaukee.

By comparison to those long, somewhat lumbering contests, watch OG execute out of the same scheme, while also battling through a pin-in screen as an extra layer of encumbrance.

For a team that already struggles to corral missed threes, another drawback to playing Toronto’s 3-2 is the stress it puts on potentially weaker rebounders to box-out when teams are going after the corners and parting the back-line like the Red Sea. To be fair, Doug McDermott needs to stay attached to Ersan Ilysova as the screener, here, and call for Jeremy Lamb to jump over to Khris Middleton coming off the pindown so that Sabonis can fully commit to chasing Sterling Brown, but the point still remains that Sabonis has to chase Sterling Brown, which ultimately results in giving up second-chance points.

Combining zone and man-to-man principles at the same time is an option that Bjorkgren mentioned while appearing on The Dan Dakich Show with regard to triangle-and-two, but that type of junk defense can also result in vulnerabilities around the arc. With two chasers playing pass denial defense against two outstanding wing scorers (i.e. think Kawhi Leonard and Paul George), the other three defenders assume a triangle zone. If a pass goes below the free throw line, the bottom, ball-side triangle defender has to step out to play defense while the bottom, weak-side triangle defender has to shift over while also protecting against a skip pass, just as would be the case with 3-2 zone.

And what about full-court press? Here, the Raptors are in a 2-2-1 formation, with Siakam trapping the ball along the sideline and then positioning himself at mid-court to play the passing lane and look for an interception.

If Turner or Sabonis is held back as the “1” to play prevent defense, is the other really going to be able to move fluidly enough to transform the sides of the floor into death valley for dribblers while also staying cognizant of advance passes? To be fair, the Raptors got some help from the element of surprise and mistakes (get the ball to the middle of the floor!), but there’s no denying that Siakam’s hustle, agility, and 7-foot-3 wingspan played a significant role in weaponizing a high school defense into being an attack mechanism.

Of course, given that Bjorkgren indicated that he wouldn’t necessarily be married to a set rotation, downsizing in favor of speed in spots for some of these coverages would be an option with T.J. Warren at the four or if the team re-signs Justin Holiday; however, doing so would come at the cost of length and heft and also highlights a greater point with regard to comparisons between Indiana’s big-man pairing and Serge Ibaka and Marc Gasol.

Like Turner and Sabonis, the latter operates as a trigger man while the former spaces the floor and protects the paint, but they’ve operated in tandem mostly as a match-up wrinkle, not as two starters. For instance, during Toronto’s 2018-19 championship run, Ibaka and Gasol averaged 5.7 minutes per game together during the playoffs, with over 70 percent of their total minutes coming against the Philadelphia 76ers. Admittedly, playing big was an important adjustment to have in pocket for that series in order to avoid getting pounded on the glass and overmatched on defense, but part of the reason why the Raptors were able to clog the paint so effectively in the conference semi-finals was because they were rewarded for helping off of Tobias Harris, who shot 12-of-43 (27 percent) from three.

From there on out, Ibaka and Gasol played 24 minutes versus Milwaukee and only two against the Golden State Warriors. Fast forward to now (sans Kawhi Leonard), and with Gasol dragging at various points throughout the playoffs, the pairing played a whopping 10 minutes in the second-round against the wing-heavy Boston Celtics.

That’s why, from keeping opponents on their heals and forcing them to think to shoring up soft spots at the point of attack or around the rim when Myles Turner is out of the game, there’s definitely something to be gained from a continuously revolving defensive approach. And yet, as is the case with most everything that pertains to the Pacers, it’s hard not to wonder if the goal of creating chaos would be better served with the addition of a more mobile, and sturdy, stretch-four.