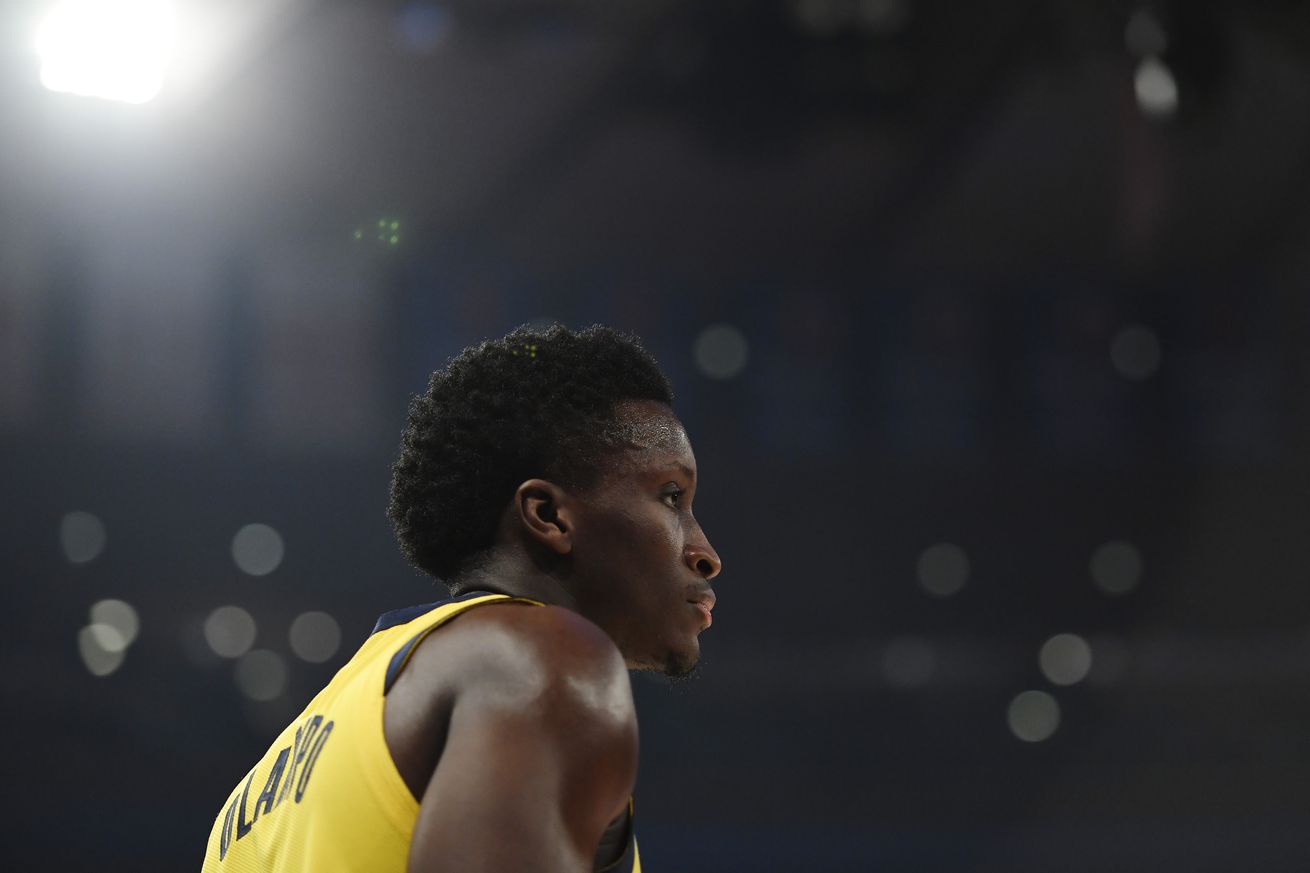 In only 13 games played, Oladipo has amassed nearly one-third of Indiana’s total charges drawn this season. Here’s how he’s doing it and why it matters.

With just north of four minutes to play and the Pacers clinging to a 108-104 lead in Dallas, Kristaps Porzingis faked out the defense with a keeper on a hand-off for Luka Doncic and appeared poised to ransack the paint. That is, until Victor Oladipo somehow managed to apparate from the weak-side corner to just outside the restricted area. Ambushed by the speedy guard’s teleportation act, Porzingis tried to pass out of the contact at the last second, but it was too late. Oladipo had already absorbed the hit from the big man’s 7-foot-3 frame, thereby drawing a charging violation.

Per the NBA’s hustle data, Oladipo has officially been credited for drawing eight charges this season, a mark which is double that of anyone else on the Pacers. And, here’s the thing: That number is slightly too modest. The above-detailed sequence, for instance, was categorized by play-by-play data as merely an offensive foul, rather than a charge. So, after combing through the film for all of his charges drawn, he actually has nine in only 13 games played, which is good for one of the highest per-game averages in the league, albeit on small sample size.

But wait, there’s more. With a strong feel for where opponents want to go and when they’ll get there, he also has a high rate of efficiency. In fact, with only two blocking fouls assessed to him on 11 bang-bang plays (i.e. not including low-blocking calls that are the result of tripping, bumping a cutter, or rebounding), Oladipo has successfully forced a turnover on 81 percent of his attempted charges. For point of reference, that matches the rate he posted last season prior to rupturing his quad tendon, and after missing a year of basketball, he’s already nearly tallied as many charge calls to blocking fouls (13:3) in 23 fewer games (9:2).

Plus, as if repeatedly sacrificing his post-injury body for the betterment of the team wasn’t enough, consider the measurables of the players who have been whistled for toppling him over. On average, with hits absorbed from the likes of Andre Drummond, Brook Lopez, Pascal Siakam, Julius Randle, Marcus Morris, and Porzingis, Oladipo has looked up to find someone with a 4-inch, 27-pound advantage on his 6-foot-4 frame.

That’s because, rather than scrambling to a spot after getting beat on a contest or yelling timber while wrestling with bigger wings in the post, the speedy guard is typically putting himself in the line of fire as a help defender.

Granted, his fearlessness has also made a few cameo appearances in transition, where his torso has bore the full brunt of Drummond’s bulk on the break.

But, where the two-time All-Star really makes his magic is as the low-man, popping up as if from nowhere to provide a last-line of defense while relying on the fail-safe of his closing speed. That’s what allows him to tag on an empty corner pick-and-roll and still be able to loop up from the baseline to contest a three, and that’s what gives him the latitude to slide over in front of drivers and rollers as the furthest away defender, even at the risk of abandoning shooters.

Nice try, pump fake. No poster dunks shall be had today.

Lack the heft to hold your spot on the block? Have no fear, help is here.

Not sure who is supposed to be checking Pascal Siakam? Abracadabra, here’s some clarity.

Admittedly, there are some occasions where he flirts with the edge of trouble as a roamer, especially with how far he comes off of shooters to provide support on side pick-and-rolls when Myles Turner is already closing without anyone on hand to fill passing lanes.

This, for instance, would’ve made for a really long contest on the X-out from JaKarr Sampson, if Kadeem Allen hadn’t of fumbled on the pass to the corner.

That said, when disciplined, Oladipo’s ability to plant himself in the direct path of drives as an extra defender still clearly fortifies Indiana’s coverage of penetration in a way that wasn’t possible when his prescient athleticism was on the shelf.

In that regard, and considering how noticeable it is that he doesn’t quite look like himself yet in other areas of his game, this particular aspect, which requires him to be unafraid of physical consequences after only just recently returning from injury, has been on par and, in some cases, better.