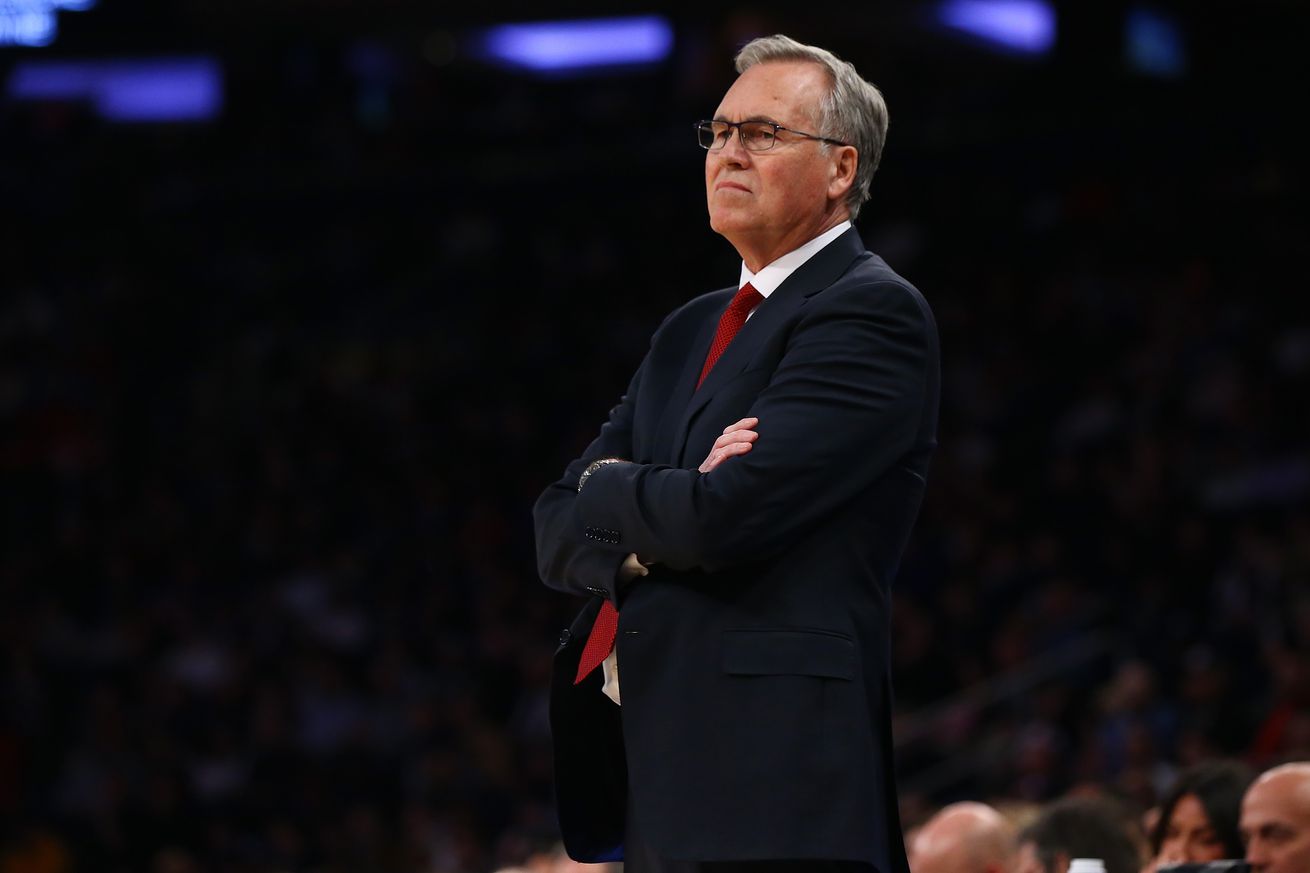 Known for inventive schemes and empowering individual playmakers, D’Antoni would give the Pacers added layers.

With the Pacers announcing last Wednesday that the team has fired Nate McMillan, the search for a new head coach begins now. According to ESPN’s Adrian Wojnarowski, current Houston Rockets coach Mike D’Antoni is expected to “be an Indiana target should he become available.” From the “seven seconds or less” Suns, bred on spread pick-and-roll and fluid pace, to the iso-ball Rockets, crafted around three-point shooting and James Harden’s ball-pounding, one-on-one wizardry, D’Antoni’s teams are consistently known for the sort of modernized innovation that Indiana reportedly covets, but they also rely heavily on the playmaking of standout individuals.

As such, what works as a base in Houston, where two defenders swarm one of the greatest scorers of all time with Russell Westbrook standing adjacent to attack 4-on-3, obviously isn’t going to be directly applicable for the Pacers. That said, a closer look at some of the read-and-react tactician’s scripted plays reveals that his system’s structure still has the potential to elevate and translate to a team without a stable of former MVPs.

With an offensive scheme rooted in getting to the line and spacing the floor, Houston rarely takes the time to enter the ball to the block, save for one player: Russell Westbrook, who leads all guards in post-up frequency, per Synergy. Granted, when the nine-time All-Star fails to “rock the baby” and instead gets rocked by his own shot selection, some of these possessions can get unruly, but imagine giving Sabonis the clear and ready sight lines to turn the post into a vehicle for assists within a more fluid framework.

Typically run for either Eric Gordon or Ben McLemore, the post-entry passer cuts through and then pauses in the lane just long enough to either run through a down screen or zip to the basket.

But, wait there’s more. Look at what McLemore does, here, when his defender chases him through the pick. Not only does he wheel around the screener, he sets a subsequent screen for the screener to pop.

In addition to providing options on top of options, compare and contrast the surrounding player movement on that possession to when Sabonis got flocked by defenders in Milwaukee.

Rather than muddying up the passing lane to T.J. Warren in the corner, Turner would be stationed at the free throw line providing a maypole for T.J. McConnell’s defender as well as a potential kick-out option for Sabonis. To that point, in the event that the Pacers ultimately decide to keep their current roster intact for next season, Turner and Sabonis could both play to each other’s strengths without taking anything away from each other — at least on the offensive end. Either way, whether playing big or preemptively downsizing, drawing fouls and launching threes doesn’t have to be mutually exclusive from turning the offense inside out through the team’s slickest passer.

No other team has embraced small-ball as much as the Rockets, but that doesn’t stop them from running plays that are traditionally associated with tall-ball. Take a look at this possession against the Mavericks, for instance. Right out of the gate, Houston went to horns, with P.J. Tucker, 6-foot-5, popping and Robert Covington, 6-foot-7, slipping.

To be fair, part of the reason why that play is able to function to that extent, with Covington all alone at the rim, is because Kristaps Porzingis was preparing to greet Harden above the level of screen, which most likely wouldn’t be the case with Oladipo or Brogdon. Even so, the surrounding spacing is still an upgrade over what the Pacers ran last season. For one thing, Indiana rarely put pressure on the four-man as a tagger, let alone made use of a double ball-screen with the opposite corner empty.

Here, the Pacers are loosely set up in “V” formation or horns, but instead of popping out beyond the arc and forcing Bam Adebayo to make a choice between bumping Sabonis on the roll and staying at home at the three-point line, Turner exited the action behind his defender and ultimately got bodied into a difficult layup under the basket.

Not only is that alignment cheating the Pacers out of added tension, it’s preventing Myles from being the first defender back in transition. That said, Adebayo proved content to take extra steps away from Turner on the perimeter during the playoffs, and even D’Antoni’s micro-ball Rockets still recognize the need to mix in rolls in order to vary their attack, pull defenders away from the ball, and counter against switches.

As such, just because the floor is spread, doesn’t mean there won’t be a place for inverse gravity — especially given the way that D’Antoni has morphed his system around the brilliance of his most skilled players in Houston.

A curl-cut preceding a stagger wherein the first screener flips around and flies off the second, this was one of Indiana’s favorite two-screen actions this season:

There was just one little problem: It was also one of the rest of the league’s favorite two-screen actions this season, and though the Pacers would sometimes switch up who played each role, there weren’t any baked-in wrinkles.

Enter, the Rockets, who run the exact same twirl-stagger set, except the cutter also has the option to create vertical spacing by sneaking in from behind and setting a back-screen.

Admittedly, Turner and Sabonis don’t play much above the rim, but the Pacers completed less than 20 alley-oops on the season — and that’s including layups as well as dunks. Therefore, not only would incorporating that extra twist bring added dimension to an already familiar action, it would also address a blind spot in the offense.

Put a pin in it

Including last season, Doug McDermott is now 2-of-17 from three with the Pacers in the playoffs, with only three attempts in the corners. Granted, not having Sabonis to run two-man game with against Miami certainly factored, but each of Indiana’s last two first-round opponents also had something very important in common: They switched on defense.

All too often, with Boston chasing him over and switching and the Heat packing the paint against drives, McDermott was limited to either passing out of contested shots or spotting up from the wings against defense with his off-ball movement all but neutralized.

The Rockets, unlike what happened with Brogdon and Oladipo out of isolation with Miami loading up at the elbows and the blocks, generate most of their corner threes via the playmaking of Harden and Westbrook, but they also have some unique plays in their arsenal that screen open standstill shots.

With a shooter in the corner and a wing lurking along the baseline, Houston will run a quick ball-screen on the left side of the floor while at the same time the wing slides over to either set a pin-in screen or come off a pin-in screen for a corner three.

In both cases, even if a switch is communicated, the baseline wing’s defender is going to have too much ground to cover to contest the shot with the shooter’s man trapped behind a brick wall. Another thing they’ll do that has the potential to force a long contest against a switch is setting a pindown for a big to then set a subsequent pindown.

On top of unlocking opportunities for shooters, an added benefit of that set is that it can also serve as a dummy action to occupy the attention of weak-side defenders and pry open driving lanes, which was largely a no-go against the Heat.

To that point, McDermott doesn’t have to be the player shooting to open up the floor for his teammates. Here, instead of getting chased through the stagger and simply clearing to the other side of the floor without any gains, Ben McLemore set an intentional pick on Hassan Whiteside, which resulted in a late-switch with Jeff Green popping open for three.

Whether firing away from deep or providing a distraction, Indiana’s sharpest shooters need to have more of a role in the playoffs other than being dusted by switches on both ends of the floor.

The Pacers got outscored by 4.9 points per 100 possessions in the 339 minutes that Brogdon and Oladipo played together last season — a net rating lower than that of the overall team (1.9). With scant opportunity to build on-court chemistry, some of the duo’s struggles in tandem can probably be chalked up to lack of experience, but their overall positional weirdness, with Brogdon at times too overextended and Oladipo not precise enough with his handle on the ball, suggests that the pairing could benefit from stronger crowd-control measures as well as an injection of rhythm and flow.

Though Houston ranks 30th in player movement as a byproduct of a system that’s tailored to rely on James Harden’s ability to shake help defenders like a snow globe, the bones for how to involve Brogdon and Oladipo at the same time without allowing them to get bogged down at the rim are still there.

On this possession, the Rockets, as the Pacers sometimes do, run 21-action or pistol (when two guards come together at the sideline for some type of two-man action) for Harden to cut to the basket, while the other three players on the floor are engaged in off-ball screening action rather than standing and waiting for the ball — as was largely the case on the weak-side for Indiana against the Heat.

All of which is to say that the Pacers don’t have a scoring engine the caliber of James Harden, but many of the choreographed elements that are currently supplemental in Houston could serve to accentuate Indiana’s top playmakers while also spreading the wealth to the three-point line and adding depth to a previously one-dimensional system.

If anything, when he has pieces that are amenable to adapting to change and capable of making the right passes at the right time, whether from the perimeter, on the short-roll, or out of the post, isn’t that the D’Antoni way?