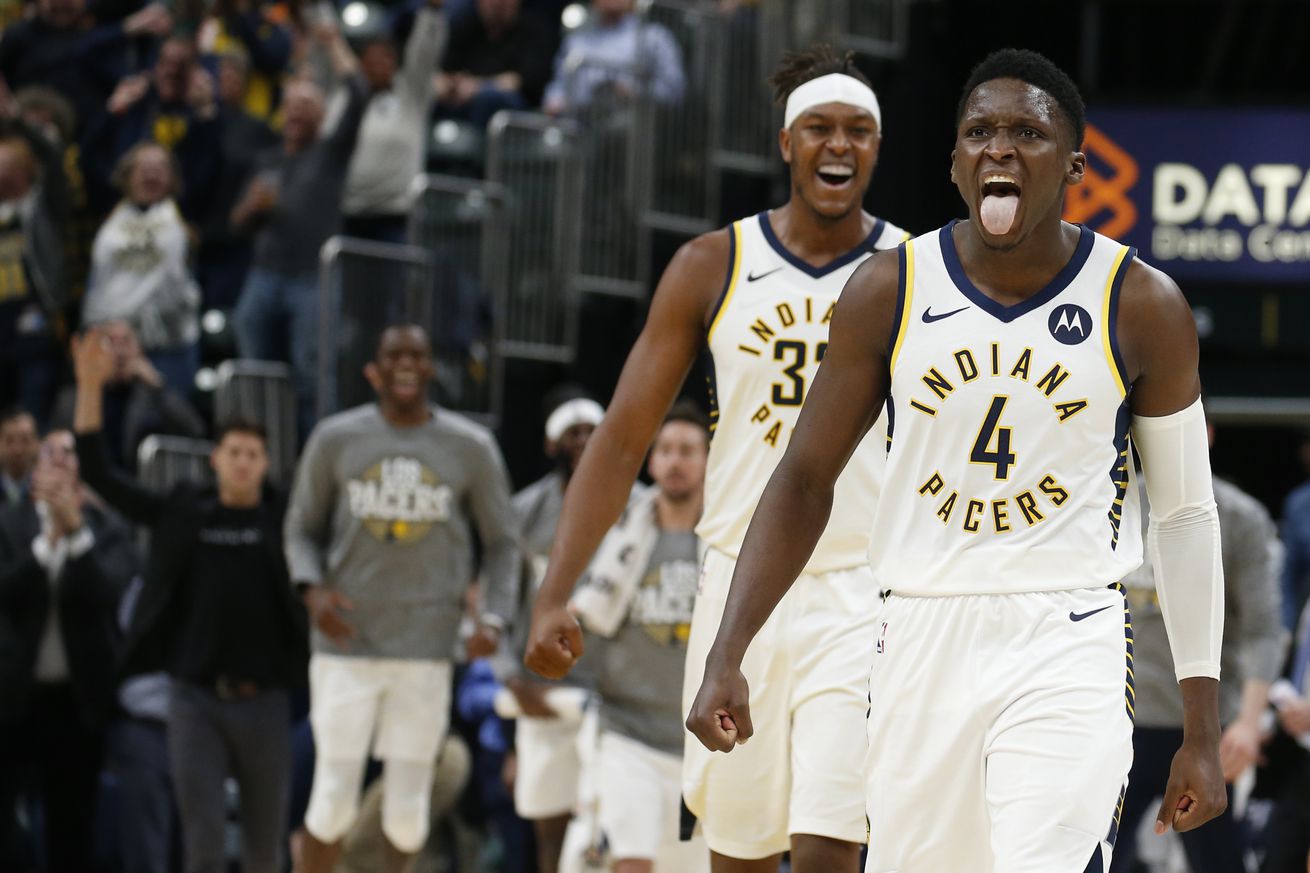 Going stir crazy? Need a distraction? Let us know what you miss most about the Pacers. Stay well, everyone!

With the NBA making the right decision to suspend the season as the world grapples with slowing the spread of coronavirus (COVID-19), returning to this space and knowing what to write about, let alone what tone to take, has been incredibly challenging. When compared to everything else that’s on the news right now, and everything else that very real people (perhaps even some of you) are dealing with around the globe, talking about sports online suddenly feels very trivial — or, at least more trivial than it’s always been.

And yet, with the temporary loss of the games that we obsess over has also come the loss of our preferred mode of escape when we arguably need it most. So, in the interest of self-care and for anyone else who could use a distraction or something to take joy in, here’s a list, in no particular order, of five things I already miss about watching the Pacers.

Surprise, surprise, I like gamesmanship. Give me all the possessions featuring parries, moves, and countermoves. This, for instance, from Indiana’s first of two road losses against the Raptors (yes, the one where they surrendered an 11-0 run to close the game) was perfect.

Well aware that Toronto was putting length on the ball at every opportunity, Malcolm Brogdon purposefully called for a pick from Justin Holiday, rather than Domantas Sabonis, so that he could lure Rondae Hollis-Jefferson to the point of attack and take advantage of Kyle Lowry as a sitting duck in the dunker’s spot.

Waving off Sabonis to instead later find Sabonis crashing to the basket for an easy two is the exact sort of NBA-checkmate that I can’t get enough of. I’m going to keep watching this on repeat until new episodes become available. Don’t judge me.

I like to think of myself as being at least somewhat decent at noticing nuance, but I must admit that it took SB Nation NBA’s own Mike Prada for me to pick up on the wonder that is Goga Bitadze’s bench closeouts.

Look at the technique! Textbook. On balance. Goga is the bench closeout king. pic.twitter.com/WWOxmpXB3Z

Now, however, Iike a trashy reality TV show that satisfies you in the best-worst possible way, I can’t stop watching his defense by proxy — or, rather, looking for it. And, let me tell you, it has levels. He doesn’t just try to influence shots from the sidelines; he lives vicariously through successes and failures.

Goga sideline theater is all that is pure and good right now. Protect him at all costs.

Battles waged in the shadows

Justin Holiday’s signature defensive moment from this season will most likely be the huge block he recorded in transition against the Chicago Bulls on March 6, but he’s also quietly mastered the art of shot-prevention.

Fast, long, and mobile, Justin is an expert at snuffing out options behind the scenes. For instance, Myles Turner deserves plenty of credit for scaring the heck out of Frank Ntilikina, here, on this dribble hand-off, but also please make note of who it was that initially denied Maurice Harkless on the flex cut so that Taj Gibson would have to flow into the next action.

Or, how about earlier in the same game when Jeremy Lamb came up with this steal out of the team’s 3-2 zone?

That doesn’t happen without Justin doing the hokey-pokey between the ball and his man.

Whether busting up plays or merely using his hip flexibility to slow down rollers before racing back out to his man, there’s plenty of defensive possessions where Justin is the stop that precedes a stop. Granted, he doesn’t always quite have the heft to avoid requiring double-teams when wrestling above his weight class on the block, but there’s still ample reason to be wistful for the things that he does away from the ball that have a tendency to go unnoticed.

With an offense built more around side-to-side action and screening for mid-range jump-shots than creative ball-handling or dazzling athleticism (h/t to Edmond Sumner scoring full-court layups versus defense in four seconds or less), the Pacers oftentimes find their wow moments in individual development.

As mundane as it may sound, there’s been something special this season about watching Myles Turner tap into his face-up game, be it shooting over the top in the mid-post against a switch or finding his sea legs against closeouts out on the perimeter. Sometimes, his drives can be clunky, as it seemingly doesn’t take much to knock him off his route as he streaks down the lane, but he has a knack for embodying “if there’s a will, there’s a way” with off-balance flip shots and leaning finger rolls while also showing flashes of handles.

More importantly, though, he’s been effective while taking the ball to the hole more than ever before. In 55 games played, Turner has made 42 of 71 shots (59 percent) that have come off at least two dribbles, as opposed to 42 of 91 (46 percent) a year ago. And that’s not even accounting for the fouls he’s drawn, or the fact that he’s already canned as many of those shots as last season on fewer touches per game and lower overall shot volume.

When teams pre-rotate to his popping spot in the playoffs (whenever that may be), Turner’s willingness to mix-in more post-ups without having to pass out of contested shots on the perimeter is going to matter. That’s why, especially given that he was less productive last season in the post-season than he was as a rookie, watching him subtly start to find his way as a more varied scoring option has been one of the most rewarding things about this season.

Even with injuries to Malcolm Brogdon and Doug McDermott, it felt as though the Pacers’ season had really only just begun before it was forced to stop. Aided by some hot shooting, Victor Oladipo finally started to look a bit more like himself against the Celtics, and after spending a large chunk of the season bending to opponents in terms of match-ups, the Turner-Sabonis pairing, at long last, logged over 30 minutes of action against Boston’s smaller front-line, compared to less than 15 minutes in December.

Given that the team also closed big against San Antonio’s severely depleted frontcourt on March 2, the decision to keep both Turner and Sabonis on the floor versus the Celtics, in what could potentially be a playoff preview, seemed like a possible tide turner in terms of evaluating the full-scale of the duo’s upside, and I was extremely here for it. Not only because two centers were on the floor together against a flock of wings, but also because of the way the coaching staff had started to experiment with their respective defensive assignments over the last several weeks.

For instance, in Cleveland, when Myles Turner struggled to hold his spot against Andre Drummond’s physicality, Sabonis took up the baton. Conversely, even at the risk of displacing his rim protection, Turner got the nod against Kristaps Porzingis’ stretch-shooting in Dallas as well as Giannis Antetokounmpo’s super-charged first-step in Milwaukee.

For the most part, those types of game-by-game adjustments weren’t happening earlier in the season, and sightings of roll-replace actions, with each of them darting in equal but opposite directions, were rare.

With postponed match-ups now dangling out there indefinitely against the likes of Houston’s small-ball system and LA’s trio of 6-foot-8 forwards (Paul George, Kawhi Leonard, and Marcus Morris), I only wish we could find out what happens next.